EADS, the Airbus people, gained a high degree of publicity with their four-motor Cri-Cri, as reported here previously, but a new contender has outraced it.

Didier Esteyne flew the EADS plane for the press and showed it to good advantage.  His mount was powered by four 15-horsepower electric motors, paired in pods on either side of the plane’s nose. The contra-rotating propellers gave a good performance judging from the in-flight video.

EADS’ 60 total horsepower gave it a top speed of 141 miles per hour, but that was eclipsed by another electric Cri Cri, this one with a single 25-horsepower Electravia brushed motor on each stalk.  Bigger motors swinging bigger propellers gave it a speed advantage and a world record of 262 kilometers per hour (162.44 miles per hour) , easily topping the Italian ENFICA-FC’s 135km/hr (83.7 mph) set earlier this year. 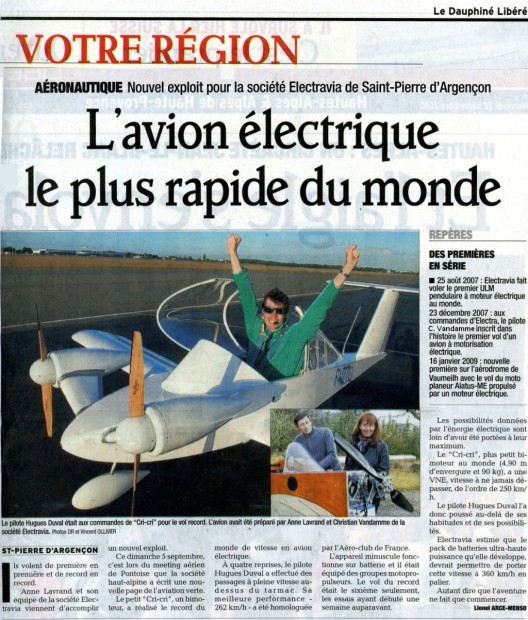 Propellers were made by E-Helice, a part of Electravia, headed by Anne Lavrand, who also founded APAME, the French Association For the Promotion of Electric Aircraft.  She has been responsible for inspiring several first flights in electric aircraft and is constantly pushing the limits of performance.

Electravia explains that optimization of motors and propellers made it possible to establish the speed record  with only 25 horsepower per motor, less than 75 percent of each motor’s maximum capacity.   They tout a 46 percent reduction in drag over the internal combustion-powered craft.

Michel Colomban, the plane’s designer, set the VNe at 250 km/hr (155 mph).  With Ultra High Power batteries that they sell, Electravia claims that pushing the GMPE 104 motors to 100 percent of their power (around 70 horsepower) would “make it possible to exceed 360 km/h (223 mph) on the level,” although losing the wings might make that a pyhrric victory.

Hugues Duval flew the record at an air meet in Pontoise, France.  The video shows this record flight, but as with so many things from France is all in French.  Pardon.