Fariss Samarrai of the University of Virginia reported on two fellow students and a faculty advisor who “printed” a two-meter (6.5 feet) wingspan airplane.

Third year engineering student Steven Easter was part a group that “built” a one-quarter scale Rolls-Royce turbofan replica using 3D printing, a method in which components are created from thin layers of material fused together.  Because the material used was plastic, the engine cannot be “fired up,” but is run with compressed air. It would be nice to think that all the pieces come out neatly finished and ready to go, but in this project, students had to add a great deal of hand finishing and assembly.

According to Popular Mechanics, “…[faculty advisor David] Sheffler gave the students CAD (computer-aided design) files for the 43 parts of the replica engine. But it wasn’t as easy as just plugging those instructions into a 3D printer. The students modified and refined those designs to ensure that the engine would run smoothly once printed, and Sheffler also tasked his students with building their engine parts within real aircraft tolerances. That meant that all the parts were printed in layers measuring 0.010 of an inch at a time. And the students had to manually machine down those parts that required even tighter tolerances, such as the fan and compressor blades, within 0.002 of an inch. ‘They essentially treated these plastic parts like they were real metal parts,’ Sheffler says.

“Finally, the class spent more than 150 hours assembling the engine. Though Sheffler, a 20-year veteran in aerospace engineering, did most of the design work, students made the crucial modifications to make their creation into a working replica.” Working with the exception of making fire, that is, since that would create a large blob of flaming plastic to clean up. The project could be made of real engine materials with metallic powders of the types used in actual manufacturing, but costs would be much higher.

Conventional drafting and manufacturing processes of five years ago would have taken four years and a quarter-million dollars to create the plastic turbofan engine. Students made it in four months for under $2,000, about $1,500  for the plastic and another $300 for the bearings, nuts, and bolts.

The student group posted their achievement on YouTube and were contacted by MITRE Corporation (a not-for-profit organization working with federally funded research and development centers -FFRDC) whose executives saw the video and offered posts for two summer interns to apply their talents on an unspecified project. Only Easter, a third-year mechanical engineering major, applied, calling MITRE on the last day for applications. For the interview, he brought lab partner Jonathan Turman along, and they were signed up to build an unmanned aerial vehicle (UAV) using 3D technology. They had from May to August to complete their project and present it for study by the U. S. Army.

Easter and Turman worked with advisor Sheffler, a mechanical aerospace engineering professor at the University, and found that the airplane, relatively simple compared to the jet engine, still required 80-hour work weeks and “many long nights in the lab.”  The University has seven 3-D printers in its Rapid Prototyping Lab, “used as real-world teaching tools.” 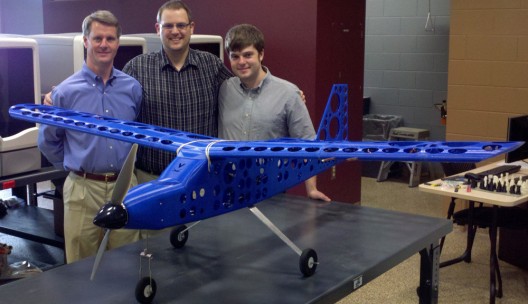 U of Va's 3-D plane with creators

“’It was sort of a seat-of-the-pants thing at first – wham, bang,’ Easter said. ‘But we kept banging away and became more confident as we kept designing and printing out new parts.’ Sheffler said he had confidence in them ‘the entire way,’” according to the University press release.

The small team assembled and made four flights in August and early September The airplane managed 45 mph in cruise, but did have a minor incident which required replacing the nosepiece. Sheffler noted that this allowed one of many demonstrations of 3-D printing’s “fluid” ability to produce small parts quickly. It also allowed the team to modify parts as they were designed, printed, and fitted into the overall craft. 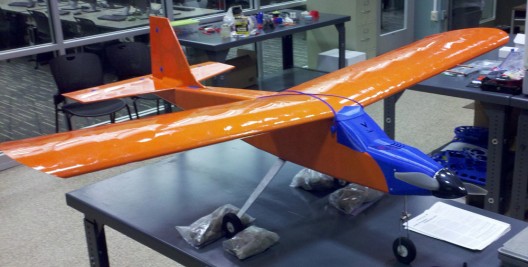 MITRE representatives and Army officials observed the fourth flight of Easter and Turman’s plane, and MITRE  has asked the students to complete the academic year as part-time interns and build a “Lighter, stronger, faster, and more easily assembled” airplane. The project will be their fourth-year thesis, one of the nicest work-study programs imaginable.

It is instructive to compare the Virginia airplane with the geodetic construction crafted by students at University of Southampton in England last year. That airplane was designed and fused to allow snap-together assembly, although reports on that project did not mention any hand finishing required. The Virginia students essentially built an airframe that required covering with some thin film such as that found on model airplanes.

EADS, the Airbus people, have experimented with various 3-D printing projects, with the idea of having printers make on-site spare parts for aircraft in the field. The same technology could be used in war zones to create replacement parts for drones, or even complete aircraft, even their actual electric powerplants.