A mild kerfuffle rustled through the mostly male audience at the fourth annual Electric Aircraft Symposium when the title of Natalie Jeremijenko’s presentation was announced. The somewhat befuddled response to “Wetlandings are the New Black: Grounding the Environmental Performance of New Flight Infrastructure,” indicated that many Symposium attendees were not GQ subscribers, or ever thumbed through their wive’s copies of Elle or Vogue. But Ms. Jeremijenko’s theme and stylishly-layered variations met with a favorable reaction as she launched into the exposition of her idea.

According to her biography on the Environmental Health Clinic web site, “Natalie Jeremijenko is an artist whose background includes studies in biochemistry, physics, neuroscience and precision engineering. Jeremijenko’s projects—which explore socio-technical change—have been exhibited by several museums and galleries, including the MASSMoCA, the Whitney, Smithsonian Cooper-Hewitt. A 1999 Rockefeller Fellow, she was recently named one of the 40 most influential designers by I.D. Magazine. Jeremijenko is the director of the environmental health clinic at NYU, assistant professor in Art, and affiliated with the Computer Science Dept.”

Her suggestion for the environmental health of future flight is to take advantage of the eight percent of the United States that is waterways. It is a readily available infrastructure, and her recent work with ICON Aircraft has made her more aware of the opportunities that exist to use this resource as an extension of green aviation. This is part of a “new uban mobility” that does not involve building more roads or parking garages. Even creation of a small pond, as a practical way to enhance personal flight, would cost only $5,000 for each of the 500 to 750 feet required for a wet landing zone, considerably less than the costs involved in the building of even modest land-based airports. 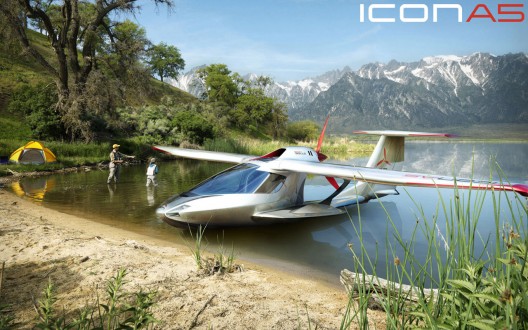 The Icon A5 in its wetlanding environment

Existing water areas could be the subjects of remediation and the preservation of biodiversity “hotspots,” while increasing the recreational and commercial use of otherwise degraded wetlands. This win/win philosophy seems to be part of the “playful strategies” described in her biography.

The “mediagenic” aspect of her work is part of Jeremijenko’s artistic background but helps make dramatic statements that capture the public’s attention. That, coupled with Jeremijenko’s ability to link her efforts with those of engineers and scientists, provides a way for the public to gain respect for and understanding of concepts that might otherwise elude general interest.