With merchants beating the drums of commerce to lure you to their stores and web sites for holiday cheer (at least for the merchants), your editor has some alternative giving suggestions that could help bankroll the future of aviation (if not aviation futures).  Each of these projects would welcome funding, and each has much to give back to all of us.

Put Your Face in Space

The Perlan Project has initiated a fund-raising program on Indie-Go-Go, with the immediate goal to complete construction of the major parts of Perlan II, a high-performance, high-altitude research sailplane recently featured in the New York Times.  Its planned mission to 90,000 feet in the Polar Vortex could give us new and profound understanding of global climate change, the ozone hole and greenhouse gases. 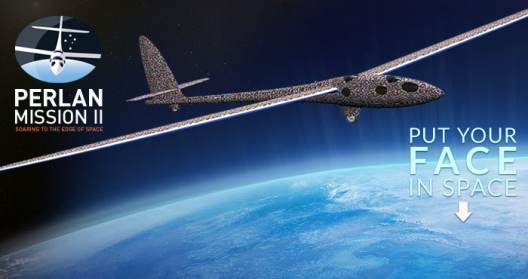 For a mere $15, you will, “Receive a professionally edited digital video of the entire Perlan Mission II aeronautical exploration, atmospheric science research and record breaking flights.”  For another $14, you will have your thumbnail-size (1 x 1 inch) image affixed to Perlan II’s fuselage.  More money gets you bigger, better perks, including being part of the ground crew or flight test crew for $5,000 and $10,000, respectively.

Synergy, John McGinniss’ radical departure from traditional aerodynamics, made the May, 2013 cover of Popular Science, and the lead page of their article on the “Ten Best Prototypes of the Year.”   Editors admired its potential to be a relatively inexpensive people hauler that would be quieter and three times as fuel efficient as conventional aircraft.  The double box-tailed configuration, slated to reduce drag and increase flight stability, coupled with the large wings, should make high-speed personal air travel a realistic expectation.  Its 200-horsepower Diesel engine will allow great fuel economy, and the autopilot and ballistic full-aircraft recovery parachute will help make it a safe traveler. 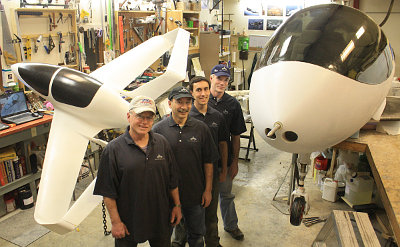 John has been putting in long hours and the dedication of his family and friends to make his dream come true.  Donations to the cause could help make a full-scale Synergy a reality at AirVenture 2014 (your editor’s guess and hope).

A Sunseeker Made for Two

Eric and Irena Raymond shared part of the prize in the 2013 Berblinger Competition after being selected by a jury “made up of representatives from the aviation and space industry, universities and research institutes, and from the City of Ulm.”  The couple’s Sunseeker II project won the Berblinger Flight Competition in 2011. 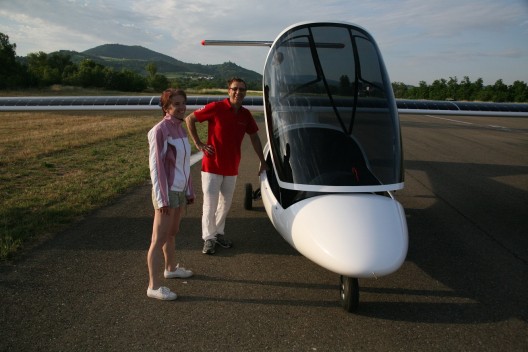 Irena and Eric Raymond with their two-seat, solar-powered Duo

While other entries made use of hybrid drive systems and range extenders, the sun may be the greatest range extender of all, and will power the Duo as the dynamic duo inside explore the edges of the envelope for practical solar-powered flight.  You can help support this potential production aircraft (imagine having one in your driveway instead of the latest supercar) with a holiday gift to the project.

Solar Impulse Heads toward a Second Round

With HB-SIA having flown around Europe, stayed up all night, crossed the Straits of Gibraltar and conquered the Moroccan desert, then flown across the United States (23 years after Eric Raymond), the Solar Impulse team has made very public the idea that we can accomplish much on mere sunlight.  They are now working on a bigger craft, HB-SIB, intended to make an around-the-world tour.

The Solar Impulse crew has many ways to gain your support, and they give nice presents in exchange for your encouragement.  Their Little Prince badge, for instance, commemorates the spirit of Antoine Saint-Exupery’s classic story, and is something that will look great on a flight jacket or child’s backpack. 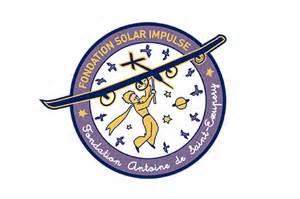 Solar Impulse explains, “You might have noticed it during the last leg of the Across America mission on both Bertrand (Piccard) and Andre’ (Borschberg)’s pilot suits. The badge and the special edition of the Little Prince landed in New York City to commemorate the 70th anniversary of the publication of this world renowned book.

“Designed by Solar Impulse and the Antoine de Saint-Exupery Youth Foundation, the proceeds from the sale of this exclusive badge will finance both Foundations’ educational activities.”

They also offer other badges, and the opportunities to “adopt” a solar cell (your editor chose 1776 on the left wing), have a guided tour of their Lausanne, Switzerland hangars and get your name emblazoned on HB-SIA’s fuselage.

Each of these projects can use our support and is worthy of our encouragement.  Each helps people see the future that might be, and anything that provides that kind of positive view can benefit from our support.