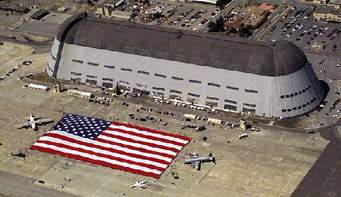 How about exploring a softer, gentler form of flight?  Certainly, gas-filled envelopes provide a large way to transport goods and people, but for a variety of reasons, have fallen out of favor in recent years.  Several entrepreneurs are trying to revive an old idea.

Hanging Over Our Heads

One threat hanging over our heads is that of plummeting drones, either having exhausted their short-range batteries or banging up against a tall building.  The infamous video of a drone falling onto a woman in Seattle has been removed from YouTube, probably for legal reasons, but an abundance of others are there for your viewing pleasure.

Alfred Lord Tennyson wrote a prescient bit of poetry in 1835, envisioning future flight into an age where Amazon might be using electric blimps to deliver necessities and frivolities worldwide.

For I dipt into the future, far as human eye could see,

Saw the Vision of the world, and all the wonder that would be;

Saw the heaven fill with commerce, argosies of magic sails,

Pilots of the purple twilight, dropping down with costly bales;

Tennyson included the elimination of armed combat and the reign of “universal law” within his prophecy, but one out of two isn’t all that bad.  Today, we see several contenders to bring blimps and even Zeppelins back.

Egan Airships, a Seattle-based company, has created the Plimp,   The twin brother founders have Tennyson-like aspirations for their craft.  “Imagine the lift of a plane with the control of a helicopter and the buoyancy of a blimp, and you have the vision of our PLIMP Airship. A patented plane-blimp hybrid, the PLIMP Airship features dynamic wings―enabling it to hover, dip, ascend, bank, or spin―while effectively and uniquely supporting applications like advertising.”

With no fear of their hybrid plummeting from the skies, the brothers see a big role for Plimp in advertising, being able to hover over crowds with capabilities, “Superior to Plane or Blimp type engagement[s].”  They see other uses such as pipeline inspections, agriculture and wildlife monitoring, surveying and mapping and even military deployment.

The 28-foot long, seven-foot in diameter, 55 pound maximum weight ship can stay aloft an hour on its lithium-ion batteries which power twin electric motors.  It can carry a maximum payload of five pounds up to 20 miles at a cruising speed of 30 mph.  Its top speed is 40 mph.  Stopping the motors will cause it to drop its speed to nine mph and descend gently.  Plimp can take off and land vertically, and like a helicopter, fly forward, backward, and hover.

James and Joel see Plimp as the first significant new type of aerial vehicle since the helicopter.  Here the lawyer/architect team explain the pluses of the Plimp.

Others are attempting to at least revive the lighter-than-air concept, with varying approaches.

Amazon sees a possible future in carrying its own costly bales under a giant gas bag, and Walmart, ever ready to pull off a competitive coup, has filed its own patent for a large airship to carry its goods to market. 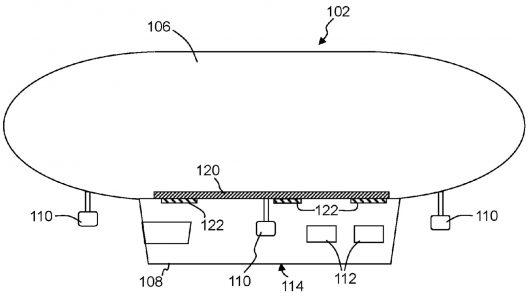 Walmart’s patent drawing for its flying delivery vehicle, noting details of its construction and operation

Engadget reports, “The concept isn’t completely new, of course (Amazon filed for a similar patent in 2016) but Walmart goes into exacting detail. Blimps would fly at altitudes up to 1,000 feet and talk to a remote scheduling system that indicates when drones should fetch packages from inside the blimp and head to their destinations.”  Engadget notes the firms’ contentious rivalry to dominate Internet sales, further explaining that since Amazon is experimenting with drone delivery, “Walmart might not have much choice but to deploy blimps if it wants to keep up. In short: the skies are about to get very crowded.”

Amazon actually speaks of having a growing empire, a bit of grandiosity that would include everything from their current Prime delivery services to blimps supplying food and souvenirs to attendees at large outdoor event.  The company sees itself expanding into building wind turbine farms in Texas and brick-and-mortar stores in cities throughout the U. S., all supplied, apparently by an airborne flotilla of airships and drones.

Sergey Brin, one of the co-founders of Google along with Larry Page, has a project in Moffett Field’s Hangar Number Two.  It’s big, potentially the length of two football fields, and likely to test the limits of even Brin’s disposable income.  Able to carry up to 500 tons, the Zeppelin-like airship is being kept under wraps for now.  Apparently, it was planned to use hydrogen gas for lift, but the FAA prohibits the use of flammable gases in such vehicles – doubtless a callback to the Hindenberg’s unhappy demise.

Rumors float around like mini-thought-airships concerning the machine and its uses.  The Guardian reports, “Brin wants the gargantuan airship, funded personally by the billionaire, to be able to deliver supplies and food on humanitarian missions to remote locations. However, it will also serve as a luxurious intercontinental “air yacht” for Brin’s friends and family. One source put the project’s price tag at $100m to $150m.”

Alan Weston, former director of programs at NASA Ames, is directing this project for Brin.  Taking a more defined view, he explained to Bloomberg News the efficiency he sees in a very large airship.  “New airship technologies have the promise to reduce the cost of moving things per ton-mile by up to an order of magnitude.  It depends on the size of the airship. A larger airship can reduce costs a lot more than a smaller ship, but there’s design of a class of vehicles that can lift up to 500 tons that could be actually more fuel-efficient than even a truck.”

Perhaps Brin will include a hydrogen (safely contained) or battery-powered system to propel the airship on its journeys.  Little has been revealed and we’ll probably only know for sure when the new-age Zeppelin makes its appearance over the Bay Area.

In the meantime, plenty of people are exploring the new possibilities of lighter-than-air drones and transport machines.