Rinaudo spoke to Fortune’s Brainstorm Health Conference in San Diego, and explained how his Silicon Valley technology delivers 60-percent of Rwanda’s national blood supply – by drone.  About half of the blood goes to mothers suffering from postpartum hemorrhaging.

With excellent results in Rwanda, Zipline will set up four distribution centers in Ghana, starting on April 24.  These centers will serve about 20 million people.  Fortune explains, “For Rinaudo, drones are a way for a nation to access universal health care almost overnight. Call it a golden idea.”

Time is Worth More than Money in the Medical World

Evan Ackerman and Michael Koziol report in the IEEE Spectrum that they drove from “the small town of Muhanga to the even smaller town of Kinazi,” a 50-kilometer journey.   It took “well over an hour” to rendezvous with a Zipline drone that made the trip in under 14 minutes.  Granted, the roads in Rwanda are pretty awful, and there are thousands of hills encroaching trucks along the way, the two-motor drone does show some “zip.”  The writers arrive in time to see the drone open its bombay-like doors and drop a red parachute carrying containers of blood near the local hospital’s parking lot. 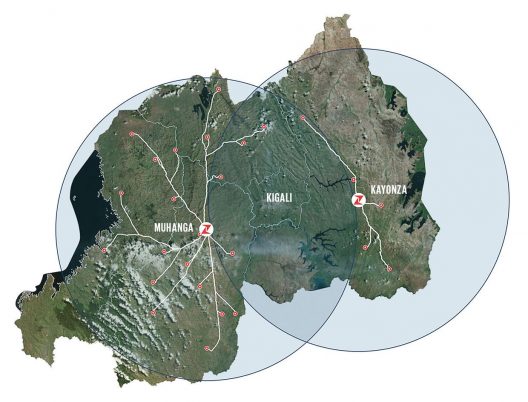 Zipline relies on some pretty sophisticated infrastructure in a country with roads sometimes hardly worthy of the name.  Despite having been in the throes of a civil war and genocide in the 1990s, the government started a program called Vision 2020 that emphasized technology infrastructure, including fiber optics and 4G cellular networks that now cover 95 percent of the population.

On its web site, Zipline numbers its life-saving deliveries, counted at 13,824 last night when your editor started his research, and now at 13,864 less than 18 hours later.  How does Zipline manage such productivity?  From its distribution centers in Muhanga and Kayonza, and with drones capable of flying 80 kilometers (49.6 miles) each way out and return, Zipline can deliver to virtually any hospital in the small country. 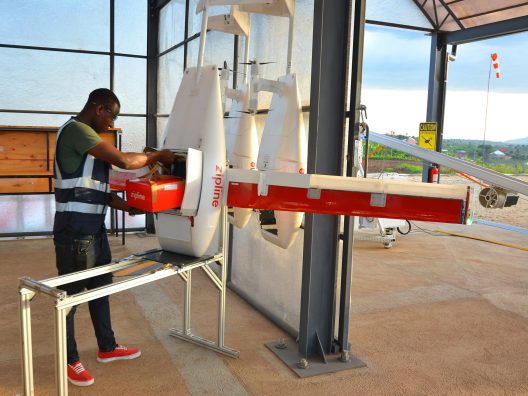 The drones are stacked neatly at each distribution, or fulfillment center, with battery packs being charged and cargo holds awaiting their precious cargo.  A WhatsApp message comes in to the “nest,” as Zipline calls its fulfillment centers, and workers have the drone ready to deliver in no longer than 10 minutes.  (Operators want to shorten that to one minute.)  When a technician plugs the battery pack into the airplane, he or she has also loads the flight plan as part of that pack.  Another technician loads a box containing the blood or other required cargo in the bomb bay.  The team mounts the wings in place and secures them with what look like a pair of over-center latches.  Scanning QR codes, workers perform a pre-flight checklist with what seem to be failsafe precision.

With only a few major components to be assembled before each trip, Zips, as the drones are called, are simple, meet the range requirements for the mission, and have redundancy in things like dual motors and dual ailerons to ensure successful completion of that mission.

Future plans call for lighter battery packs and 1.75-kilogram (3.85-pound) payloads compared to the 1.3 kilograms (2.86 pounds) currently carried, enabling the Zips to deliver three blood packs instead of only two.  IEEE reports, “It will also have a receiver for transponder signals from other aircraft, a backup communication system that uses a satellite link, and onboard sense-and-avoid equipment that will, [Eric] Watson (a systems engineer at Zipline) says, “be able to detect and avoid uncooperative aircraft in our airspace.” This advanced feature will likely become a safety-critical system for delivery drones as the skies get more crowded.”

That’s an innovation-packed future for the tiny country, and it shows a way to integrate such drones into even our own crowded airspace. 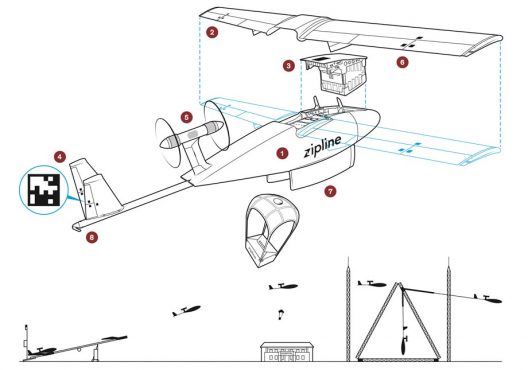 Zipline’s drones are modular. When an order comes in, technicians snap together the three main components: the lightweight foam chassis [1], the wings [2], and the battery unit [3], which also contains the flight plan. Scanning QR codes [4] initiates automatic preflight tests of the drone’s systems. To keep the drone flying in the event of a minor mechanical failure, it has two motors [5] and redundant ailerons [6] on the wings that help maintain flight control. The drone’s cargo compartment [7] contains the package of blood until it’s parachuted down to the delivery site.To obviate the need for a lengthy runway for takeoffs and landings, an electric catapult launches the drone, and a wire strung between towers captures the returning drone by snagging a 3-centimeter metal hook [8] on the drone’s tail.  Illustration: Chris Philpot

The full IEEE article appears in the May 2019 print issue as “The Blood Is Here.”