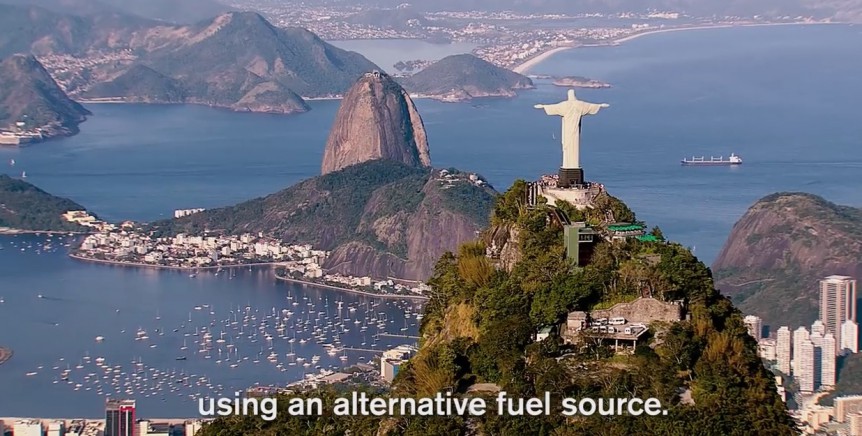 PEMs (also known as polymer electrolyte membrane fuel cells) require an expensive catalyst such as platinum, and hydrogen as fuel. Hydrogen itself is costly to produce and runs up the operating cost for such a fuel cell.

Nissan Motor Co., Ltd. timed things to coincide with the 2016 Olympics opening in Rio de Janeiro, Brazil for the introduction of their solid oxide fuel cell vehicle, a van that runs on bio-ethanol electric power.  Nissan’s Carlos Ghosn claims this to be a first, with benefits for potential users.

“The e-Bio Fuel-Cell offers eco-friendly transportation and creates opportunities for regional energy production…all the while supporting the existing infrastructure. In the future, the e-Bio Fuel-Cell will become even more user-friendly. Ethanol-blended water is easier and safer to handle than most other fuels. Without the need to create new infrastructure, it has great potential to drive market growth.”

The e-NV200 van, reputedly necessary as the prototype because of the relative bulk of the SOFC system, runs on 100-percent ethanol and charges a 24 kilowatt-hour battery from its 5 kilowatt fuel cell to produce a cruising range of 600 kilometers (372 miles) – a figure certain to capture the interest of future customers.

Now touring public roads in Brazil, the e-Bio Fuel-Cell vehicle, announced by Nissan in Yokohama last June, has a powertrain that “is clean, highly efficient, easy to supply, and it runs on 100-percent ethanol or ethanol-blended water. Its carbon-neutral emissions are as clean as the atmosphere, which will be the part of natural carbon cycle. Also, the e-Bio Fuel-Cell offers the brisk acceleration and silent driving of an EV, along with its low-running costs, while boasting the driving range of a gasoline-engine vehicle.”  All this is according to BiofuelsDigest.com, certainly a cheerleader for this approach to mobility.

Theoretically, the use of ethanol, controversial in its use in gasoline-powered cars, allows integration into existing infrastructure.  One thought is that since the test vehicle holds only 30 liters (roughly eight U. S. gallons) for its competitive range, “people may only need to stop by small retail stores to buy fuel off the shelf.”  One imagines two-liter bottles of the fuel, easily carried by most shoppers.

Made primarily from sugarcane (abundant in Brazil) and corn (abundant in America’s Midwest), ethanol and ethanol-blended water would be problematical in using food crops to make fuel.  That criticism might be mitigated by the van’s possible 46.5 mpg fuel economy on ethanol.

The U. S. Department of Energy notes, “the Renewable Fuel Standard (RFS) limits the amount of ethanol produced from starch-based feedstocks to 15 billion gallons. This ensures there are enough feedstocks to meet demand in livestock feed, human food, and export markets.

The potential for cellulosic ethanol in the coming decades

The Department show cellulosic sources for ethanol, including corn stover,  wood waste, and the ever-popular but seemingly elusive switchgrass, as viable substitutes for food-based feedstocks for the liquid fuel.

“They are either waste products or purposefully grown energy crops harvested from marginal lands not suitable for other crops. Less fossil fuel energy is required to grow, collect, and convert them to ethanol, and they are not used for human food.”

Nissan hopes to realize “a zero-emission and zero-fatality society for cars,” certainly part of many efforts by government, industry, and academia lately.  Nissan states they, “Will continue.. to promote vehicle intelligence and electrification. Nissan’s brand promise of ‘Innovation That Excites’ is delivered with ‘Nissan Intelligent Mobility,’ which focuses on how cars are powered, driven and integrated into society through a more enjoyable driving experience.”

Now, start working on making this system more compact so it will fit in a light airplane.