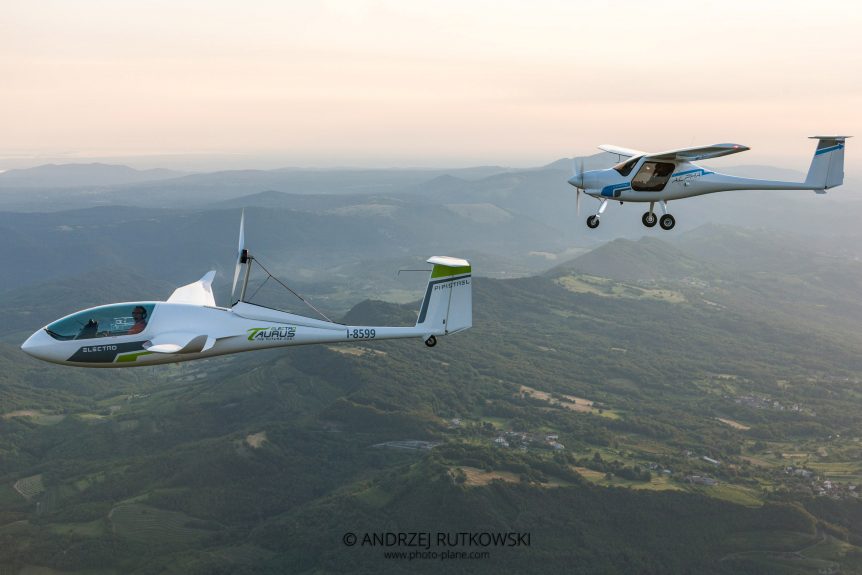 The Pipistrel Velis is the culmination of 13 years of electric aircraft development and the first to gain certification by the European Union Aviation Safety Agency (EASA) on June 10.

Pipistrel has been in the electric airplane business since 2007 when it announced the Taurus Electro motorglider, which entered service in 2011.  That aircraft went through several iterations, and is still part of the Pipistrel lineup of electric planes, which includes the Alpha Electro Trainer, the Panthera Hybrid, and the new Velis.

An electric version of the Alpha Trainer, the Electro has been in production since 2015.  With an empty weight of 615 pounds (279 kg) and a maximum take-off weight of 1,212 pounds (550 kg), it is a bit heavier than the Rotax-powered gas version, and carries about 100 pounds less payload.  Both have similar performance, though, with rates of climb around 1,200 feet per minute.

Joseph Oldham started a well-organized, well-intentioned operation to bring electric flight to California’s Central Valley.   His Sustainable Aviation Project aims to train low-income young people in electric training craft and give them a different direction in life than otherwise might be possible.  Beth Stanton, an aerobatic pilot and writer for the Experimental Aircraft Association’s Sport Aviation, flew with John in an Alpha Electro recently and wrote about it in the July issue of EAA’s magazine. 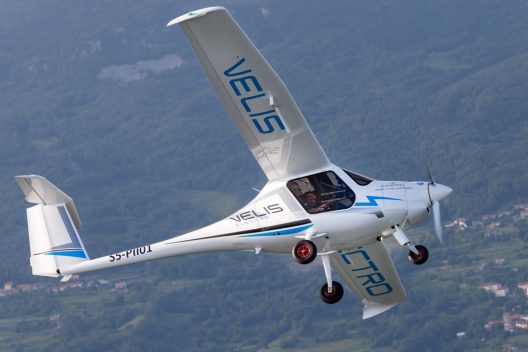 Michael Coates republished it in the Pipistrel USA newsletter number 130, where it details the careful planning and execution of getting four Electros through 100 hours of flight in the heat of the Central Valley.  Oldham even went to the trouble of creating an air-conditioning hookup to keep batteries from overheating.  His efforts allowed him to achieve 175 hours in different Electros, 111 in one example.  That batteries survived the long, hot days of summer was a major victory, although the air-cooled motor controllers often reached the limits of their operating temperatures.  Pilots applied limits to keep things cool, but the airplanes still performed better than one might expect.

Beth reports, “At full throttle, the Alpha Electro jumped oﬀ the runway faster than the gas-powered version. As we cruised around the valley, I noticed that it had more docile handling characteristics compared to the gas-powered version. Joseph said that the electric motor has smoother power than a four-cylinder combustion engine. I was careful to keep coordinated ﬂight, as any tiny amount of drag decreases eﬃciency (and time aloft). It was surreal to glance at the SOC reading as opposed to the familiar fuel, engine, and oil gauges.”  She has vowed to return for further training, “Once these babies are certiﬁed for instruction, I’m going to be ﬁrst in line to get checked out to ﬂy them.”

The new Velis has added liquid cooling to its motor, controller, and batteries to enable its use even in hotter climes outside its Slovenian homeland.

“As part of the Type Certification, Pipistrel demonstrated that Velis Electro achieves the highest levels of safety, even surpassing those required for conventionally powered aircraft.

“Velis Electro is a full-electric derivative of the proven Virus SW 121, which is already type certified by the European Union Aviation Safety Agency (TC No EASA.A.573). It is equipped with a Pipistrel type certified electric engine E-811-268MVLC (TC No. EASA.E.234), developed with partners EMRAX and EMSISO, and Pipistrel’s three-bladed composite fixed pitch propeller P-812-164-F3A. 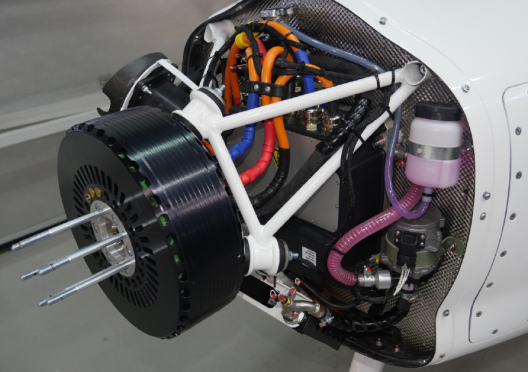 Pipistrel’s E811 type-certified motor in its Velis mount.  Note charging port behind starboard side of motor 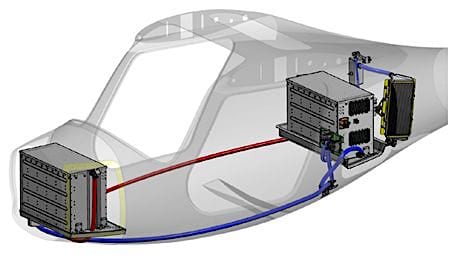 “One battery pack is located in the nose of the airplane and the second behind the cabin. This ensures redundancy of the power source: in case of battery failure, the malfunctioning battery would get automatically disconnected from the system. A single battery is capable of standalone operation and has enough power capability to support climbing and continuation of flight.

“The liquid-cooling system consists of a radiator and two electrically driven pumps installed in series, located behind the rear battery pack. An air inlet for the radiator is located on left side of the fuselage, and the warm air leaves the fuselage at the bottom. Two high power axial fans are installed behind the radiator in order to allow battery cooling during charging. The fans are automatically controlled and monitored by the BMS for seamless operation.

“Batteries can be charged via an onboard charging port using a Pipistrel electric charger. The whole operation is overseen by the Main computer, which displays the status of all systems on the Pipistrel EPSI 570C.” 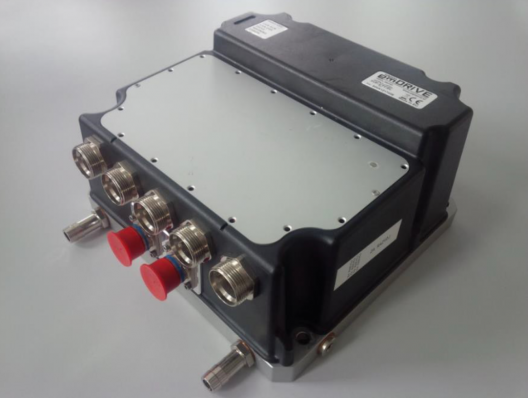 The controller receives torque command via CAN bus and adjusts the motor current input accordingly through the engine’s high voltage AC bus. The motor reacts instantaneously and without hesitation

The upgrades in the Velis ensure that it will have a long service life, operational safety, and the cost benefits of electric aircraft operation.  Pipistrel claims a one euro ($1.13) per hour battery cost.  Beth’s article notes a $4 per hour battery charging expense.   Neither comes close to the costs associated with avgas consumption.

Current pricing for a standard configuration Velis Electro is 159,000 euros (about $179,000).  This is at the top of the range for Light Sport Aircraft, and the price is offset by the low operating and maintenance costs one can expect.

It looks like a winning approach to lowering the cost of flight instruction and bringing more potential pilots into the new world of electric aviation.