Gizmag readers responded pretty much equally with hope and skepticism to today’s story on Cella Energy’s announcement of their hydrogen-based, emissions-free fuel that would power your car for $1.50 a gallon.  One asked if it were April 1 yet.  Others held out more charitable views of the announcement, and perhaps deservedly so. 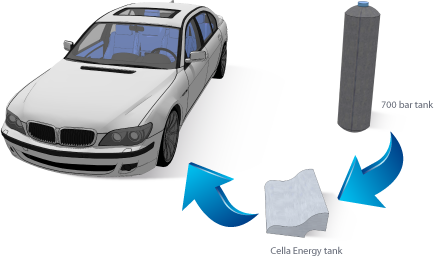 Cella is partially a spinoff of Oxford University’s ISIS programs, named for the Egyptian goddess of magic and life and overflowing with demonstrated successes.  We’ve reported on their Yokeless And Segmented Armature (YASA™) topology motor, a 34-centimeter (13.4 inches) diameter, 7-centimeter (2.76 inches) thick, 11 kilogram (23.2 pound) marvel that can produce a peak 100 kilowatts and 700 Nm (516 foot-pounds) of peak torque.

Cella’s web site claims several important factors that would lead to success, including:

“Hydrogen fuels for vehicle you can pump like regular gasoline at room temperature and pressure, safer to use than gasoline or diesel but with zero carbon emissions.”  Cella may also produce, “Fuel additives that could allow a regular vehicle to meet the Euro 6 emission standards with minimal modifications.”

“Aircraft that can fly with less emissions with jet-fuel, JP8 or kerosene fuel additives, but with minor modifications to jet-engine design,” with “significant reduction in harmful emissions in the upper atmosphere.”

At an overview level, “Cella Energy Ltd makes safe, low-cost hydrogen storage materials. Our materials use nano-structuring to safely encapsulate hydrogen at ambient temperatures and pressures. This sidesteps the requirement for an expensive hydrogen infrastructure.”  Their technology could be used to power laptops, store energy from wind power systems, and provide safer hydrogen storage for space travel.

Working since 2007, Professor Stephen Bennington and Dr. Arthur Lovell at the 1,200 person STFC ISIS facility at the Rutherford Appleton Laboratory and at the London Centre for Microtechnology at University College London UCL developed a white tissue-paper-like storage medium and a similar white powder that can hold hydrogen in a safe state. With work at UCL led by Professor Neal Skipper, Professor Bill David from STFC and Dr. Martin Owen Jones from Oxford University, “provided valuable insights into advanced complex hydride materials.”

Cella’s claims for their hydrogen storage media include one important consideration.  Where does one get the hydrogen?  Many methods for generating hydrogen require expensive catalysts and labor-intensive processes.

“Cella Energy have developed a method using a low-cost process called coaxial electrospinning or electrospraying that can trap a complex chemical hydride inside a nano-porous polymer that speeds up the kinetics of hydrogen desorption, reduces the temperature at which the desorption occurs and filters out many if not all of the damaging chemicals. It also protects the hydrides from oxygen and water, making it possible to handle them in air.

“The coaxial electrospinning process that Cella uses is simple and industrially scalable, it can be used to create micron scale micro-fibres or micro-beads nano-porous polymers filled with the chemical hydride. Cella believes that this technology can produce an inexpensive, compound material that can be handled safely in air, operates at low pressures and temperatures and has sufficiently high hydrogen concentration and rapid desorption kinetics to be useful for transport applications.

“Our current composite material uses ammonia borane NH3BH3 as the hydride and polystyrene as the polymer nano-scaffold. Ammonia borane in its normal state releases 12wt% of hydrogen at temperatures between 110°C and 150°C, but with very slow kinetics. In our materials the accessible hydrogen content is reduced to 6wt% but the temperature of operation is reduced so that it starts releasing hydrogen below 80°C and the kinetics are an order of magnitude faster. Although ideal for our proof-of-concept work and potentially useful for the initial demonstrator projects it is not currently a viable commercial material: it is expensive to make and cannot be easily re-hydrided or chemically recycled.”

Besides working to scale up their technologies, Cella is analyzing the use of other hydrogen source materials that could infuse the gas into their storage media, although most are apparently not as hydrogen-rich as ammonia borane.

Cella is bringing its message to America.  “Professor Stephen Bennington, CSO of Cella Energy, [is]to present ‘A facile nanotechnology approach to improving the performance of complex chemical hydrides’ at the Fuel Cell and Hydrogen Energy Expo at the Gaylord National Hotel and Convention Center, in the greater Washington, DC area, on February 14, 2011.”