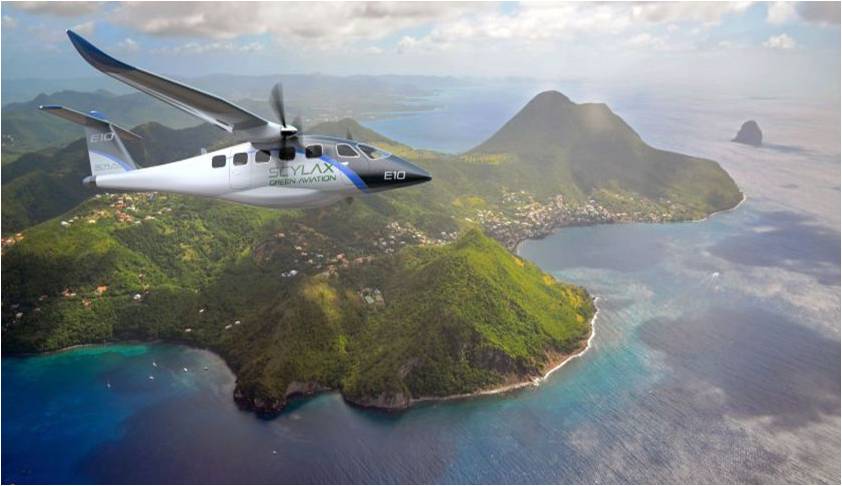 Everything in the world seems to require massive or distributed investment even for simple projects.  Low-budget movies have multiple production companies and different car companies share the same engine or drive train.  Calin Gologan and PC Aero have expanded their offerings over the last decade, and have also expanded their partnerships.  Now, to make his twin-motored commuter liner a reality, he has partnered with a Chinese investor to produce the Scylax E6 and E10 aircraft.

Although the E6 was, “Announced at Friedrichshafen’s Aero Expo and displayed (at least in model form) at the 2013 Paris Air Show, the Elektro E6 is the technology platform for a future, all electric transport aircraft.”  Today’s SCYLAX E6 remains visibly the same as the 2013 version, a full carbon-composite structure with solar cells on the wing and able to carry a payload of 480 kilograms (1,065 pounds).

Funded by EADCO GmbH in cooperation with PC-Aero GmbH, Elecktrosky GmbH promoted the E6 as, “The technology platform for the future commercial e-aviation.”  The team hoped to build a Proof of Concept vehicle in less than three years and achieve CS23 Certification (equivalent to FAR Part 23) in 10 years.

As promised in 2013, “The Elektro E6 will include all systems of a normal commercial aircraft in the final version, including retractable landing gear, anti-ice system, cabin pressure and air conditioning, according to the company plan.”

Now a Chinese private company China Blue Airlines has added a 75 million euro stake in the project.  The deal, formalized in September at the Bavarian Ministry of Economic Affairs, gives China Blue full ownership of the Chinese market for the already-flying E1 and E2 solar-powered machines.  This might mean large-scale production of the single- and two-seat machines, much as Pipistrel’s Chinese manufacturing plan.

The partners should complete feasibility studies in 2020, with certification finished by 2022, leading to production.

Rosario de Luca, managing director of  SCYLAX GmbH (and of EADCO GmbH), and with Calin Gologan, explains, “’We want to start series production in 2024,’ of the E6 and E10, following the setup of manufacturing and testing of the new models.  The E1 and E2 are well established.  German production will continue, but no German firms have expressed interest in the twin-motor craft. 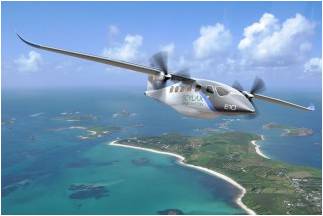 From 2024, the E10 machine is expected to go into mass production.© Scylax

The partners promise big things, indeed.  “With the investment, the company intends to develop the world’s first commercial electric aircraft to series maturity. And together with the Chinese partner, the world’s largest research, development and production center for solar and electric aircraft is to be set up in China.”

The six and ten-passenger craft are expected to cruise at 360 kilometers per hour (223 mph) over their 400 kilometer (248 mile) range.  A sign of their projected good performance, takeoff run is claimed to be 300 meters (984 feet).  This should allow use of small regional airports.

Airliners.doc reports, “In addition, both models are modular. Thus, the machines can be used with little effort and low cost as a cargo or passenger machine. Also conceivable is a special military version. The batteries can be charged within twenty minutes. The price for the E6 version is the manufacturer with around one million euros. The larger version is almost twice as expensive at 1.7 million euros.”

We wish the partnership and the project all the best.  These would be very nice rides indeed.