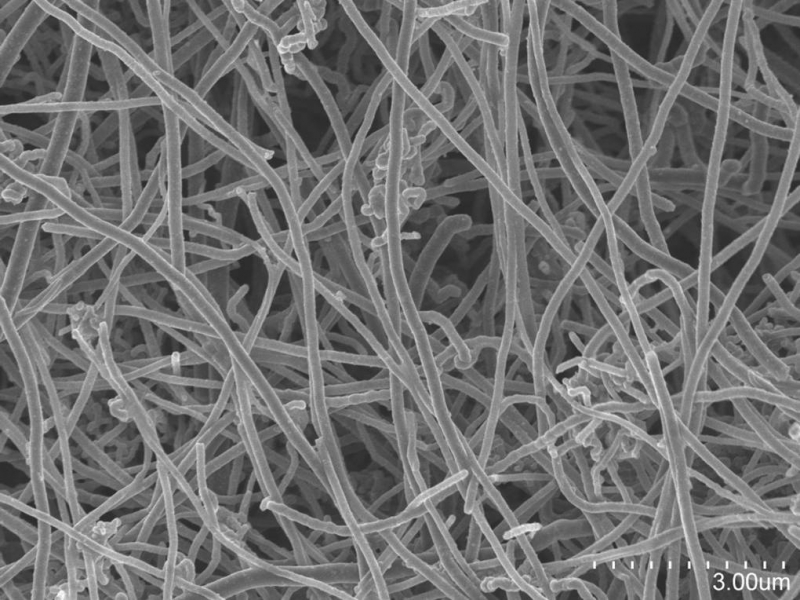 Climate scientists have tracked the growing percentage of carbon dioxide (CO2) in the air, and noted a correlation between that rise and global warming.  Scientists from Michael Mann to Benjamin Santer have measured the changes in CO2 levels against climate change, with 97 out of 100 climate scientists accepting that human activities and rises in CO2 (and other greenhouse gases such as methane) are affecting our overall climate.

Not to start an argument about this matter, this entry looks at a novel method of removing CO2 from the atmosphere and using it to make possible carbon materials that would be used in aerospace and other components.  The question of carbon removal usually includes some method of storing it.  Futurism.com has a great overview (too large to display here) that shows those methods. 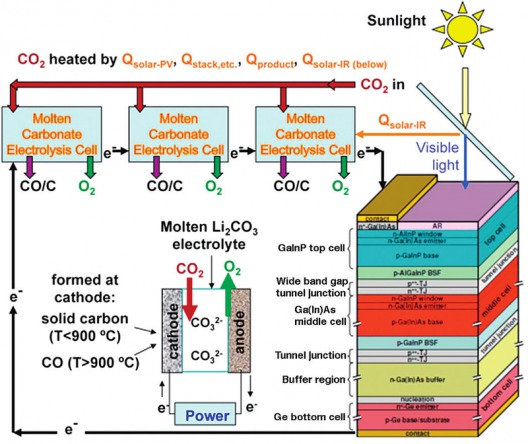 Molten carbonate, heated by sunlight or coming hot from a smokestack, can form solid carbon, a basis for usable fuels

One enterprising group of scientists avoids the costly and difficult means of carbon storage and instead focuses on retrieving carbon and turning it into carbon wool, a usable fiber that could form future fuselages and wings, or bicycle frames and automobile bodywork.  Many researchers, including Dr. Stuart Licht at George Washington University, have attempted to convert atmospheric carbon into fuels. In fact, Licht’s research lab has worked on many possible ways to deal with carbon and turn it into useful products.  We’ve reported on Dr. Licht’s work before. 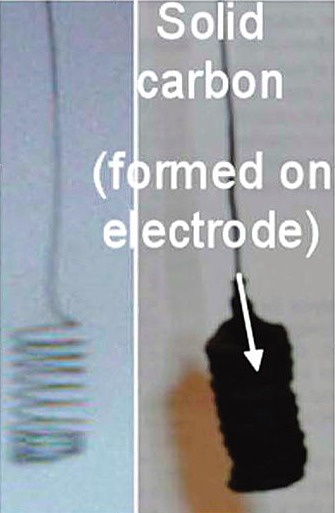 Forming solid carbon on an electrode, one of the steps in the STEP process

One problematic aspect of making fuel from carbon is putting the carbon back into the atmosphere when combustion takes place.  Making carbon-based solid materials is both a way of storing carbon and getting a useful product in the process.

Dr. Licht’s latest efforts use sunlight to power the machinery, and make a kind of carbon nanotube “wool” that can be crafted into carbon fibers.  Part of the charm of the process is using naturally-available forces to clean the skies and make a desirable, high-value product worth $100,000 per ton according to Licht. 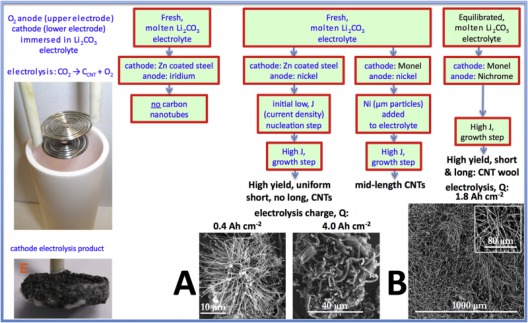 Carbon wool manufacturing is an extension of the STEP process.  Schematic representation of new synergistic pathways to form a high yield of macroscopic length CNT “wool” by electrolysis in molten carbonate. Middle: Prior C2CNT syntheses were dependent on a zinc coated steel cathode, a pure Ni anode, and a low current pre-electrolysis activation step. An intermediate, new C2CNT electrolysis removes the requirement of a zinc coating leading to the exploration of a variety of new cathode substrates. Right side: The optimized C2CNT pathway utilizes Monel cathodes and Nichrome anodes, molten electrolyte equilibration for 24 h, and the electrolysis is conducted directly without pre-electrolysis activation steps. This pathway produces a high yield of macroscopic length CNT wool. Left side: experimental cell configuration used in these C2CNT experiments.  Illustration from the Licht Research Group

Compacting CO2 into carbon nanotubes makes for an efficient means of storing the carbon.  Licht’s team also found that the means of production can be compact.  “The team calculated that an area equal to only 4% of the Sahara Desert would be sufficient to bring atmospheric CO2 concentrations back to pre-industrial levels in ten years, and that a wind speed of 1 km per hour would be sufficient to deliver that CO2 to those STEP (solar thermal electrochemical process (STEP) CNT plants” 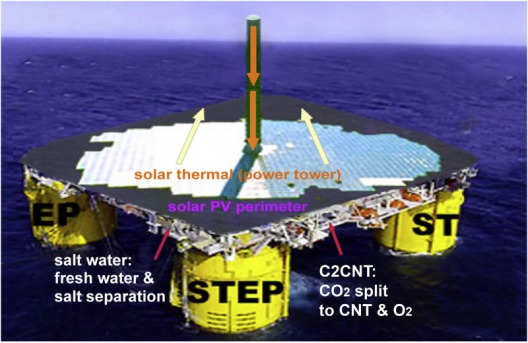 Schematic representation of an ocean-based solar thermal and photovoltaic field to drive both water purification and C2CNT splitting of CO2 to useful products. Johnson et al.

Placed in a salt-water setting, as shown in the illustration, the STEP system would split CO2 into useful products and purify the water.  The multiple outcomes for this process would make it a welcome addition to sunny coastal areas all over the earth.  This promising technology should hearten anyone looking forward to clearer skies and cleaner water – as well as an inexpensive source of high-tech building materials.