Could dipping electrodes in a secret sauce improve supercapacitor and battery endurance and power?  Could coating cell internals be the flavor of the month?  These recipes for better batteries may improve things at a better than normal rate, if California researchers have anything to say about it.

Working with his compatriot Dr. Jaephil Cho in South Korean, Dr. Cui of Stanford University has been a leader in developing improved battery technology, even developing a painted paper battery.  In an appearance at the 2009 Electric Aircraft Symposium, Cui explained a basic truth of battery development – that improvements generally created about eight percent greater power or endurance in cells every year, leading to a doubling of battery capabilities every seven and one-half years.  He aims to improve that rate of change in batteries and ultracapacitors.

Although ultracapacitors are able to charge and discharge rapidly, they are only about one-tenth as energy dense as batteries of equivalent mass.  Cui and colleague Zhenan Bao have attempted to increase the surface area of electrodes by using graphene and carbon nanotubes, which expose a lot of surfaces in their honeycomb-like structures. 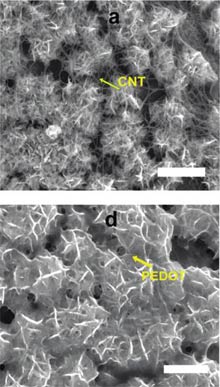 Carbon nanotubes are still a bit pricey, though, leading Cui and Bao to create composite electrodes made of carbon nanotubes and magnesium oxide, an abundant and inexpensive alternative to higher-cost spreads.

As Cui explains in Massachusetts Institute of Technology’s (MIT’s) Technology Review, “’ [Magnesium oxide] also has high theoretical capacity to store ions for supercapacitors.’ However, in the past its use has been hindered by its low conductivity, which makes conveying ions in and out of the material difficult.”

Others, including Lu-Chang Qin of the University of North Carolina at Chapel Hill, think this is “an important advancement,” with hopes for “a new generation of supercapacitors,” but points out that the Stanford researchers have yet to measure the energy density of their new electrodes.

Bor Jang at Nanotek Instruments thinks the “a combination of graphene, MnO2, and a conductive polymer or carbon nanotubes might be overkill,” and still lack the necessary energy density.

Cui’s associate on this research, Dr Bao counters this with the “conductive wrapping method developed by the team greatly improves the supercapacitor performance of graphene/MnO2-based nanostructured electrodes, with specific capacitance increased 20 percent for graphene/magnesium oxide (MnO2) electrodes coated with carbon nanotubes and around 45 percent for the same electrodes coated with conductive polymer.  Researchers achieved values as high as 380 farads per gram, with 95 percent capacitance retention over 3,000 cycles.  She notes that, “This 3D conductive wrapping approach represents an exciting direction for enhancing the device performance of metal oxide-based electrochemical supercapacitors, and can be generalized for designing next-generation high-performance energy storage devices.”

In another approach, Dr. Cui had discussed the flexing that takes place inside batteries as they charge and discharge.  In some cells, this physical expansion and contraction leads to physical and electronic failure.   Gao Liu, a researcher at the Berkeley Lab’s Environmental Energy Technologies Division, has been experimenting with an inexpensive coating that would resist this flexing and prolong battery life.

Liu describes graphite electrodes as acting like a sponge in soaking up lithium ions while holding their shape.  The more ions the electrode can attract, the more powerful the battery can be.   Silicon is highly attractive for this reason, and is able to hold onto 10 times the ions graphite can attract.  But its constant change in volume, up to four times its normal size during charging, eventually creates gaps which do not allow the flow of electrons.

There needs to be a way to contain this flexing.  Dr. Cui has one approach he is working on with Amprius, a commercial enterprise with which he is working.  By “growing shaggy arrays of silicon nanowires that can bend, swell, and move around as lithium enters and exits,” the anodes can survive all the swelling. This approach, though,” requires new processes that aren’t normally used in battery anufacturing,” according to the MIT report.

MIT further explains, “Today’s anodes are made by painting a solvent-based slurry of graphite particles held together with a binder, a simple process that keeps costs low. The Berkeley researchers believe  the key to making new battery materials like silicon work is to stick with this manufacturing process.  That meant coming up with a rubbery binder that would stick to silicon particles, remain highly conductive in the harsh environment of the anode, and stretch and contract as the anode swells and deflates.”

Liu’s research showed that others were making a “fatal mistake” in using coating materials that lost their conductivity when used in conditions that also crippled anodes – not much of a help, really.  Working with materials scientists, Liu found polymers that would enhance conductivity, rather than emulate the failings of the anodes.   Having found the proper material, they made it stickier, and tested it using conventional manufacturing techniques.

Having been tested now through 650 cycles, maintaining a storage capacity of 1,400 amperes per gram (conventional anodes manage 300 Amps per gram) and showing a 30-percent improvement in cell energy in a full battery, Liu thinks he’s on to something.  Dr. Cui does, too.  Since “the storage capacity of these batteries is nearly as good as those made from pure silicon nanowires with no binders,” Dr. Cui thinks “that’s impressive, considering that the binder doesn’t store any lithium.”

Dr. Liu is working with 3M Electronics to find a commercial application for his research.

If such techniques can provide a better recipe for battery success, we may be benefitting from the commercialization of these breakthroughs in a hoped-for near future, rather than peering into that five-to-ten year tunnel that seems to forever constrain progress.

(Thank you to Damon Seeley for alerting your editor to this story.  Thanks also to Thomas Boyle for sending a question that led to an important correction in the second paragraph.)