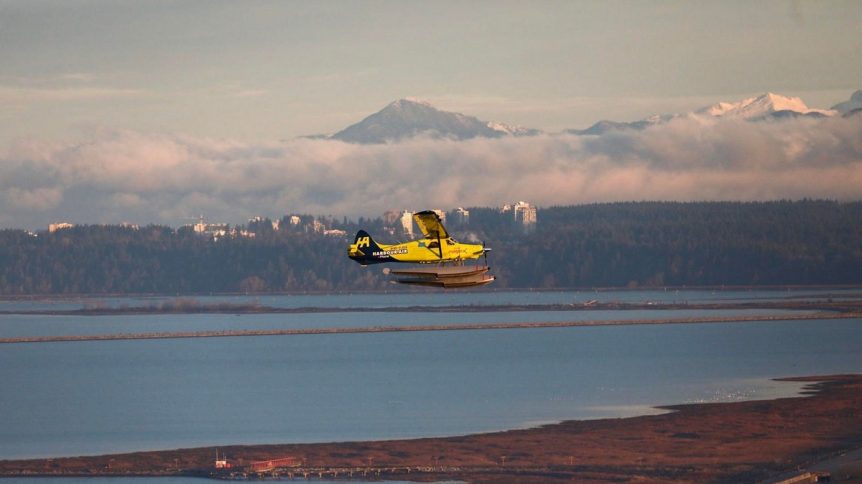 Residents of Vancouver, B. C. were not awakened by the overhead passage of a DeHavilland Beaver Tuesday morning.  The electrically-powered floatplane lifted off at around 8:30 a. m. and zipped by quietly, its Magnix motor humming and only its four-bladed propeller disturbing the air.  The full-flight video below has the airplane “taxiing” for the first four minutes.

Harbour Air took the daring step of publicly test flying an old but spiffily refurbished airplane with a new motor, the paint scheme revealing the location of all major electrical components.  Even more daring, Greg McDougall, founder and CEO of Harbour Air piloted the flight.  Talk about faith in your product.

The Beaver’s original Pratt & Whitney R-985 engine produced 450 horsepower from its 682 pounds – relatively light for its day.  (It was developed in 1929 – two years after Lindbergh’s flight – and put into production in 1930.)  Its dual magnetos were a nod to redundancy.  The Magni500 weighs 297 pounds and produces up to 750 horsepower – relatively heavy for its output in electric motor terms. 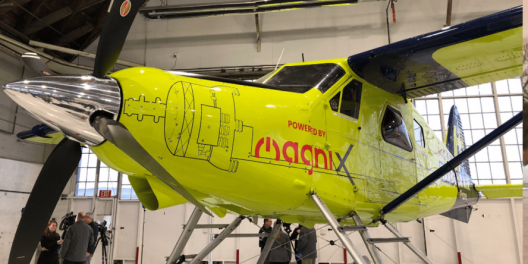 Pouring 20 gallons per hour through the R-985’s carburetor, though, would be the heaviest part of this comparison.  At $2.31 per liter in Vancouver (highest in British Columbia) and with 4.55 liters per imperial gallon, fuel would cost $10.47 per Imperial gallon.  (It takes 3.97 liters per U. S. gallon.  Even averaging $2.00 per liter for flying clubs and self-service providers, a 100LL-fueled Beaver would go through $158.80 for 20 U. S gallons.

According to B. C. Hydro, average charging rates would be 10.29 Canadian cents per kilowatt hour, with 92-percent hydro generated.  Their comparisons with costs and the means of electrical generation in other countries are interesting.

Electrek reported, “[Harbour Air] didn’t confirm the energy capacity of the battery pack installed in the plane, but they did say that it weighs ‘one tonne’ (2,200 lbs). At an energy density of 300 Wh/kg, it would mean a 300 kWh battery pack.  That would mean it costs $30.87 Canadian to charge the pack – a considerable savings over fossil fuels.

Electrek adds, “MagniX CEO Roei Ganzarski told CTV News: ‘The range is not an issue for them. Today’s batteries can provide them exactly the range that they need to operate.’”

Ganzarski further illuminated, “If you look at a five-year lifecycle of operating a traditional gas engine, together with all the significant maintenance that’s required for that kind of engine because they’re so complex, and all of the fuel that’s burned, it is significantly cheaper to convert and operate an electric aircraft.”  Consider that the Pratt & Whitney engine has not been produced since 1953 and that most parts, outside of new old stock items found in dusty parts bins, are provided by after-market manufacturers.

Lower noise will be a great benefit to travelers and residents near Harbor Air’s many landing zones.  Lower operational costs will directly benefit the air line and maybe show up in lower ticket prices – encouraging more travelers.  It’s a way to keep old birds airborne.