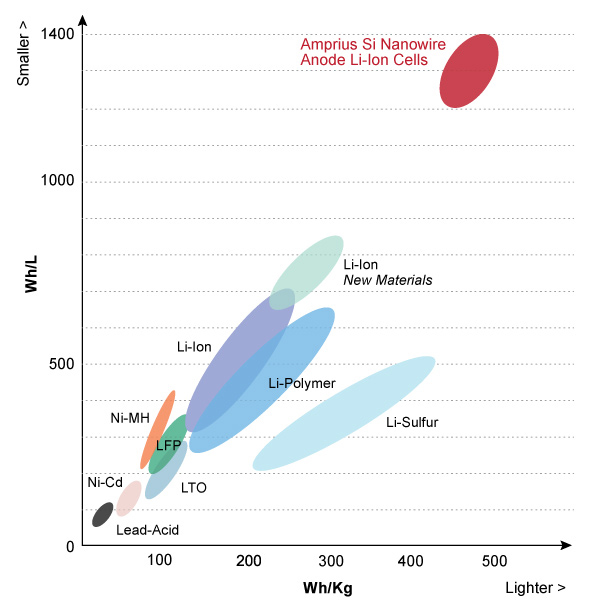 Batteries are a tough study.  We see many different roads being traveled in attempts to reach the Nirvana of the lightest, most powerful energy storage cell ever.  We see continuing shortfalls because of the much chemistries that seem never to work out as hoped.  Several recent articles, though, showed links that forced your editor into a deep study of battery developments first heard about a decade ago.  These involved Yi Cui, Stanford professor and battery guru, silicon electrodes, and a new electrolyte that holds thing together.    Presaging recent developments, your editor first heard Yi Cui present at the 2009 CAFE Foundation Electric Aircraft Symposium.  Then, he predicted, based on the theoretical limits for silicon-based electrodes in batteries, that we would see 10X (greater energy density than then available) batteries in the not-too-distant future.  A decade later, his company Amprius may be edging toward that goal with new funding from Airbus.

Since then, Cui, his students and associates have helped boost the energy density of today’s batteries to about the two-or-three-X level from that of the decade ago.  A significant improvement, it’s still disappointing knowing what the possible gains might be.

Cui and others are doing even more to remedy the seeming lack of progress.

Yi Cui organized a company to make commercial inroads into the battery market, for instance.  Up to now, Amprius has been somewhat quiescent, advertising only for new and essential researchers on its web site.  Now, since a partnership with Airbus and cooperative development o the Airbus Zephyr project, the website pops with images, charts and the answer to the question, “Why Is Battery Technology Evolving So Slowly?”  The answer seems to be “Chemistry.”  While electronics evolve rapidly, “Batteries improve by making advances in chemistry and materials science.”  A somber last sentence explains, “Many of the chemical processes used in modern batteries have reached their limit.” 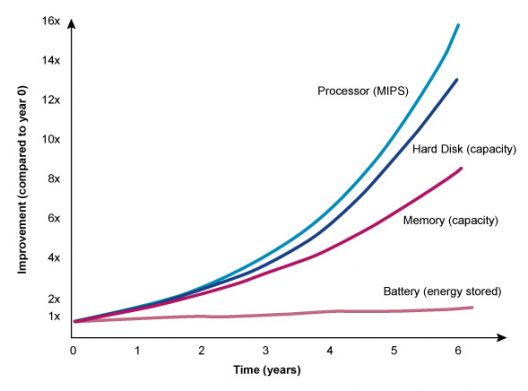 Amprius compares rapid development and improvement of electronic and mechanical devices with the relatively slow growth in energy storage.

Airbus has selected Amprius Inc. of Fremont, CA to power its Zephyr project. Zephyr is a light, unmanned platform which made its first flight in 2014 and operates at stratospheric altitudes and low speeds for several weeks at a time.  This HALE (High Altitude Long Endurance) machine can provide large area surveillance for weather forecasting, fire oversight, and military logistics.

Until two years ago, Sion Power in Utah provided its Licerion lithium-sulfur cells to power Zephyr.  Airbus seems to have switched partners and Sion Power has switched battery composition, now relying on lithium metal for its energy storage.  According to Sion, its cells are no longer flying on Airbus Zephyrs.

Amprius is not yet at the its decade-old goal, but seems to be making progress, noting energy density levels apporoaching 500 Watt-hours per kilogram – more than double most available lithium batteries.  With silicon nanowires at their electrode core, the silicon attempts to swell under charge/discharge cycles, but is constrained by the construction of the wires. This was a problem that kept earlier attempts at silicon batteries from success.

Airbus and the Zephyr

In a joint press release Airbus and Amprius announced a new partnership between the battery maker and Airbus Defense and Space, with promises of financing from Airbus.  The funds will help “drive the development of higher volume production capacity along with higher energy density cells for Airbus Defense and Space aerospace programs, including the Zephyr High Altitude Pseudo Satellite and Urban Air Mobility innovation initiatives.”

Jana Rosenmann, Head of Airbus Unmanned Aerial Systems, explained the benefits to both partners. “This partnership reinforces the link between two market leaders, the newest generation batteries of the market matched with the most advanced HAPS program. Zephyr is currently the only one operating in the stratosphere at an average altitude of 70,000 and running exclusively on solar power, providing persistent local satellite-like services and supporting a wide range of applications and tasks.”

Jon Bornstein, COO of Amprius added, “We are extremely pleased to be working with Airbus and supplying batteries for the Zephyr program.  The incorporation of Amprius’ 100% silicon nanowire anode-based lithium ion batteries into the Zephyr platform represents an important validation of this technology. Likewise, our development of high energy power cells for Urban Air Mobility will enable exciting opportunities in new aviation markets.”