During a visit to the International Vintage Sailplane Meet at Harris Hill, New York, your editor was fortunate to be a guest of Dale and Carmen Kramer, who graciously showed their home, once that of Glenn Curtis, “The Father of Naval Aviation.” 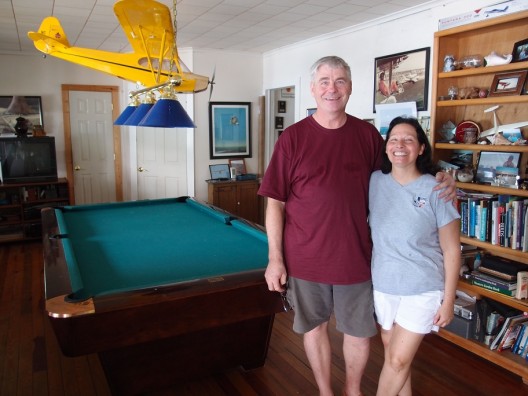 Dale and Carmen Kramer in the front room of their home. The picture on the wall behind them shows Dale flying over NASA's 747 and Space Shuttle at the Paris Air Show

Now the Hammondsport cottage (as in Glenn Hammond Curtis), which overlooks the lake where Curtis flew his early amphibians, is home to a high-tech cottage industry, with Dale creating battery monitoring systems, “brain boxes”, and other elements of his electrical power system for ultralight aircraft.  He designs the schematic and printed circuit boards for the system, sends them off to a PCB manufacturer and hand mounts very small components on the finished circuit boards, a process that would normally use expensive “pick and place” machinery and wave soldering.  His low-tech version of wave soldering takes place in a toaster oven. 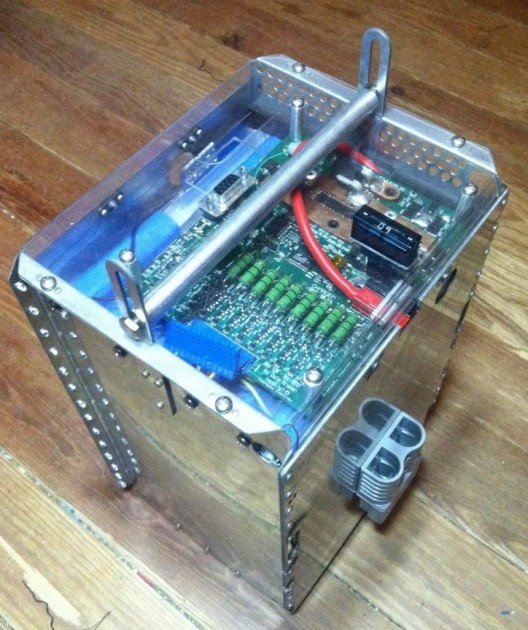 One of four battery packs that will be fitting in wings behind motors. Note BMS board on top and neatly done, Kramer-designed battery box surrounding cells

A table on the covered and shaded front porch overlooks the lake and holds stacks of water-jet cut pieces awaiting assembly into the battery boxes that Dale creates and rotates in the AutoCAD® images on his computer screen.  He also programs the operation of the BMS and other electronics that comprise his complete power system.

He has been working with Joe Ben Bevirt of Joby Motors to improve the motors.  One step removes the bonding agent between the motor’s stator and its external housing; simply shrink fitting the parts together, thus obtaining better heat transfer and cooler running.  The roughly six pound units produce 15 to16 kilowatts, or about 20 to 21.5 horsepower.  Joe Ben is also providing motors with double sets of leads, six per motor instead of the usual three.  This increases power significantly, with two motors in one, and two throttle signals going to each motor.  Power is not doubled, but increased.

Dale is also redesigning the battery packs.  Originally, he fitted a 50-pound pack within the wings behind each motor.  Now two 25-pound packs will replace that single battery pack, each having a BMS and charging circuit, allowing more discrete monitoring of the batteries.  It also allows management of battery health at the individual cell level.  As Dale said, “If you want to take care of your very expensive batteries, you have to do it right.”  He compares batteries to having a pre-paid fuel tank, and you can’t afford leaks.

The video provides Dale’s explanation of the tidy way in which he’s coordinated a great many things into a simple operating system, centralized in his brain board, which provides output to the LED displays that Dale has programmed.

160 Amp Castle controllers modulate the flow of electrons from the batteries to the motors, each managing about 8 kilowatts total energy.  Simple slide potentiometers allow pilot control of that flow in an intuitive manner.  Connections between motors, throttles and displays are through USB plugs, enabling reliable connections and the swapping of components with relative ease.

Dale and Carmen have a good many inventions, projects, and enterprises between them, including a “giraffe” LED lamp that makes a stylish and unobtrusive reading light, and a company that manufactures book boxes to protect priceless volumes from deterioration.  The Hermitage museum in St. Petersburg, Russia was a client following fire and water damage to their rare books collection.  Carmen has programmed a system to cut and fold the acid-free card stock they use for their boxes.

Both Kramers were busy preparing their Lazair for AirVenture 2012, with much yet to be done and a long trek to Oshkosh.  At some point, Dale hopes to market the electric Lazair, and with the multiplicity of improvements he is making to the operation of the craft, buyers will not be disappointed.  At one point, he showed your editor the 1904 wine warehouse in Hammondsport where Lazair parts wait in quantity to be decanted.