The 25 meter (82 foot) span aircraft weighs a mere 457.7 pounds empty, batteries, motor, propeller and solar cells adding another 152 pounds.  At 805 pounds with pilot, its 25 square meters (269.1 square feet) of wing area make it a “floater” in soaring terms, and probably not the “penetrator” that a good cross-country machine needs to be. 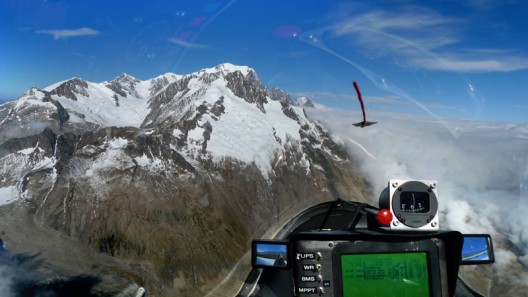 Klaus Ohlmann's view on one of the record flights

This makes Ohlmann’s two records, the latest of 38 total, all the more remarkable.  Declaring his waypoints before each flight, he flew an out-and return flight of 384.4 (238.3 miles) kilometers on August 17, then topped that with a distance flight to three waypoints of 439.3 kilometers (272.4 miles) on September 10, both flights in the Haute Alps of southern France.

Its designers acknowledge the limitations of Icare2’s performance.  “She’s hardly the fastest bird in the skies, but its 25m wingspan and elegant lines make it an impressive sight. Once airborne, level flight is possible without needing to drain the batteries, and even climb is achievable if sufficient lift can be found. 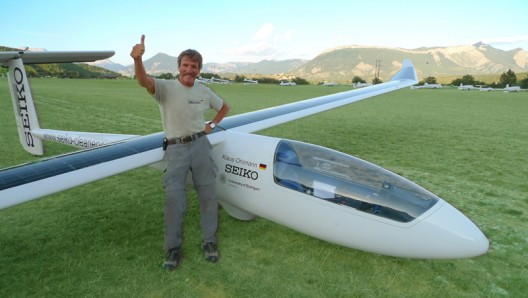 “Icaré 2 can get airborne at around 55mph from an asphalt runway, climbing at around 2m/sec under power. The electric motor is deceptively silent on the outside, its vibrations thrumming through the carbon fibre hull and into the cockpit.” 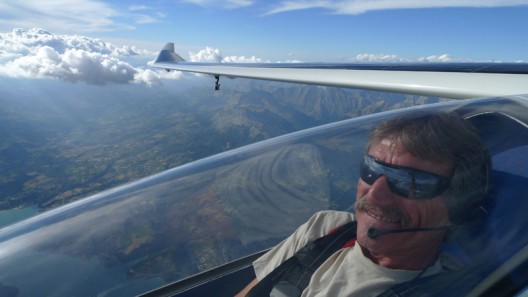 Maximum power yields a 71.6 mile per hour top speed, perilously close to Icare 2’s Vne of 73.8 mph.   With or without power, it is a solar-powered airplane, cruising on its cells or finding lift in thermal energy generated by the sun.  Klaus Ohlmann is a master at exploiting either regime of flight.