Sacramento, California based CR Flight is dedicated to building highly-efficient motor/propeller combinations based on contra-rotation – propellers turning contrary to one another.  Not to be confused with counter-rotation – two propellers driven by two different engines and turning in opposite directions – contra-rotating propellers are driven in tandem by the same engine.  In the case of CR Flight, they are driven by the same electric motor.  Their web site shows a simple animation of the result.  An instructive video provides details about the benefits and drawbacks of the concept.

The firm’s mission statement gives a hint of its character.  “CR Flight™ partners with established industry leaders to design, patent, license, manufacture and provide the industry’s only patented counter-rotating motors to UAV/drone commercial and consumer manufacturers and wholesale distributors.  When you see the CR Flight™ name, know that the CR motor™ is manufactured under tight scrutiny for the highest quality.”

Their web site shows their three current offerings, the V-10, V-20 and V-50.  They have V-100 and V-220 models under development.  Model numbers indicate the pounds of thrust produced by the motor/propeller combination, so the V-50 can lift 50 pounds.  With 100 and 220 pounds thrust units on the way, one can see their use on commuter vehicles, ultralight and even Light Sport Aircraft. 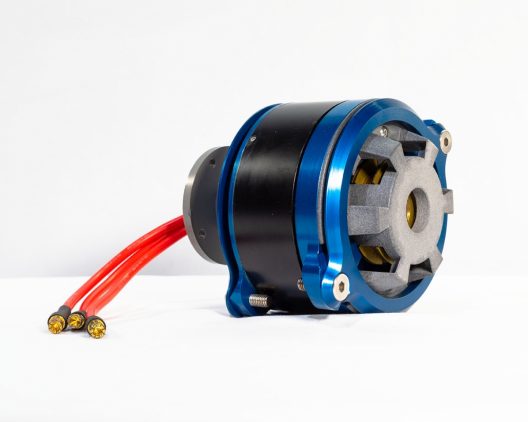 CR Flight V-50 provides a rated 50 pounds of thrust from its two contra-rotating propellers according to the firm.  But it can hit 75 pounds with two 45-inch x 13.6-inch pitch propellers

Comparing its performance with that of a Hacker motor (a well-regarded electric model aircraft motor) shows the 1,035 gram (2.28 pound) motor’s performance not up to that claimed for the V-50.  Hacker’s Q80-8M V2 has a best output of 5.62 kW with a 24-inch diameter, 10-inch pitch propeller.  Although Hacker doesn’t list thrust, it will doubtless be lower considering the single smaller diameter, lower-pitch prop.

Even before your editor’s time, “A contra-rotating propeller was patented by F. W. Lanchester in 1907,” according to Wikipedia.  A variety of craft used such propellers through the years, but World War 2 saw the idea come fully into play.

America used contra-rotating propellers on the Northrop XB-35 flying wing, and Russia developed the Tupolev TU-95 intercontinental bomber with 16-foot propellers.  The BBC reports one drawback from those huge props going supersonic at their tips.  “The Tu-95 is considered to be the noisiest aircraft in current service; it’s even claimed that US submarines can hear the aircraft flying high overhead through their sonar domes while still underwater. Western fighter pilots who shepherded Bears over international airspace have reported being able to hear its turboprops above the sound of their own jet engines.”

Since quiet operation is essential to public acceptance of drones, it will be interesting to see if CR Flight can overcome this problem, especially at their mounts become larger, heavier, and load the propellers more.

CR Flight’s web site includes a white paper on their technology.  The firm credits major differences between a conventional motor and their dual-spinning design.  “In a standard motor, the stator is stationary and propellers are
attached to the rotor. Power is transferred through electrical leads to the stator which in turn causes the rotor to spin. A single set of propellers spin to provide lift.” 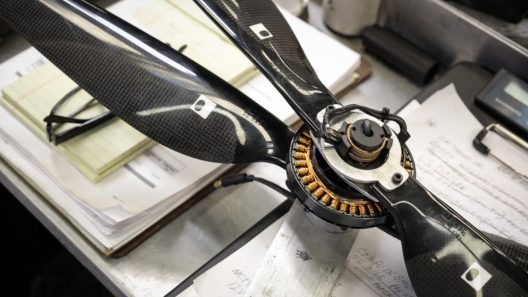 The CR Flight system is a bit counter-intuitive, as well as contra-rotating.  “In the CR Motor, the armature and rotor are free to move independently. Power is delivered through the Rotary Transformer™ to the armature.
The armature sits on a set of bearings, the same as the rotor, allowing both to rotate in opposite directions. When power is transferred to the armature, it applies a force which drives the while the second propeller attached to the
armature is driven in the opposite direction. Both the rotor and armature are anchored to a single shaft, which is fixed to the drone.”

CR Flight claims this approach allows the motors to run much cooler, produce more thrust than conventional motors and last longer.  Their “Made in the USA” status will give them standing in what may become a more patriotic nation, and their apparent quality and time between overhauls will make them favorites with fleet operators.  We will be checking in with them.