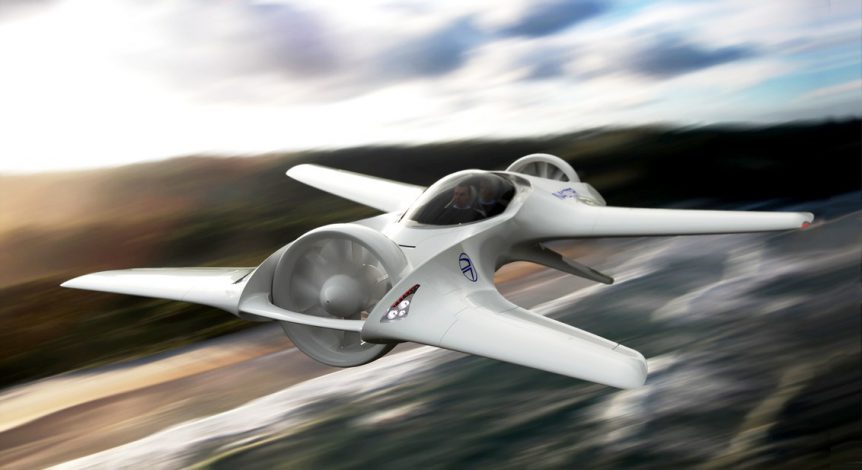 Two companies, DeLorean and Neva, are joining the race to elevate people above the highway rush hour.  They will join over a dozen others, including some incredibly well-financed efforts.  Right now, though, their efforts seem mostly to be computer-generated imagery.

DeLorean, remembered for a starring role in the Back to the Future movie franchise, promised to take Marty McFly places where, as Doc Brown proclaimed, “Roads? Where we’re going we don’t need… roads!”  The DeLorean DR-7 gets teased in a very short Vimeo video

DeLorean’s web site prompts more questions and provides few answers, but eVTOL News, the on-line publication of the Vertical Flight Technical Society, provides patent drawings that illuminate the dark corners.  The text explains, “Paul DeLorean, the CEO and chief designer at DeLorean Aerospace (and nephew of US automotive legend, John DeLorean), filed a patent in 2012. The current DR-7 is a tandem-seat aircraft with ducted fans fore and aft along the aircraft centerline.”

20 feet in length and wingspan, the DR-7’s wings can fold to 7.5 feet (for possible trailering?).  Power studies and simulator data show an expected top speed of 240 mph with a fixed-pitch set of rotors.  A variable-pitch option could allow 300 mph.  Efficient cruise would be in the 150 mph range.  Prices would start at $250,000 for the fixed-pitch version. 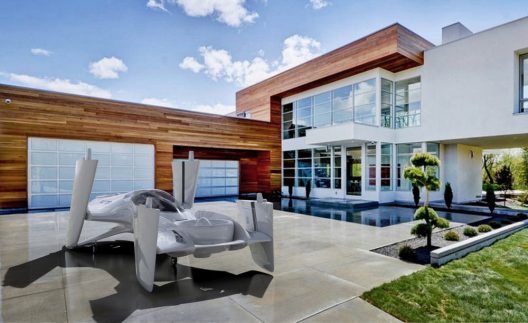 Having rolled out of the garage, DeLorean DR-7 waits for owner to unfold wings and go commuting

It’s intended to be a personal commuter aircraft, combining high speed and an autonomous control system with the ability to lift off in a constrained space.  It’s the DR-7 because of the six variants at various scales tried before reaching the current level.  DeLorean says it’s not a “flying car,” but a VTOL-capable airplane propelled by a push-pull propulsion system.  Both propellers can pivot to allow vertical ascent or descent, with the fuselage suspended between them like a hammock.

eVTOL News explains that the DeLorean “vehicle uses a unique and robust gimbal system to direct thrust in 360 degrees, providing roll and yaw control while hovering, and yaw in forward flight, eliminating the need for a conventional rudder and the associated drag.”  Because vectoring reportedly remains consistent from hover through forward flight, control mixing is not needed.  Apparently the fuselage provides additional lift In airplane mode, aids stall resistance and allows a smaller wing area.  The airplane can be flown as a normal aircraft if there is a power failure.

According to eVTOL News, DeLorean “’…recently finished our proof-of-concept testing and engineering hand-off model (bootstrapped and angel funded) and have just begun to seek funding for the piloted prototype.  We are in discussion now with a few established manufacturers to build this prototype and anticipate its construction within a year.’”

A European consortium, “Neva Aerospace is…based in the United Kingdom. It partners with key clients, technology suppliers, and financial institutions to develop technologies for unmanned air vehicles (UAVs), unmanned air cargo (UAC), aerial robotic platforms (ARP), and electric aviation. It owns a portfolio of patents and technologies which are among the most advanced worldwide. As of January 2016 Neva Consortium counts 5 companies with more than 100 people.”

They show computer images of aerial robots that could be helpful in dangerous situations, perhaps retrieving materials from radioactive environments, for instance.

Interestingly, their video for their projected human-carrying vehicle is merely a series of still renderings with a female narrator explaining its features.

Both robotic and personally-flown versions have several large thrusters and a collection of small thrusters to power and guide them along.  This makes for possibly nuanced control, but a level of complexity greater than that of say, eHang or Vahana.

All their videos seem to be computer-generated except for this one, showing a four-rotor machine being tested first in a large indoor area and then outdoors.

The management team showed up at the Paris Air Show in July and showed their small drones, but did not seem to have a full-scale AirQuadOne on display.

So far, neither of these firms seem to have an actual vehicle on hand.  All their materials are computer images with sometimes very slick production values (and sometimes not).  These are both on your editor’s “wait and see list” until we see some working prototypes.  A friend noted a great many of these video only presentations hope to lure investors.  Wait for the in-flight results before getting too excited or tossing money their way.