At the extremely opposite end of the scale of its big brothers and sisters in the Airbus family, the Green Cri-Cri graced EADS’ (European Aeronautic Defense and Space) display at the second Green Aviation Show  (L’Aviation Verte) held at Le Bourget’s Aviation and Space Museum (Musee’ de l’Aire et de L’Espace) between June 18 and 22, 2010. 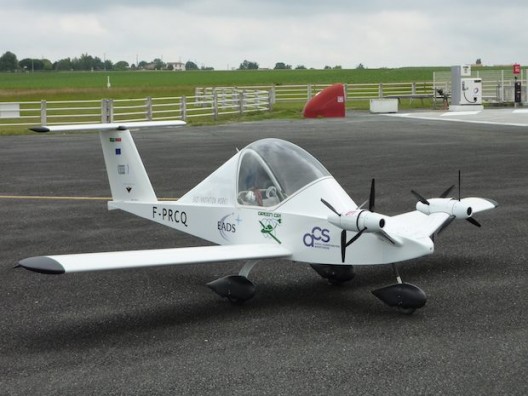 White on the outside, green on the inside

LIke its bigger siblings, the Cri-Cri has four motors, two on each nose pod protruding on stalks like insect antennae from the nose of the miniscule craft and driving counter-rotating propellers.  The two small outrunner motors on each pod appear to spin with the propellers, and are probably concealed inside the spinners.

EADS Innovation Works partnered with Aero Composites Saintonge and the Greencri-cri Association. Lightweight composite construction has replaced the metal and foam structure of Michel Colomban’s original design, which tipped the scales at 138 pounds empty. Originally powered by two chain saw engines, the little plane will probably find the reduced vibration of its electric powerplants less of a strain. One complaint about the original was that metal in the nose section showed stress cracks from the pounding the single-cylinder units imposed.

Its lithium batteries will provide about a half-hour of leisurely crusing at 110 kilometers per hour (68 mph), or 15 minutes of all-out aerobatics. With a climb rate of 5.3 meters per second (about 1020 feet per minute) and a maximum speed of 250 kph (155 mph), the little craft should be a joy to fling about – even for a brief respite from more earthly responsibilities. The Green Cri-Cri should start test flights later this week, and we’ll be doing follow-up reports.