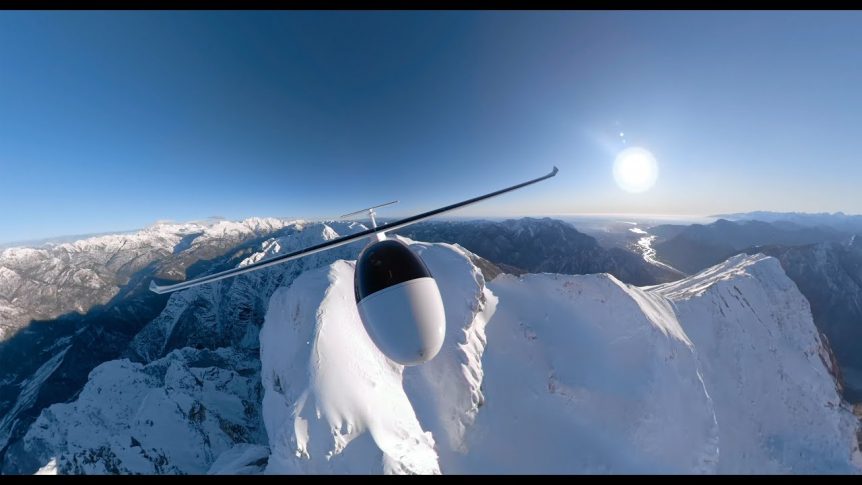 Eric and Irena Raymond took a lovely Sunseeker Duo flight over the Italian alps near their home in Voghera and edited it all into a video.  They designed and built their own solar-powered airplane – Eric’s third.  He flew Sunseeker 1 across the US in 1990 in 21 hops.  A big press conference scheduled for his last landing at Kitty Hawk, NC was a big disappointment since the US invaded Kuwait that day.

Their airplane has solar cells arrayed across the wing and horizontal tail, a small battery pack that gets recharged while flying in the sun, and a 22 kilowatt (30 hp) motor on the tail.  Turning off the motor they can soar on winds wafting up the sides of the mountains.  Beeping and electronic noises come from an audio variometer, a sensitive indicator of whether the airplane is climbing or descending.  All the sounds are ambient.  Note how quiet the airplane is, even under power.

They use GoPro cameras on long selfie sticks mounted on the right wing and nose.  Special software allows Eric to edit out the stick itself, but not its shadow.  Eric and Irena are both professional photographers, BTW.  Their work is featured in GoPro TV commercials.

In a video made earlier this year, Eric shares background on the design of the aircraft, and gives a tour of the cockpit and the many innovations therein.

Eric’s comments for this final YouTube video might help orient the viewer  It might be a real treat on virtual reality (VR) goggles.  “After soaring over the Alps for 2.5 hours, this is a final pass over the ridge before heading home to get warmed up.  Filmed on December 13, 2020, north of Udine, Italy in the Julian pre-Alps. Best viewed on a tablet or mobile phone that can be moved around to see the views.”  This works beautifully even on a conventional computer monitor.

Just like your rear-view mirror, objects may be closer than they appear.  Pivot the view around to a rearward perspective to see how closely the Duo shadows the ridge as it descends.