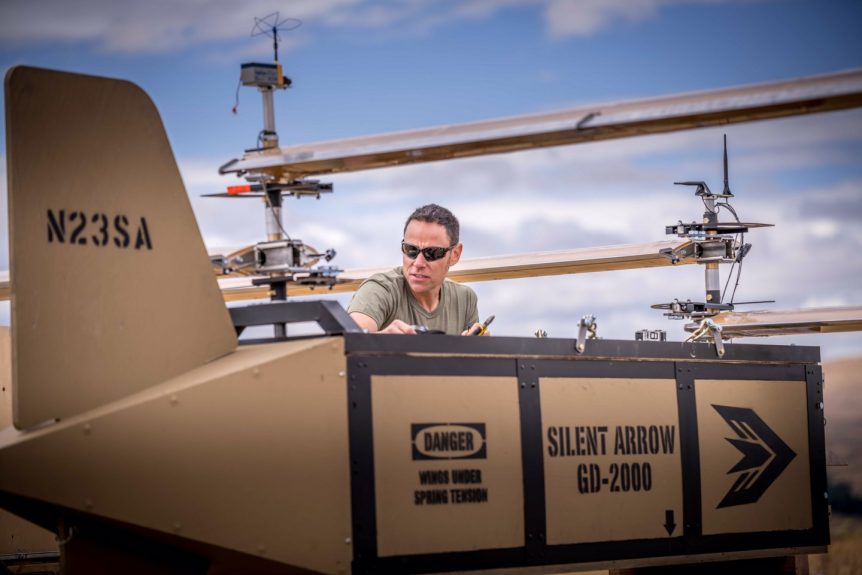 Chip Yates used the same UQM motor on his record-breaking Pikes Peak and Bonneville Salt Flats motorcycle and his modified Long-Eze aircraft (Long-ESA for Electric Speed and Altitude).  He planned an ekectric trans-Atlantic flight using an audacious concept for mid-air recharging.  A bit quiet for the last several years, Chip has come up with a boxy glider, a load carrier that will, at some point, use the same kind of UQM motor with which he set so many records.

Capable of hauling 907 kilograms (2,000 pounds) to front-line troops, or emergency supplies to otherwise inaccessible disaster zones, the GD-2000 Silent Arrow allows delivery of heavy cargo from a range of aircraft and helicopters.

Yates Electrospace lists the following specifications for the GD-2000.

Displayed at the Defense & Security Equipment International (DSEI) show in London, the Silent Arrow already has contractual commitments for 3,020 aircraft. 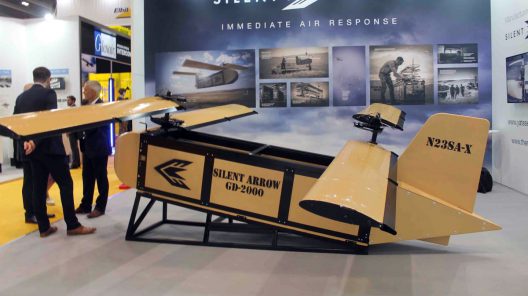 On display in London, the GD-2000 has found customers in 34 nations

Yates Aerospace describes its high-volume delivery vehicle as, “…Essentially a 2.43m (8ft)-long rectangular box with two-sets of attachable wings, a nose cone and tail assembly. The wings, nose cone and tail can be packed inside the aircraft’s fuselage for shipping. The UAV has a cargo volume of .75cb m (26cb ft).”

The video shows Silent Arrow GD-1000, an earlier version of the company’s glider product, prepared for a helicopter drop and then successfully deployed.

It’s a versatile box, capable of being air-dropped from a Boeing C-17, Lockheed Martin C-130, Sikorsky CH-53, Bell Boeing V-22, or from side-door aircraft or from below a helicopter using a sling.

Yates Electrospace is not authorized to disclose the foreign military launch customer’s identity, but can disclose other orders from are US Air Force Special Operations Command and US Army 160th Special Operations Aviation Regiment. The US Marine Corps (USMC) in 2017 also awarded the company a demonstration contract for a smaller, 454kg (1,000lb) gross weight, glider UAV. 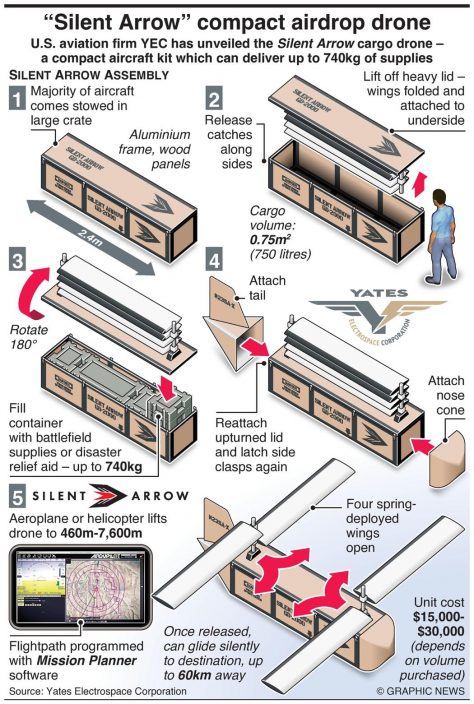 Chip Yates, Chief Executive Officer of his firm, explains that even though he and his company are located in southern California, the “Glider Disposable 2000lb. Gross” is built in the United Kingdom by the MEL Group.  “The MEL Group proved to be the best from a pool of possible contract manufacturers, including US-based companies.  They are handling AS9100, UK MoD, DAOS, etc., and are amazing partners.”

Yates Electrospace has found a great niche market in 34 countries and, “…Plans to expand its product line to include single-use, reusable, scaled-down, scaled-up, unpowered gliders and electrically powered cargo UAVs. And, in addition to military customers, the company is targeting the humanitarian and disaster relief markets. Yates Electrospace is competing against Airborne Systems’ Joint Precision Airdrop System, a GPS-guided cargo parachute that the USMC has ordered.”

Testing has been ongoing since 2017 at Oregon’s Pendleton Unpiloted Aerial System (UAS) Test Range.  In future, longer deployment distances made possible with a UQM 135 kilowatt motor will make launches even safer for aircrews, who will be well out of the range of enemy fire.  That’s essentially the same motor Chip used on record motorcycle and aircraft runs, and may be the basis for record sales of the boxy delivery craft.