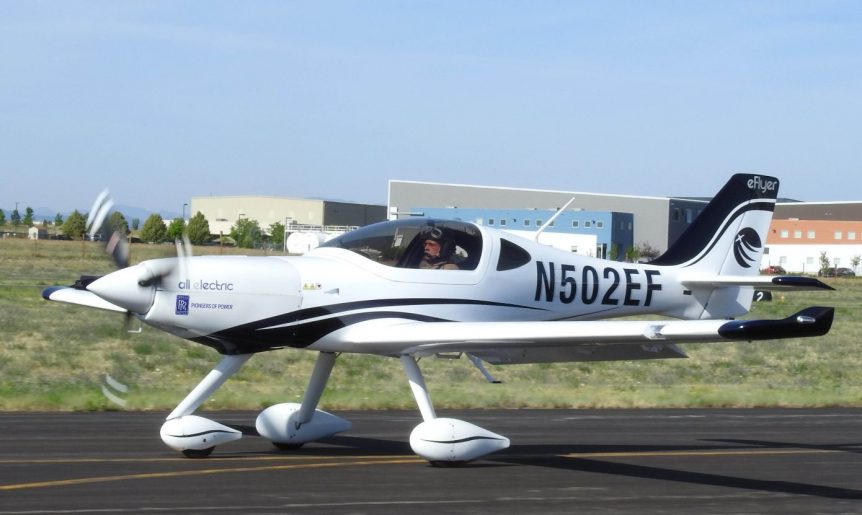 Bye Aerospace has been making inroads into both battery development and flight training with partners on an international scale.

As reported in July, Bye Aerospace and OXIS Energy announced a collaborative program to achieve a 50-to 100-percent increase in flight time from a single charge compared to existing batteries.  On its web site, OXIS reveals that it is, “…developing a <30 kWh battery system integrated with an Aviation Battery Management System for a two-seater electric passenger aircraft.”  The partnership, “…seeks to achieve a 50% to 100% increase in flight time from a single charge on future Bye Aerospace eAircraft,” with cells exceeding 500 Watt-hours per kilogram at 20 Amp-hour capacity.  This will lead to weight reduction and increased flight duration.

Quantum Air is a short-range carrier with a mission.  “Our mission is simple and prevalent throughout our brands.  To change the way people travel through cutting-edge aeronautics, made available to the general public in a cleaner, safer, and more exhilarating way than ever before. We invite a future where on-demand air travel is as ubiquitous as car service, a future where our aircrafts consume half the fuel but generate twice the excitement, a future where you don’t have to go through 2+ hours of travel, check-in, and security for a 45-minute flight.

Quantum relies on OSM Aviation, a 6,000 person operation that has trained pilots since 1963, to provide training for its pilots.  Both will use eFlyer all-electric aircraft, and have ordered a total of “160 zero-emission aircraft with significantly lower noise pollution and enhanced altitude performance” to be delivered by the end of 2021.

OSM will train future pilots who will fly the Bye eFlyer 4 for Quantum Air.  Like the eFlyer 2, it will have Rolls-Royce power

Tony Thompson, founder and CEO of Quantum, sees the benefits of this approach. “Quantum’s partnership with OSM means that Quantum pilots will fly commercially in essentially the same aircraft in which they trained.  Quantum commercial pilots will be intimately familiar with their aircraft, setting a new standard for safety.”

Espen Høiby, CEO of OSM Aviation Group, adds, “Air travel is instrumental in bringing people together both regionally and internationally. Since humans will always have the urge to explore this world, we need to find sustainable solutions to meet that need.  Therefore, OSM Aviation is excited to join forces with Quantum Air to shape a greener and safer aviation industry in the years to come.”  OSM operates training operations in Norway, Sweden and the United States of America.

Scott Akina, Quantum’s Vice President and Chief Pilot, agrees, explaining, “I expect to receive pilots from OSM who will already know Quantum’s aircraft systems inside and out, and this will be no small part of the reason why Quantum will run the safest operation in the airline industry.”

George Bye, CEO of Bye Aerospace, said he is impressed with the collaborative partnership between OSM and Quantum. “Electric aviation, including our eFlyer family of electric aircraft, is the springboard for a movement that we believe will breathe new life into the aviation industry,” he said. “That includes implementing creative ways to improve effective, economic access to pilot training. The OSM-Quantum model, which focuses foremost on new professional pilot training safety, aligns perfectly with Bye Aerospace’s principles.”

Contending for the honor with Harbour Air in Canada, Quantum Air strives to become the world’s first all-electric airline, “disrupting the regional air travel sector with an environmentally friendly and lucrative alternative for travelers.”

Their web site suggests they will offer intra-city, inter-city and even sub-orbital options to their clients.  They are positioning themselves to be environmentally friendly in all realms, with craft such as the Surefly (below) and the Bye range of two- and four-seat eFlyers.

George Bye has positioned his company to be a leader in training and cross-country electric aircraft.  If his partnership with OXIS can bring about the 2X batteries and greater safety promised by its design, electric trainers and passenger-carrying light aircraft could be competitive with their fossil-fueled cousins.  With the training and operational partners now formulating their plans, we look forward to their making aviation more sustainable, affordable, and accessible.

Thank you’s to Diane Simard of Bye Aerospace and Beth Stanton of the EAA for calling these developments to your editor’s attention.