Consider that Nobel Peace Prize winner Dr. Benjamin Santer of the Intergovernmental Panel on Climate Change (IPCC) kicked off the first day of the 2011 Electric Aircraft Symposium with a highly-detailed examination of the issues surrounding climate change.  That required an equally adept presenter to expound on possible solutions for worldwide problems, and EAS 5 delivered with Dennis Bushnell, NASA’s Chief Scientist at Langley Research Center.

According to one biography, he is “responsible for Technical Oversight and Advanced Program formulation for a major NASA Research Center with technical emphasis in the areas of Atmospheric Sciences and Structures, Computational Sciences and Systems Optimization for Aeronautics, Spacecraft, Exploration and Space Access. He has 43 years’ experience working in the leading edge of science.”

Bushnell sees the ongoing IT revolution as affecting every part of our society, with outcomes such as distance learning and home-based work through telecommuting.  We see additional effects with shopping on line, entertainment at home (Netflix for instance), and the rise of IT socialization (Facebook).  This physical apartness coupled with interactive social groups may lead to changes in our transport and its purposes.

Quoting Arthur C. Clark, “The roads to support autos cost as much as a small war and the casualties are on the same scale”, Bushnell looked at the 80-year dream of flying automobiles, and posited adaptations and alternatives such as robotic package delivery, 300 mile commutes, and flying shuttles for “the aged, the infirm, the young, and the inebriated.”  Such personal air vehicle use, along with rail traffic, could constitute “a complete [physical] domestic transportation system,” according to Bushnell. 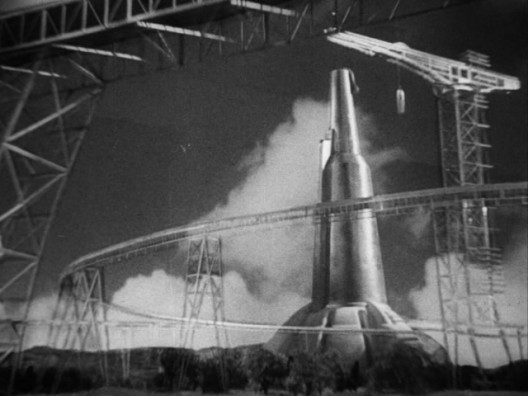 Not so happy future from 1936 film "Things to Come"

This approach would have enormous infrastructure and sociological implications, reducing the need for roads and bridges, built-up core cities, and allowing self-sufficiency in electronic cottages on their own large plots of land.  Obviously, from this writer’s perspective, this would require a big change from the current 99-percent/one-percent economic dichotomy, because such alterations would require a
greater prosperity for everyone, or a more layered society much like those in utopian fiction (or dystopian, as some might fear).

This will come about because navigation and control breakthroughs currently are being developed by the Department of Defense and package delivery companies; and ultralight, motorcycle-like flying machines will enable most to have a safe means of traversing space while avoiding downtowns and malls.  These small machines would expand in size to include “Cadillac” level transportation and service delivery.

Bushnell thinks this is possible because the hardware and software Infrastructure involved would be “vastly less expensive than the current ground alternative.”  He also foresees a demand for this based on “the HUGE markets [and] economic benefits,” and “because the People want the associated freedom/convenience/time savings/cost reductions” that could come from this visionary breakthrough.

Of course, these PAVEs will require energy to exploit this new freedom.  Bushnell sees four major ways of fueling this future: biofuels, exotic energetics, beamed energy, and electricity – using either stored or beamed energy.  The long electrical cord that is the subject of many wags’ jokes about electric flight, in his view, still exists with the weight and cost optimization of the stored or beamed energy.

He favors electrical energy for flight because of the lack of emissions, efficiency, cost, safety, freedom from maintenance, the flexibility allowed by electric motors and the lack of noise – prime considerations even today.  Reducing fuel use and cutting emissions, including high altitude vapor trails – even from fuel cells, will be a major cost factor in future flight.

Making the electricity will be a challenge in the future, with peak oil having occurred in 2008, peak cheap uranium coming in 2025, cheap natural gas in 2030, and cheap coal mid-century.  Energy use will grow even while cheap energy diminishes, making for a necessarily inventive future.

He has big hopes for biofuels, including halophytes, cyano-bacteria, and algae.  The use of waste and salt water in wastelands and deserts can solve the CO2 problem without reverting to electric alternative, will have massive capacity, and sequester CO2.  Sea water constitutes 97 percent of all water on the planet, and is not likely to run out, has 80 percent of the nutrients needed for agriculture (needing only phosphorus, nitrogen and iron to complete its ability to feed plants).  Such use also protects the clean water necessary to human life.

He listed a promising number of ways to harvest energy, including wind, solar, wave power, geothermal, and biomass, but took them to the next level with suggestions for the extraction of atmospheric CO2,
and using engineered microbes to convert the gas to fuel; low energy nuclear reactions (LENR and sometimes erroneously referred to as “cold fusion”); exploitation of energy potential in chemical bonds; and the use of positrons – the “affordable anti-matter.”

This breadth of technological options, applied to advanced aerodynamics and new materials development, could lead to highly synergistic and extremely powerful aircraft capable of fulfilling as yet undreamed-of missions.  Bushnell can envision future aircraft with 40:1 lift-to-drag ratios, burning 70 percent less fuel than our best modern examples, with greater propulsion efficiency and less weight, capable of 250-foot takeoff runs and producing no emissions.  This is all part of his “responsibly imaginable” scenario.

Dennis Bushnell’s breadth of knowledge and his ability to show possible links and combinations of technologies drew an enthusiastic standing ovation from the attendees.  Such presentations have a high degree of optimism and enough realistic assessment of costs and potential to give us all hope for a better, more intelligent energy future.

In this video, Bushnell summarizes many of the points he made at EAS 5.  YouTube also offers interviews that Tim Seeley conducted with Bushnell at the Symposium.