Imagine being able to walk one morning from your front door to a nearby small airport, step into an electrically-powered small airplane, point to a destination on an illuminated map on the airplane’s display screen, and be whisked to your destination so quietly that your passage overhead will not wake your neighbors.  This is part of the dream that Dr. Brien Seeley, founder and President of the CAFE Foundation, presented to an appreciable and appreciative crowd on Friday, August 2 at the Rotax Pavilion during the Experimental Aircraft Association’s AirVenture 2013. 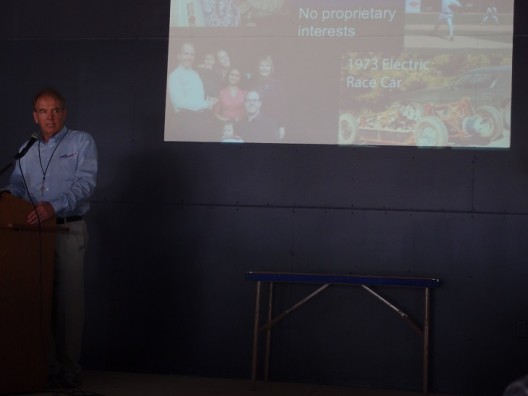 Dr. Seeley presenting his vision of how CAFE and EAA could create an aeronautical renaissance

His talk, “The CAFE Foundation’s Green Flight Challenge Program: Toward a New Transportation Mode,” was a roadmap to how the CAFE Foundation, NASA and corporate sponsors will present five new challenges leading to the type of electric short or vertical-takeoff and landing airplane that will enable neighborhood pocket airports.  He also challenged EAA members to become involved, using their technical knowledge and talents to further the development of quiet, high-performance two seaters that would fly from the distributed network of “pocket” airports, most no bigger than an NFL football stadium.

During his talk, Dr. Seeley noted his recent meetings with the Office of Science and Technology Policy, which explains its threefold mission as, “First, to provide the President and his senior staff with accurate, relevant, and timely scientific and technical advice on all matters of consequence; second, to ensure that the policies of the Executive Branch are informed by sound science; and third, to ensure that the scientific and technical work of the Executive Branch is properly coordinated so as to provide the greatest benefit to society.”

After he presented the Green Flight Challenge to John Holdren at the President’s Council of Advisors on Science and Technology (PCAST), NASA invited Dr. Seeley to speak at their 2010 Aviation Unleashed conference, which focused on passenger-carrying, auto-piloted vehicles.

Much of what makes Dr. Seeley’s vision relevant comes from the alleviation of the traffic nightmare many of us face daily, with 43-percent waste time spent in stop-and-go traffic a shameful national average.

Since aviation’s fundamental purpose is to provide fast travel without roads, a Sky Taxi, as envisioned by Dr. Seeley, doesn’t have to be supersonic, merely faster than the alternatives.  A typical driving trip includes sitting for countless minutes in clusters of frustration, while a typical airline trip includes that drive to the airport, being frisked by TSA agents (who lost your editor’s keys on his trip to Oshkosh – necessitating his kids driving to the airport with a spare set when he returned home), and facing an Alice-in-Wonderland mirror-image car, taxi, or shuttle trip at the other end to reach a final destination.

These sky taxis would be four times faster than cars and two times faster than a LearJet on a point-to-point basis.  Without pushing the boundaries of easily achievable performance with current technology, you could travel at 120 mph on your very own road to anywhere – “your very own wormhole through the sky,” according to Dr. Seeley.  He sees such craft as a “bizjet for the masses” with no need for the TSA.  These will be two-seat aircraft which will let you off at or within walking distance of your destination – much more convenient than the hours-long battle to get into or out of large airports. 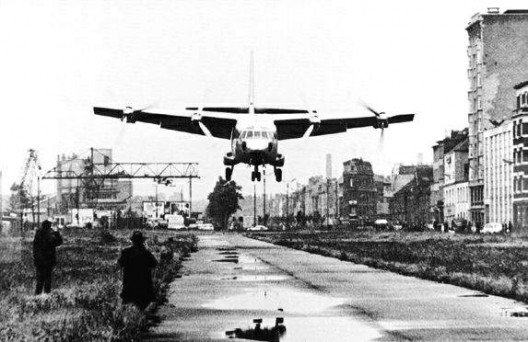 A prototype pocket airport 60 years ago with a Breguet 941 demonstrating a very short landing. This was a four-turboprop, 57 seat airliner, so imagine how easy this would be with a two-seat, electric commuter plane

The EAA would be a “crucible for development” of the technologies to create these astounding new machines – not science fiction or even Popular Science – but achievable with today’s technology.  Dr. Seeley showed a slide of a Breguet 941, a French military/civilian craft that first flew in 1958.  With an all-up weight of 48,500 pounds, it could levitate 57 civilian passengers into the air with only a 607 foot ground run.

The CAFE board is an all-volunteer group with 32 years of technical testing experience that helped create a small aircraft renaissance. For the last 11 years, CAFE has hosted the Personal Aircraft Design Academy (PADA) at AirVenture, which grew from the Laminar Flow True Believers Society that met at the Oshkosh Airshow every summer.

CAFE created the first-ever Electric Aircraft Symposium (CEAS) in 2007 to harness the untapped national resource of aircraft innovators, with Paul MacCready as its keynote speaker.  In the last seven years, the now annual CEAS has expanded on the myriad technologies available that will make future flight safer, greener, and more convenient.

In 2005 NASA chose CAFE to run several of its Centennial Challenges, which included flights that demonstrated not only fuel economy, but quiet and safe operation.

The early efforts culminated in the 2011 Green Flight Challenge, “The Dawn of Electric Flight.”  That event, with competitors orbiting Sonoma County near Santa Rosa’s airport, exceeded the basic hope for the competition. Thanks to sponsorship by Google, CAFE was able to create the first-ever Electric Aircraft Charging Station (EACS) at the CAFE Flight Test Center.

Using currently available batteries to power a 145-kilowatt motor, the winning Pipistrel flew with 200 Watt-hour per kilogram batteries, nothing extraordinary at the time or now.  The $1.65 million expended on the Challenge netted 20 STEM dissertations, and was one of the most successful of the NASA Challenges, with one of the smallest expenditures making for the biggest achievements.

Essentially, a Challenge is crowd sourced, with tailored performance results, and gives an extreme leveraging of funds.  The Internet provides for rapid recruiting of teams, who usually show a high competitive spirit and a passionate dedication to the cause.  Challenges provide a global stage for publicizing their aims and goals, and get motivated teams to deliver rapid results on time and on budget.

We’ll look at the five-stage series of Challenges that CAFE is now developing with NASA to make future aviation a more exciting place to be.

Many of the points in Dr. Seeley’s presentation can be found in the White Paper “Faster and Greener – Pocket Airports,” which shows the advantages of the complete transportation plan and the types of technology required to achieve such results.  A talk he gave earlier in the morning at the Innovation Pavilion demonstrated that most of the necessary technologies are currently available.