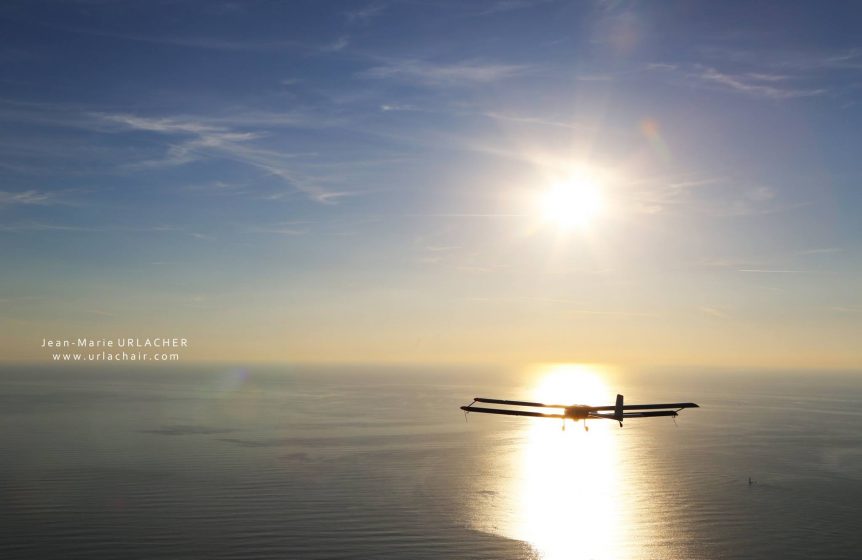 Eraole is a unique machine in a sea of unique craft.  Powered by a combination of sunlight, Total biofuel, and hydrogen, Raphael Dinelli’s tandem-winged biplane has been under development for many years.  With it, Raphael hopes to cross the Atlantic in 2019, Duplicating Charles Lindbergh’s 1927 flight at about half the Spirit of the Spirit of St. Louis’s speed.

Eraole’s first flight took place in 2016.  The video will allow you to compare its look then with its changed appearance today.

Dinelli’s original plan for the flight included the use of an algae-derived fuel to run Eraole’s engine/generator.  As reported by La Tribune, though, “For four years, the Ocean Vital Foundation conducted research with the Fermentalg research laboratory in Libourne to produce a fuel based on micro-algae.

“’Despite the additives that could be added, the oil froze at altitude and became impossible to use,’ says Raphael Dinelli, who had to bring himself to fill up at … Total.”

The Biojet fuel will provide about 70 percent of the energy necessary for flight, with solar cells adding 25-percent.  The remaining five percent will come from a hydrolysis process  that will produce hydrogen to help power the motor.

“We are now using Biojet oil, produced by the manufacturer from recycled sugarcane waste. To this, we add a hydrogen doping, obtained by separating hydrogen molecules contained in the vegetable oil and in water. For now, we do not store in a fuel cell, it may come…

During the last two years, Dinelli added struts between the lower front wing and the upper rear wing, possibly to stiffen the two light, independent structures.

Testing for the Big Challenge

On September 8, Dinelli flew eight hours and reached 7,040 feet. He reported, “At this height, I was able to cross airliners.  It was pretty impressive!” Flying where airliners crossed his path and setting personal best records that day gave him the necessary encouragement to tackle the Latécoère Raid, a voyage down the edges of France, Spain, and Northern African countries to Dakar, Senegal.  The route honored the early Aeropostale aviators such as Pierre-Georges Latécoère,  Jean Mermoz and Antoine de Saint-Exupéry. 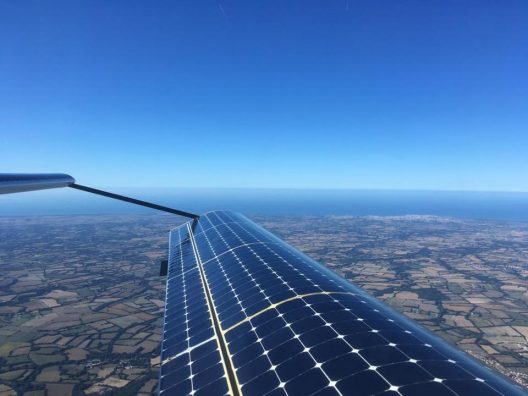 While still in France with his airplane, Dinelli had a wonderful experience.  “A huge surprise tonight after an extraordinary performance of the France Vertical Perpignan Patrol. The Pilots of the bam came to see and listen to the operation of Eraole. They gave me all their support and encouragement. I am extremely proud to receive so many compliments of the excellence of the French Pilotage, what a happiness. I will dream all night of a future electric flight patrol – go.  be crazy ? eraolelement your Raphael”  (It might benefit from a better translation than computers can givc.) 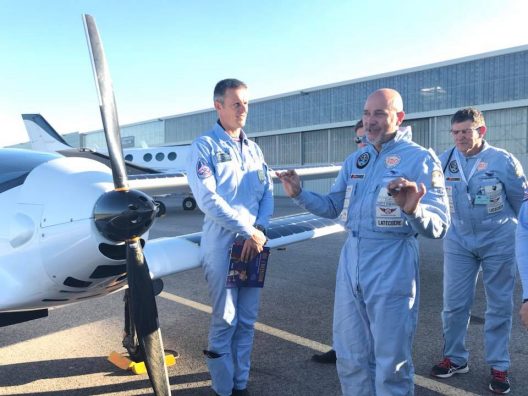 Jean-Marie Urlacher, a highly-skilled aviation photographer, praised Dinelli’s project – and Dinelli.  “A modern day adventurer is clearing a new era of aviation. At the controls of his project Eraole, Raphaël Dinelli former navigator of the Vendée Globe (a racing sailboat), inventor, engineer and now official test pilot of its prototype, flies without any polluting emissions.  A complex challenge that he meets with a tiny team of great talents.  They were few to believe, they are more and more to follow him.  A unique project in the world to support: Challenge Eraole.”

Dinelli’s friend Abel Sevellec wrote this poetic homage to Dinelli, appropriate for their mutual love of the French aviation pioneer and writer Antoine de Saint-Exupéry following their voyage down the west African coast.

“It is this marvelous encounter that I have made in these landscapes of sand and sky where wild regions of the soul and the colors of time lend themselves to confidences. They reveal to us the invisible bonds that bind us to the planet and the greatness of man. This is how Raphael, in the footsteps of Charles Lindbergh, [will] attempt in 2019 the crossing of the North Atlantic with his electric-hybrid aircraft Eraole.  Always further, always more innovative, it will come into play, in a total commitment, to take a decisive step towards the future. Towards a clean planet.

“But to accomplish his mission Raphael needs, as with each challenge, a favorable wind as a sign of destiny to get his project off the ground and to overcome all the difficulties.  It’s impressive to hear him talk about all the parameters to master to achieve this.  We wish him this state of grace to crown his efforts and this astonishing passion that devours him and transports him.  This something that drives him to succeed [is] still the impossible because the man never gives up to follow the star which illuminates his way.”