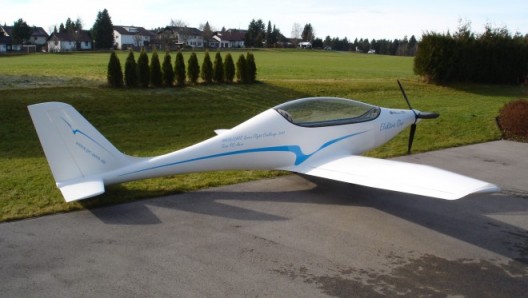 Elektra One shows off new gear at rollout

On November 22, 2010, PC-Aero rolled out Elektra One with a running motor, the Geiger HP-13.5 unit normally found on paramotors, trikes, and the Swift flown by Manfred Ruhmer.  Testing and the public unveiling took place at the Rotortec Company in Gonsried, Germany.  The airplane had shed the tricycle gear  it displayed at the Friedrichshafen Expo for Sustainable Mobility, where it had been a centerpiece in June, 2010.  It now sports what looks like a center-line retractable gear much like that of the Fournier motor gliders.

A month later, December 22, the team “performed successfully the static tests of Elektra One for the German Ultralight Certification. The structure of the aircraft (wing, fuselage and tails) [were] loaded up to limit load.”  Test flights are set for January, and the aircraft is scheduled to participate in the Green Flight Challenge in July at Santa Rosa, California.  There, it will have to fly a  200 mile closed course on a single charge of its batteries at an average speed of 100 miles.

Calin Gologan, head of the PC-Aero, is confident his plane has what it takes to win.  “Elektra One needs only about 6.5 kW/h at 100 MPH. This will be equivalent with about 500 passenger MPG. The requirement for the NASA-/CAFE-Green Flight Challenge is 200 passenger MPG.  We will be 2.5 times !!! better.

“If Elektra One would use a normal combustion engine we would burn about 0.5 gallons per 100 miles. This corresponds to the limit required score of 200 passenger MPG.”  Elektra One could be the first of a series of small aircraft, including a tw0 and a four-seater – all electrically powered.