Is there a Fisker battery in the future of electric vehicles?  The latest proclamations from Henrik Fisker indicate he is ready to launch a lovely four-seat car for CES 2018, and that it will have LG Chem batteries capable of powering the vehicle for 400 miles.  Charging the batteries for nine minutes will add 125 miles range.  That’s definitely competitive, but Fisker promises more for a future EMotion supercar.

Fisker claims that machine will have newly-patented solid-state batteries that charge in a minute, have 2.5 times the energy density of currently available lithium batteries, and will be far cheaper to manufacture than today’s cells.  That’s in 2023, five years out.

“Five years out” has been the refrain for hydrogen-powered cars for perhaps five decades, and is a useful predictive metric for innovators seeking investors, who will wait patiently (theoretically) for a return on investment.  Your editor rushed to see a prototype Fisker on display about a decade ago.  The car sat in lone splendor at a local dealer’s showroom, and Fisker reps opened the car’s doors to show the splendid interior, but not the hood or trunk to dazzle us with the motor or batteries.  One left the display with the suspicion that what we saw was a “glider,” an unpowered, incomplete body shell on wheels.  Five years out, the company was in bankruptcy, much to the chagrin of investors.

Fisker raised enormous amounts of money to develop and build the showroom display pieces – “almost $1.4 billion… from investors as diverse as Leonardo di Caprio and Kleiner Perkins, [would] obtain a $528 million loan from the U.S. Department of Energy, balloon to 600+ employees, default on loans or investment conditions at least four separate times, spend $535,000 on a website, get sued by its own employees, get evicted from its primary business location, and be investigated by the government — apparently for its incredible ability to burn a billion dollars while delivering only a few thousand actual completed cars,” according to Venturebeat.com. 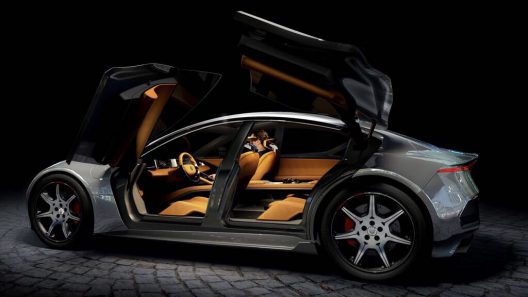 Fisker made fewer than 2.200 cars finally, each costing about $900,000 and being sold to dealers for $70,000 each.  To paraphrase the old business maxim, “You can’t make that up on volume.”  Fisker left an enormous amount unpaid to creditors, including the U. S. government.  Yet even after that venture capital defeat, Fisker is poised to release an updated car, the EMotion, and announce a solid-state battery breakthrough.

The car, already shown to the world on social media, will be on display at CES 2018, according to Fisker.  Electrek.com, though, voices suspicions about the “unbelievable claims” announced by Fisker.

These begin with the announced $129,000 price, not for a base model, but for the car with batteries enough for 400 miles range and that will enable nine-minute charging to add 127 miles when the car is partially discharged.  Fisker claims, “Fisker EMotion will come with state of the art NMC (Li-ion) chemistry produced by one of the world’s leading battery companies, & Fisker proprietary battery pack, giving the vehicle over 400 mile range. We still continue our efforts in advancing battery research in Graphene & Solid State chemistry!”

The future is electric, autonomous & connected. An exciting time for automotive disruption! See us on History Channel:

Given similar weights and volumes, Fisker would need a battery pack about 30-percent bigger than that in a Tesla S 100 using the best of current technology.  Electrek does give a nod to improved battery technology that will be available by 2019, when the initial car is ready for sale.  Other manufacturers, “like Lucid Motors, are planning similar energy capacities in their cars on a similar timeline.”

Electrek’s misgiving about the nine-minute claim comes from the fact that few, if any, chargers are capable of that performance at this time.  We can assume this will improve as larger vehicles such as buses and Tesla’s Semi come on line and will require ever-larger chargers.

If Fisker can pull off the introduction and timely production of its four-door speedster, its 2023 goal of having a solid-state battery technology is still in question.  The company has released an image, ostensibly of the battery contained in their patent filing, which shows a lithium-manganese-cobalt-oxide (NMC) layer, with a conductive polymer layer as the top layer, a current collector immediately above the NMC layer, and a “proprietary electrolyte” as the bottom layer. 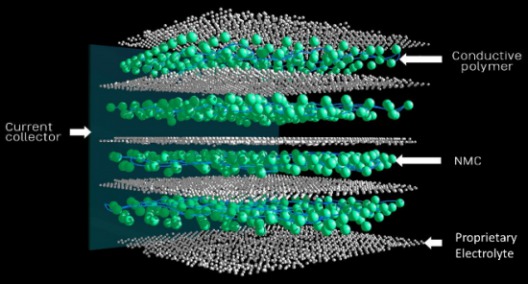 Doctor Fabio Albano, Vice President of battery systems at Fisker Inc., claims that the firm is overcoming several obstacles in solid-state battery development, including making scalable, low-cost materials and systems work toward the goal of a battery with 2.5 times more energy per kilogram than conventional lithium cells today.  The battery’s “bulk three-dimensional solid-state electrodes with 25 times more surface area than flat thin-film solid-state electrodes,” will enable faster charging and greater energy density.  That is as reported in GreenCarCongress.com on November 13.

But an August report from Green Car Reports tosses some cold water on this heated speculation.

“Interestingly, the EMotion electric car’s specifications haven’t changed despite Fisker’s earlier statement that the car would not feature the solid-state graphene battery technology he had once promised.

“Fisker and UCLA’s Nanotech dissolved their joint venture to create and engineer the graphene batteries earlier this year.

“It would have been one of the earliest automotive applications of the technology.”

Fisker’s success, then, would seem to hinge on battery development within the company, headed by “A co-founder of solid-state battery start-up Sakti3.”  Others, including Toyota, are pressing forward on solid-state battery development.  In the meantime, the regular eight-percent-per-year increase in battery energy density should progress, with longer-term, but less immediately exciting results.