Robert Adam, one of the organizers of the Green Speed Cup in Germany and pilot of the Flight Design CTLS that ended the competition in seventh place, shared some information on the challenges faced by pilots in this year’s event. 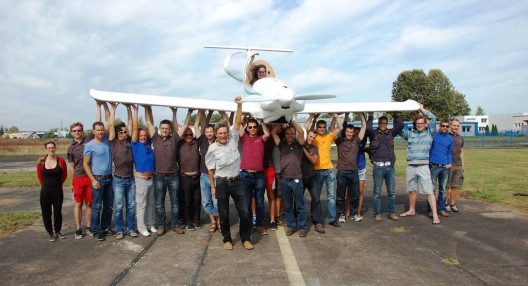 “We had 12-15 knots crosswind today (only a little less yesterday) and Tim-Peter (-Voss) managed this demanding taildragger (the SPACEK s.r.o. SD-1 microlight) calmly!”  This very light and short-coupled airplane flies with a variety of two- and four-stroke engines, but Voss’ had a Verner JVC-360 four-stroke unit of 38 horsepower.  It averaged a little over four liters per hour fuel consumption per 100 kilometers (59 mpg) over the practice day and two contest days.  In the Green Flight Challenge, it would have been penalized for being a single-seater and thus having a lower passenger-mile-per-gallon figure than the two, and even four-seat entrants.

The TDI turbo-diesel DA-40, for instance, would have had a 4X passenger mile per gallon figure if that had been a scoring factor in the GSC as it had been in the GFC.

“With the late date this year, we had challenging wind tasks, but we really miss the thermal factor. This is a fact we will work on next year. We will definitely shift the date into the summer months….”

The Taifun 17E, a retractable gear motorglider, would probably have done well if its engine had not developed a fluid leak and grounded it during the event.

The video shows Robert Adam and his co-pilot navigating over part of the day one course, flying the Flight Design CTLS.

The lack of thermals and stiff winds probably cut down on everyone’s total economy for the event, but could not preclude e-Genius from showing its clear superiority from an aerodynamic and energy use standpoint.

Rudolf Voit-Nitschmann shared some of his thoughts on the aircraft at the Green Flight Challenge two years ago, explaining that electric power allows designers to make choices otherwise unavailable when dealing with internal-combustion engines.  The placement of the motor high on e-Genius’ vertical tail, for instance, leaves the upper half of the propeller disk in clean air, and only the lower part of the propwash creating extra drag on its impacting the fin and rudder. 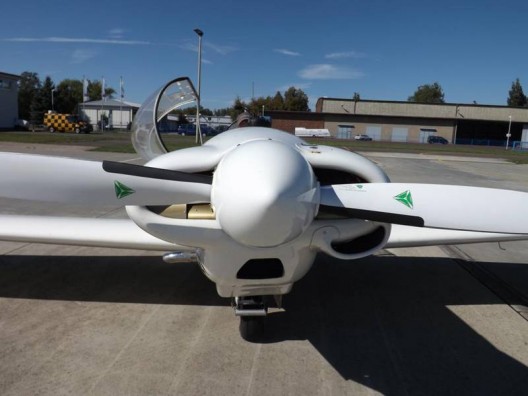 Cooling drag is lower for electric aircraft.  Gene Sheehan reported 15 percent lower drag with an electric motor in the e-Quickie than the Onan engine originally mounted in the design.  Since internal combustion engines are usually no more than 30-percent efficient in converting fuel to thrust, 70-percent of the heat energy has to be dissipated, creating a severe drag penalty.  A 90-percent efficient electric motor has to rid itself of a great deal less heat loss.

Having an engine in the nose of an aircraft means having large openings in the cowl to bring fresh air in for cooling, something not as “clean” as the smooth noses on sailplanes, which allow laminar flow over much of  the front of the airplane – at least up to the wing juncture. 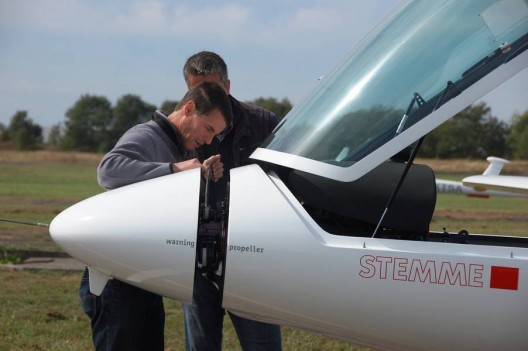 Stemme works to reduce this problem by mounting the engine behind the pilots and running a drive shaft to the clean nose.  In the S10, this includes a clever disappearing propeller which allows the airplane to soar on good days.  This would have been an advantage on better, “green air” days. 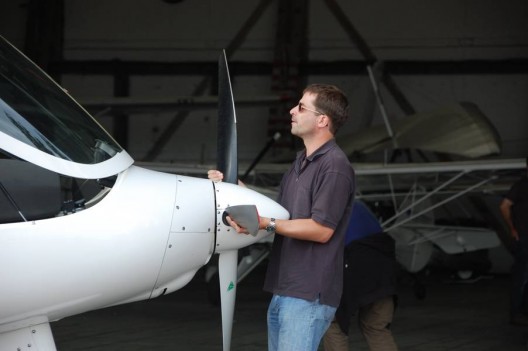 Congratulations to the group for running a wonderful, and apparently very friendly, competition.  The range of aircraft entered this year, old and new, traditional and visionary, will help drive aircraft design and piloting to new levels.