Only a few months after the first heavier-than-air hydrogen-fueled crossing of the English Channel (See Man of La Manche, October 29), the Naval Research Laboratory flew its hydrogen fuel cell-powered Ion Tiger for an endurance record of 26 hours and one minute.  The flight took place on November 16th through November 17th. 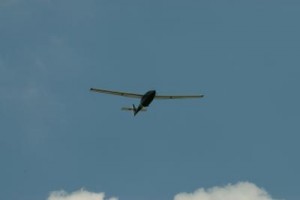 The Navy press release claims, “Fuel cells create an electrical current when they convert hydrogen and oxygen into water and heat.  The 550 Watt (0.75 horsepower) fuel cell onboard the Ion Tiger has about four times the efficiency of a comparable internal combustion engine and the system provides seven times the energy in the equivalent weight of batteries. The Ion Tiger weighs approximately 37 pounds and carries a 4- to 5-pound payload.”

This endurance record follows an October 9th and 10th unofficial record of 23 hours and 17 minutes.  The NRL hopes to increase the power output of the fuel cell to 1.5 kW, or about 2 horsepower, to enable the Tiger to carry “tactical payloads” and increase its its endurance to three days.

It is interesting to compare this flight with duration records previously set by solar-powered aircraft in roughly the same performance category.  Alan Cocconi flew “So-Long” for over 48 hours in 2008, the first two-day, two-night solar-powered flight.  Recently, culminating a series of flights of increasing duration, QuinetiQ’s Zephyr managed an 83 hour, 37 minute record in 2008, and joint UK/US testers are trying for five days.  Like Cocconi’s machine, the aircraft used batteries to store excess solar energy to fly through the night.

Who will be the next to set a record?