At the World Symposium on Electric Aircraft, AirVenture’s overview of electric aircraft progress, the morning session ended with the presentation of the LEAP (Lindbergh Electric Aircraft Prize) awards. 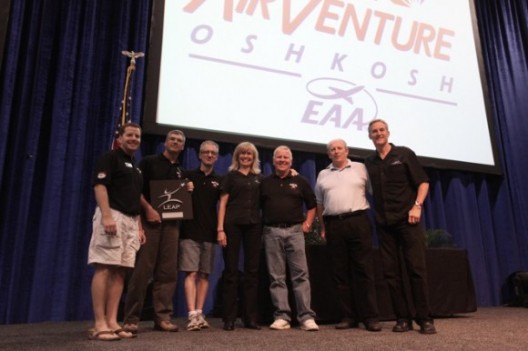 Erik Lindbergh, grandson of Charles and Anne Morrow Lindbergh and founder of the Creative Solutions Alliance, announced the winners at the July 30 session.

According to the Alliance’s press release, “LEAP is a suite of prizes that recognizes significant contributions to the development of practical electric flight, and stimulates meaningful advances in the fledgling electric aircraft industry. LEAP awarded a total of $25,000 in prize money, an amount equal to the Orteig prize that was won by Charles Lindbergh for his 1927 solo crossing of the Atlantic Ocean. In doing so, Charles Lindbergh changed the world’s perspective about the potential for aviation and opened the door for today’s $300 billion dollar aviation industry.”

The award for “Best Electric Aircraft: Awarded for the best example of a practical electric aircraft in any category – Experimental, LSA, or Certified” went to Shanghai-based Yuneec, “In recognition of Yuneec’s accomplishments in the design and engineering of the E430, an aircraft with significant commercial potential. With attention to production and market considerations in addition to a compelling design, Yuneec’s efforts have resulted in an aircraft that could make possible practical, sustained electric flight.”

The “Best Electric Aircraft Sub-System or Component Technology” award was given to Sonex, “For the design and engineering of the eFlight Initiative electric propulsion system architecture. Their innovative engine cooling system, motor controller, battery pack, and integrated safety systems point to a thorough understanding of needs of the market with an eye toward commercialization, while mitigating potential safety issues.”

Axel Lange won the “Individual Achievement Award: granted for significant individual achievement in the field of electric flight for a single event or cumulative effort in any of the following areas: engineering, design, public outreach, regulatory, or education.”  The award recognized Lange’s, “Leadership and vision in the development of the Antares 20E, which is the world’s first certified production electric aircraft.”

According to LEAP organizers, “The 20E demonstrates a level of innovation, engineering, and integration that is currently unmatched. The 20E’s simplicity of use and elegance of electric power-train integration indicate a level of excellence in engineering and design that warrant this award.  Of particular interest is the fact the system monitors itself, and notifies the pilot of battery system status and potential failures.”

Clive Coote of Yuneec returned the company’s award to the Alliance for its ongoing educational programs.

In 2011, LEAP awards will be presented at Aero-Friedrichschafen in Germany as well as at AirVenture.