Sun n’ Fun, following a disastrous sweep by an F1 tornado through the flight line on Thursday, March 31, came back strong the following day, with F-22 demonstration flights, the Blue Angels, and a full contingent of top-drawer aerobatic pilots.

The Green Aviation exhibits your editor had hoped to visit were partly gone, tents and exhibits having been dismantled and carted away in the remarkable overnight cleanup effort that took place, but the Embry Riddle Aeronautical University (ERAU)/Lindbergh Electric Aircraft Prize (LEAP) Stemme S-10 gleams undamaged in the sun.  Lisa Costello, a graduate student in aeronautical engineering, explains some highlights of what the students are crafting.

Entered in the upcoming Green Flight Challenge, the S-10 was to use a combination of hydrogen fuel cells and lithium batteries for motivating an electric motor.  That hybrid has been replaced by a Flight Design/Rotax hybrid that combines a 100 horsepower engine with an electric motor for power. 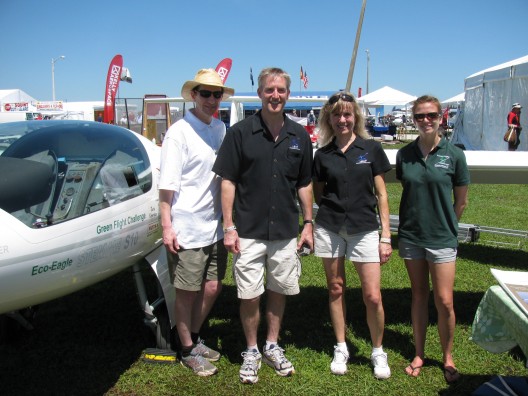 Lisa suggests we go to a nearby tent, where Erik Lindbergh, grandson of the famed trans-Atlantic solo aviator, is holding a press conference to announce details of the program’s new sponsorship by the Sikorsky Aircraft Corporation and LEAP’s April trip to the Friedrichshafen Aero Expo, which will include awarding prizes to the winner of the Berblinger ULM flight competition, a “green aviation” contest that will include several entrants in the Green Flight Challenge.  At least 24 aircraft have qualified for the event, with a range of propulsive means, including solar power, fuel cells, batteries, and aviation gasoline.

Prizes, awarded twice a year are “recognition awards,” Erik emphasizes, meant to provide incentives for creative individuals who will often use prize money to continue their efforts.

Despite the luster of such a gathering, Erik explains that it’s really the students who comprise the point of LEAP.  His face lights up as he points to the Hale Academy students and their mentors who are making a film about the Embry-Riddle project.  Film-making is an integral part of LEAP, with a film festival to be held in Seattle in Fall, 2011 to highlight student films about various aspects of green aviation.  Videos involve identifying problems, researching solutions with experts, and documenting solutions.

Erik, his brother Morgan and c0-CEO Yolanka Wulff field questions and invite students from Embry Riddle and Hale Academy to speak.  Lisa Costello and team leader Dr. Richard P. Anderson give a brief explanation of the school’s part in LEAP, and are followed by students from Hale Academy, who are documenting the ERAU project.  This coordinated work with students from K-12 is already a part of Embry Riddle’s outreach in Science, Technology, Engineering and Mathematics (STEM) education. 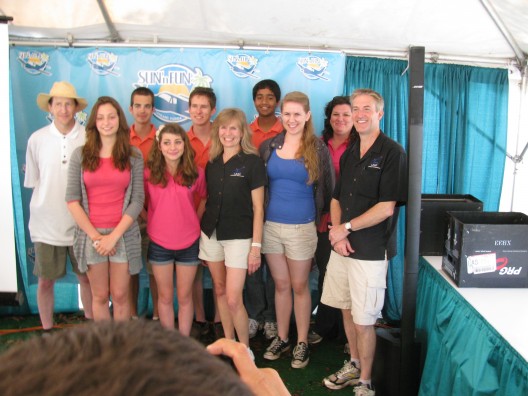 With this type of support and the intense committment of these students, aviation does have a bright future.  Suggest this type of program to your local school board.  No – demand it.
One last note: The Lindy Hop, for those too young to have danced it (all of us) was a terpsichoreal fad after Charles Lindbergh “hopped” the Atlantic in 1927.