Multitudes of researchers have exercised their mental muscles trying to make man-made products mimic naturally-occurring structures.  According to University of Michigan researchers, the cartilage in your knees might provide the inspiration for a “structural battery” prototype that would be durable and easy to shape.

This blog has long promoted the idea of structural batteries, energy storage systems that could double as strengthening elements in the aircraft shell.  Storing energy in car bumpers or airplane wings has some risk elements.  What will happen to a battery cracked by collisions on the ground or excessive loads in the air, for instance.  Nicking or puncturing existing batteries can cause flaming catastrophes.

As U of M researchers note, “[Structural batteries] been a long-term goal for researchers and industry because they could reduce weight and extend range. But structural batteries have so far been heavy, short-lived or unsafe.  The school’s tests, described in ACS Nano, ended up with damage resistant, rechargeable zinc batteries with a “cartilage-like” electrolyte.  According to their paper, they replaced the top casing on several commercial drones with their structural batteries.  “The prototype cells can run for more than 100 cycles at 90 percent capacity, and withstand hard impacts and even stabbing without losing voltage or starting a fire.”

Research leader Nicholas Kotov, Professor of Engineering at the Joseph B. and Florence V. Cejka, explains, “A battery that is also a structural component has to be light, strong, safe and have high capacity. Unfortunately, these requirements are often mutually exclusive.” 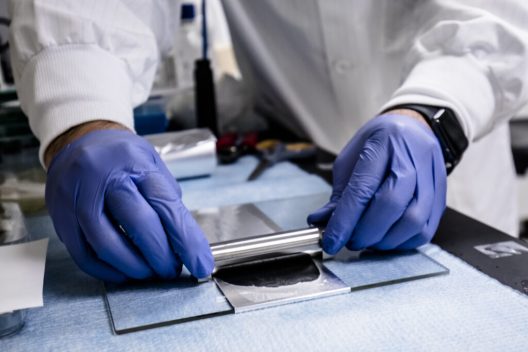 Ahmet Emrehan Emre, a biomedical engineering PhD candidate, casts a manganese oxide slurry onto a sheet of aluminum foil to serve as the cathode of a prototype structural battery in the University of Michigan North Campus Research Complex in Ann Arbor, MI on December 21, 2018.

Researchers “sidestep” these problems by using zinc and branched nanofibers that resemble the collagen fibers of cartilage.”  They form a membrane with the material that resists dendrite puncturing.

Kotov explained, “Nature does not have zinc batteries, but it had to solve a similar problem.  Cartilage turned out to be a perfect prototype for an ion-transporting material in batteries. It has amazing mechanics, and it serves us for a very long time compared to how thin it is. The same qualities are needed from solid electrolytes separating cathodes and anodes in batteries.”

The mechanical strength and durability of cartilage with the ability to let water, nutrients and other materials move through it are nearly identical to those of a good solid electrolyte, which has to resist damage from dendrites while also letting ions flow from one electrode to the other.

Kotov’s team’s membranes shuttle zinc ions between the electrodes, and also stop zinc’s piercing dendrites. Like cartilage, the membranes are composed of ultrastrong nanofibers (taking the place of collagen) interwoven with a softer ion-friendly material (polyethylene oxide and zinc salt).

Note corrugated form of structural battery. This adds stiffness and area for additional interactions between electrolyte and electrodes

U of M reports, “To make working cells, the team paired the zinc electrodes with manganese oxide—the combination found in standard alkaline batteries. But in the rechargeable batteries, the cartilage-like membrane replaces the standard separator and alkaline electrolyte. As secondary batteries on drones, the zinc cells can extend the flight time by 5 to 25 percent—depending on the battery size, mass of the drone and flight conditions.”

To demonstrate their batteries are safe, the team deliberately cut and stabbed their cells.  The batteries did not smoke or ignite and continued to produce their design voltage despite the damage.

Because the zinc batteries are unable to charge and discharge as quickly as lithium cells, they are used as secondary or backup batteries. Kotov and his team research potentially better electrodes that are quicker charging and longer lasting.

Work was supported by the Harbin Institute of Technology and the Michigan Institute for Translational Nanotechnology (MITRAN), in Ypsilanti, Michigan