Aviation Week’s Graham Warwick reports, “Europe plans to develop and test modular hybrid-electric propulsion technology using light aircraft as testbeds, but it is also studying whether the system can be scaled up to power 19- and 70-seat commercial aircraft.  The MAHEPA Program intends to bring cleaner skies to Europe.

Pipistrel will supply two well-tested aircraft for HAHEPA’s continued investigation of lowering emissions and expanding performance capabilities.  First, its Hypstair hybrid four-seater is already at a technology readiness level (TRL) of 4, and MAHEPA will raise that to 6, ready to enter product development.  Second, its eight-year-old G4, the battery-powered winner of the Green Flight Challenge and now converted to the HY4 for its role in furthering hydrogen aviation will be converted once more to hybrid power.

Igor Perkon, research and development program manager at Pipistrel Vertical Solutions, told the American Institute of Aeronautics and Astronautics Aviation 2018 conference in Atlanta, Georgia in July, “The main objective of this project is to address the gap between research and production.”  The project will modularize different systems such as thrust generation, power generation, human-machine interfaces and computing.  Perkon says, “These will be universal, and we will be able to switch them between different aircraft to do the flight test.” 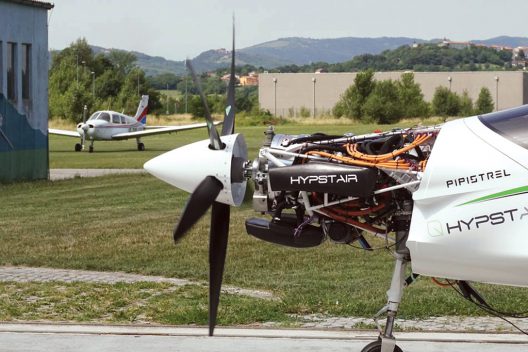 He goes on to explain the need for modularity.  “Why modular? Because we don’t know what kind of airplanes we will have in the future.  That is why it is good to prepare for the future, so that we can distribute these modules, however we want, and obtain aircraft for different utilization purposes

Pipistrel’s Pantera will be equipped with fuel and battery modules in the wing and the electric motor thrust generator and range-extending internal combustion engine in the nose.

The second testbed, the HY4—according to Aviation Week, is “a four-seat aircraft that flew in September 2016 with a hydrogen-fuel-cell powertrain developed by German aerospace center DLR. Operated by DLR spinoff H2FLY, the HY4 is a modification of Pipistrel’s dual-fuselage, battery-powered Taurus G4. The HY4 will have hydrogen fuel tanks and battery packs in the fuselages, and fuel cells and motor in the central nacelle.”

With its two testbeds, Pipistrel will act as project coordinator, heading architecture and power module development.  This seems a good role since the two craft are well-proven and the highest efficiency machines in their categories.  The company will integrate and flight-test the powertrains on both aircraft.  Partners include German motor and inverter developer Compact Dynamics, ULM University, Technical University of Delft, Polytechnic University of Milan, and University of Maribor, Slovenia.

Pipistrel and MAHEPA partners will ground test the combustion-engine-based hybrid-electric powertrain in 2019, followed by flight tests in the Pantera in 2020. Tests of the HY4’s hybrid systems will follow in 2020.

Perkon explores the future.  “We will also do a scaling study of 19- and 70-seat aircraft, and do it in two different configurations.  One will use the same size modules, but more of them, for distributed electric propulsion. The other will increase the size of the modules, by extrapolating the flight-test results, to power a dual-propeller aircraft. The study will show us which is better for the future.”

Flights of the hybrid-powered Pantera and HY4 will test system behavior, measure performance and reliability, and evaluate failure modes. “The data we collect will allow us to do the scalability study and will be the basis for certification of future of hybrid-electric propulsion systems,” he says.

Perkon says MAHEPA seeks “to reduce the failure rate to as low as in airliners, so one failure per 10 million hours of operation.”  Near-, medium- and long-term scenarios will examine how new ground infrastructure can support future hybrid-electric aircraft.  Other studies will find routes toward emissions reductions.

MAHEPA includes that consideration in its mission statement: “The reduction of energy consumption in aviation leads to high social, environmental and economic benefits and will ensure its sustainability. It leads to improved resource efficiency, reduction of CO2 and NOx emissions as well as a decrease of the particulate matter. If no actions would be undertaken, the adverse impact of aviation on the environment would significantly grow due to the expected increase of air transport traffic by 5% every year. Improvement of the environmental impact of the aircraft can be achieved for instance through better engine efficiency and advanced combustion technologies, improved aerodynamics or reduction of the weight of an aircraft.”

Perkon concludes that producing a modular powertrain architecture as the basis for future standardization, “will show that, by funding a small project that is not that expensive, we can extrapolate the results and use them for megawatt aircraft of the future.”