GENeco, a United Kingdom waste treatment company, announced its new green alternative to fossil fuels – the methane from waste treatment plants.  Proposed over 40 years ago in the U. S., the energy source was ignored as an automotive (and potential aircraft fuel) for four decades because it was too “dirty” a fuel (insert obligatory joke here), although GENeco has been able to remove CO2  that would otherwise be problematical in an economical enough way to allow its use in vehicles.

The company’s web site explains their expertise in such matters.  “Part of the Wessex Water group of companies, GENeco has the resources, experience, skills and financial strength to offer secure, long-term commitment to businesses, organisations and the agricultural sector looking to become more environmentally friendly.

“Generating around 35GWh of electricity a year, with the exception of landfill gas, we are producing more electricity than all the other forms of renewable energy combined in the region we operate, which includes Dorset and the former county of Avon. 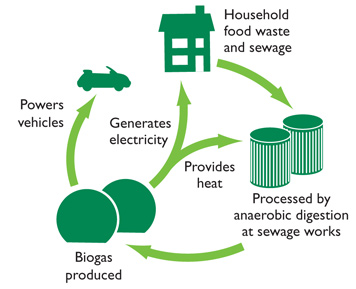 “Research suggests that nationally, the anaerobic digestion of food waste, livestock slurries, sewage sludge and energy crops to produce biogas could contribute approximately 10 to 20TWh of the UK’s heat and power by 2020, which represents up to 7.5% of the renewable energy estimated to be required by 2020.”

Questioned on Dylan Ratigan’s MSNBC news program this afternoon, company General Manager Mohammed Saddiq noted that a VW Beetle is driving about the streets of Bristol, and is known to the company as the “Bio-Bug,” but to locals as the “Dung Beetle.”  (Insert rim shot here.).  He explained that 70 toilets in Bristol provide enough raw materials to drive the Beetle 10,000 miles per year. 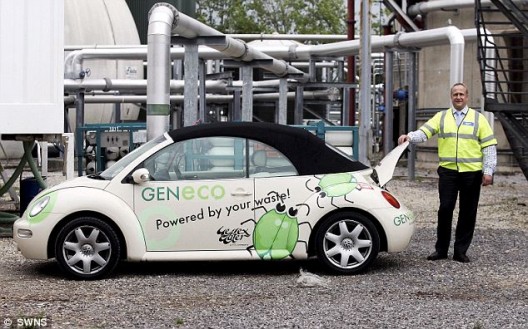 Besides generating fuel for the Bio-Bug from the methane released during sewage treatment, the waste treatment plants provide their own plant electricity through burning the biogas and then supply surplus electricity to the national grid.

“With the surplus gas we had available we wanted to put it to good use in a sustainable and efficient way.

“We decided to power a vehicle on the gas offering a sustainable alternative to using fossil fuels which we so heavily rely on in the UK.

“If you were to drive the car you wouldn’t know it was powered by biogas as it performs just like any conventional car. It is probably the most sustainable car around.”  The lightly converted Beetle loses no performance to the new fuel, being able to hit 114 mph.

GENeco claims that, “If all the biogas produced at Avonmouth was converted to run cars it would avoid around 19,000 tonnes of CO2.”

Besides producing methane gas, the firm’s waste treatment plants supply biosolid fertilizer to the region’s farmers, and are set on processing food wastes to increase production of fuel-grade methane.

The diversion of otherwise toxic wastes to more benign purposes and the beneficial effects to the environment certainly make this a process worthy of study.