Better, Cheaper, Faster.  That was the mantra when your editor worked in the semiconductor manufacturing world.  Designs, processes and materials were all recalibrated constantly to enable the march toward those three goals.  And to some extent, constant repetition helped us achieve the ideal of Moore’s Law, the dictum that computer chips would double the number of transistors they contained every two years.  Transistor density in computer chips determines the level of performance they can achieve, and this doubling has yet to reach its end.

Unfortunately, batteries haven’t doubled in performance every two years, but seem to follow an annual five-to-eight-percent increase in energy density.  This would mean, at best, that energy densities would double every nine years.  The Tesla Forum notes this progress would not be continuous, but introduced in steps.

Without either party sharing much information on the energy densities of their experimental cells, researchers in America and Switzerland find the “super environmentally friendly” nature of fool’s gold in batteries readily apparent.  One uses nanocrystals of the material, the other quantum dots.

Empa, “the Swiss Federal Laboratories for Materials Science and Technology, is part of ETH Zurich,  one of the world’s leading universities for technology and the natural sciences.  Empa researchers, working from the premise that lithium, the most common basis for high-energy batteries, is in short supply and therefore tending toward being more costly.  To counter scarcity and cost, they’ve devised their “fool’s gold battery,”

Maksym Kovalenko, Marc Walter and their colleagues at Empa’s Laboratory for Thin Films and Photovoltaics have combined a magnesium anode with an electrolyte made of magnesium and sodium ions. The cathode is nanocrystals made of pyrite (fool’s gold). 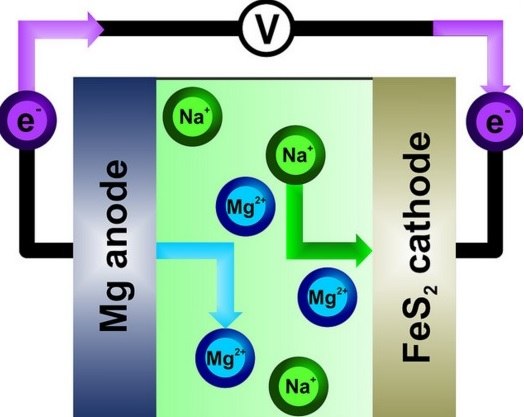 Because pyrite is crystalline iron sulfide, the electrolyte’s sodium ions flow to the cathode during discharging. During recharging, the pyrite re-releases the sodium ions.

A lab-based product so far, the battery has made it through a mere 40 charging-discharging cycles, but still has several potential advantages worth exploring.  The magnesium anode is far safer than highly flammable lithium according to researchers (not that magnesium fires are all that easy to extinguish). The research team thinks the best feature is that “Ingredients for this kind of battery are easily affordable and in plentiful supply: Iron sulfide nanocrystals, for instance, can be produced by grinding dry metallic iron with sulfur in conventional ball-mills. Iron, magnesium, sodium, and sulfur… hold 4th, 6th, 7th and 15th place by the abundance in the Earth’s crust (by mass). One kilogram of magnesium costs at most four Swiss francs, which makes it 15 times cheaper than lithium. There are also savings to be made when it comes to constructing the cheap batteries: Lithium ion batteries require relatively expensive copper foil to collect and conduct away the electricity. For the fool’s gold battery, however, inexpensive aluminum foil is perfectly sufficient.”

Empa scientists don’t see this as an EV battery – its output is too low.  Cost and environmental friendliness make the technology a winner for large, stationary plants, though.  The researchers’ paper in the journal, Chemistry of Materials, suggests using such a battery to temporarily store the annual production from the Swiss nuclear power station in Leibstadt, for instance.  Perhaps a lighter, longer-lasting battery is possible.

Kovalenko suggests, “The battery’s full potential has not been exhausted yet.  If we refine the electrolytes, we’re bound to be able to increase the electric voltage of the sodium-magnesium hybrid cell even further and to extend its cycling life. We also look for investors willing to support research into such post-Li-ion technologies and bring them to the market.”

Starting with an apparent flash in the pan, Vanderbilt researchers added quantum dots to a smartphone battery, enabling it to charge in only 30 seconds.  Unfortunately that only lasted a few charges.  Making iron pyrite quantum dots, nanocrystals 10,000 times smaller than the width of a human hair, and adding millions of those to the same phone battery caused it to charge quickly and last dozens of cycles – still nowhere near the longevity of commercial cells.

The team headed by Assistant Professor of Mechanical Engineering Cary Pint and led by graduate student Anna Douglas reported on this in the November 11 ACS Nano.  Like the Empa reseachers, they were drawn to the abundance and inexpensive nature of the material. 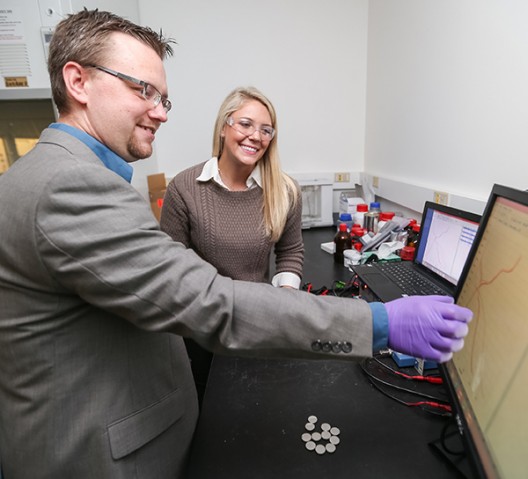 Sizing the particles was a major problem, though, and lack of longevity also plagues Vanderbilt’s initial effort.  Pint explains, “Researchers have demonstrated that nanoscale materials can significantly improve batteries, but there is a limit. When the particles get very small, generally meaning below 10 nanometers (40 to 50 atoms wide), the nanoparticles begin to chemically react with the electrolytes and so can only charge and discharge a few times. So this size regime is forbidden in commercial lithium-ion batteries.”

Despite all their promise, researchers have had trouble getting nanoparticles to improve battery performance.  They added millions of iron pyrite quantum dots of different sizes to standard lithium button batteries normally used in watches, automobile key remotes and LED flashlights.  Most successful were those about 4.5 nanometers in size, “substantially” improving cycling and rate capabilities.

According to Douglas, iron pyrite has a unique way to changing form into an iron and a lithium-sulfur (or sodium-sulfur) compound to store energy.  “This is a different mechanism from how commercial lithium-ion batteries store charge, where lithium inserts into a material during charging and is extracted while discharging — all the while leaving the material that stores the lithium mostly unchanged,” she explained.

Eschewing poetry for prose, Douglas explains further.  “Instead of just inserting lithium or sodium ions in or out of the nanoparticles, storage in iron pyrite requires the diffusion of iron atoms as well. Unfortunately, iron diffuses slowly, requiring that the size be smaller than the iron diffusion length — something that is only possible with ultrasmall nanoparticles.”

Bigger particles have a harder time fighting their way to the surface while the sodium or lithium reacts with the sulfurs in the iron pyrite.  That inability of the iron to move through the iron pyrite materials limits their storage capability.  Knowing just how big and small to make nanoparticles will affect how fast battery makers can trend toward Moore’s Law.

Pint concludes, “The batteries of tomorrow that can charge in seconds and discharge in days will not just use nanotechnology, they will benefit from the development of new tools that will allow us to design nanostructures that can stand up to tens of thousands of cycles and possess energy storage capacities rivaling that of gasoline.  Our research is a major step in this direction.”

Getting the basics down and making these batteries work as hoped is one thing.  Getting them light and energy dense for EV use is another – one which we hope researchers are able to solve.