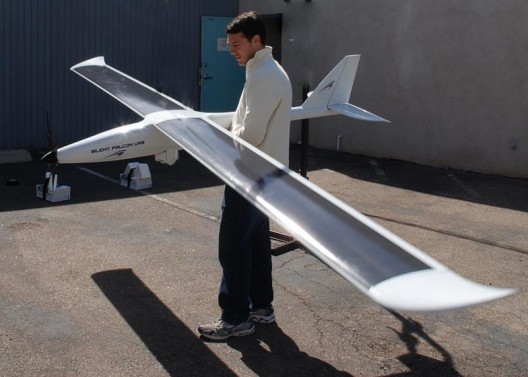 Portability and lightness of Silent Falcon are readily apparent here. Wings detach and entire craft with control system fits in a large case

The airplane, of all composite construction, will serve both military and civilian markets, with its small size and quiet operation able to serve well in either capacity.  Its size and weight are virtues in a competitive market, giving “unprecedented performance and value… ready for the market place,” and already in “low rate initial production,” according to John Brown, President of SFUAS.  He adds that “sales teams are targeting domestic, Latin and South Asia region trade shows in the next few weeks.”

Small enough with carrying case to fit in a Pelican case (the same type in which professional camera operators carry their gear), the airplane can be dismantled and carried in a pickup, SUV, or Humvee.  The package is 80.8 inches long, 22.4 inches wide and 15.0 inches deep, and complete with airplane, weighs only 90 pounds.

Much of the lightness is attributable to the compact nature of the electro-optical (EO) and infrared (IR) patent-pending “FalconVision™” camera system, with optional medium wave infrared (MWIR), “Hyperspectral”, and LIDAR (Light Detection and Imaging) sensors of equally small form available. 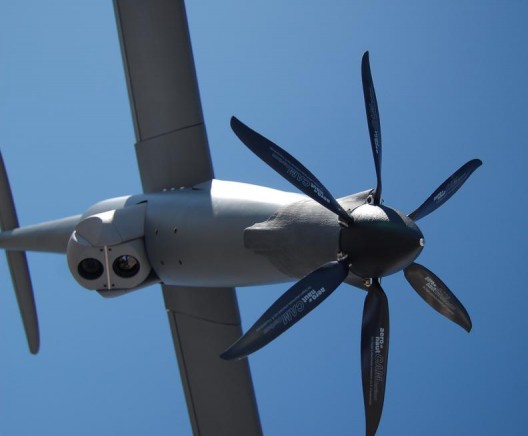 Because the airplane, even with the “long” 5.1 meter (16.38 feet) wings is undetectable under 200 feet above ground level, its cameras can recognize and identify human and vehicle targets readily.  Even with its 12-hour mission capability, the airplane can fly no more than 240 knots (276 miles) at its loitering speed of 20 knots (23 mph).  Although Silent Falcon can top out at 60 knots (69 mph), such speeds would reduce the endurance and possibly the range.

For sheriff’s departments or forest fire crews, such “limitations” would hardly be limiting at all.

Jeanne Roberts, writing for the Cleantech Blog, gives the Silent Falcon and its civil uses a clean bill of health and suggests broader use of such capabilities.

She would go beyond hunting down drug cartels and include bagging ivory poachers in Africa, locate survivors of major storms, and in preventive mode, perhaps forecast freak windstorms like the one that killed the 19-member “Hot Shot” fire crew last year.

George Bye, along with Calin Gologan, CEO of PC-Aero in Germany, will be speaking at the eighth annual Electric Aircraft Symposium on “Practical Solar-Electric Propulsion Advances – Manned and Unmanned systems.”  There is still an opportunity to register for the event, April 25 and 26 at the Flamingo Resort in Santa Rosa, California.