Its itinerary consisted of a flight from the Solar Impulse home base in Payerne, Switzerland to Madrid, Spain, followed by a jump across the Strait of Gibraltar, for the first time linking Europe and Africa by solar flight.

Because of its light wing loading, the airplane is subject to the vagaries of wind and turbulence as the ultralight aircraft it truly is, and was forced to turn back after battling the elements for half a day on its attempt to fly from Rabat, Morocco to Quarzazate, the site of the Moroccan solar agency’s huge desert solar generating site.  A second try met with success, although punishing turbulence caused Andre Borschberg to wait for a night landing when the air was relatively cooler and calmer.

Returning to Rabat, HB-SIA was subject to maintenance and inspections before its return flight to Madrid.  After sorting out weather alternatives, the team elected to send the airplane to Toulouse, France, from which it made its return to Payerne. 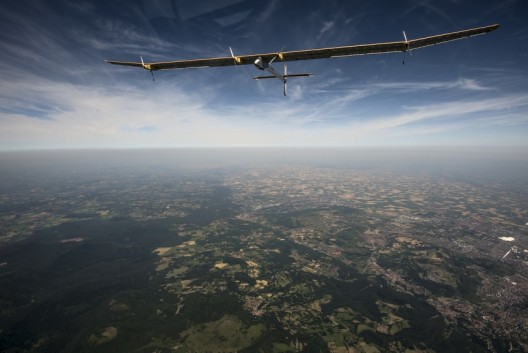 Solar Impulse over the Puy-de-Dome on its way back to Payerne, Switzerland. Photo: Solar Impulse | Jean Revillard

With HB-SIA back in its hangar, the team can look forward to completing its bigger brother, HB-SIB – a similar aircraft that will demonstrate new construction techniques, advances in electronic stability assistance, and improvements in solar cells, among other innovations.

HB-SIB will be 227 feet in span, compared to the 204 feet of the first prototype.  To help keep weight down, the craft will have a great deal of North Thin Ply Technology’s ultralight carbon fiber cloth in its composite layups.  Used for yacht sails and masts, hull construction, sporting gear and even Formula 1 cars, the material is incredibly thin and light, weighing around 25 grams per square meter for carbon fiber (about 0.75 ounce per square yard), 50 gsm (1.5 oz./sq. yd.) for glass fibers, and 20 gsm (about 0.58 oz./sq. yd.) for aramid fibers.  The tapes come in pre-impregnated or dry form, and in their lightest, strongest finished form, are laid down by computer-controlled machines that optimize fiber orientation often in multiple layers.  This construction was described by North Thin Ply Technology in their December 2011 newsletter.

“When the second solar-powered airplane project got underway, it became obvious to the shipyard and then to the Solar Impulse engineers that the NTPT complexes could offer an extremely valuable weight reduction for the second solar-powered airplane. After an intense research and development program run jointly by Solar Impulse and Decision S. A., the North Thin Ply Technology team is now fully involved in  manufacturing ultra-thin multi-orientation carbon fiber complexes for HB-SIB….”

During structural testing, however, the new spar design, which seemed to have a shear web of the ultra-thin materials rather than the carbon-fiber tube truss construction of HB-SIA, broke as the ultimate loads were applied.  Solar Impulse’s design team takes the setback as a respite that will allow improvements in their original design to be made before tackling the spar construction again.

Bigger wings mean more solar cells, 15,000 – 3,000 more than on the first prototype.  Viktoria Dijakovic, a blogger for the project, writes about the labor-intensive process of characterizing, testing, and hand-mounting each of the Sun Power (a San Jose-based company) cells.  Work is done in near clean-room conditions to prevent human exfoliation from marring the 300-cell arrays.  Cells are only 135 microns thick, important to the weight of the aircraft, and are 22.7-percent efficient, a bump from the original’s.

The new aircraft will have what will probably be a welcome addition, an Altran stability augmentation system (SAS).  This pilot “helper” incorporates a Flight Control Computer or FCC to monitor the flight characteristics of the craft and assist the pilot on the long-range missions that may last several days.  The SAS has a Monitoring and Alerting Subsystem (MAS) which aids in situational awareness, keeping tabs on aircraft dynamics and alarming if anything is out of a set range.  Actuators run by the SAS help control the ailerons, making the work of keeping control responses manageable, especially in gusty or turbulent conditions – as experienced in Morocco.

As the Solar Impulse team builds a new wing spar, lessons learned from HB-SIA’s illustrious history will undoubtedly continue to be incorporated.  We have high hopes for the team’s continued success.