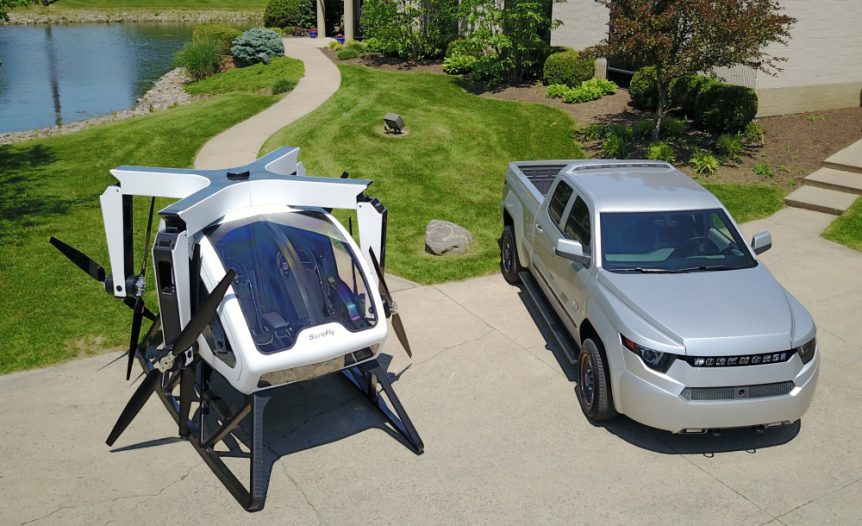 We’re experiencing a myriad of multi-rotors lately, mostly in the vertical lift on demand, sky-taxi  category.  Workhorse, a company specializing in electric vehicles, has introduced the Surefly, an eight-rotor, hybrid-powered two-seater with actual pilots in mind.  Workhorse will reveal the aircraft at the Paris Airshow on July 19, possibly filling in the blanks for the internal-combustion engine and electric motors on the machine.

The company started with an award-winning conversion of a Pontiac Sky and has leapfrogged into the creation of unique electric vehicles.  These include not only Surefly, but  a hybrid pickup truck, a hybrid medium-duty step van useful for local deliveries, and Horsefly – an eight-rotor drone capable of delivering 10-pound packages.  Horsefly is launched from the step van, especially helpful in rural areas.

Surefly, as noted, has few listed specifications, but we can guess the 7.5 kilowatt-hour battery packs are Panasonic 18640 units, since the company is partnered with Workhorse and their batteries form the packs on the pickup and the step van.  A battery pack and controller at the motor end of each foldable arm enables short cable runs.  Full redundancy on each arm will allow continued flight even with the loss of several components.  Stephen Burns, CEO of Workhorse, says they decided that there could be no single point of failure that would bring the copter down.  That would be a hard landing with the machine’s 1,100 pound “curb weight” and its 1,500 maximum takeoff weight.

It’s also set up to enable simple control and safeguard the pilot and passenger.  Burns wanted his son to be able to fly Surefly to school and avoid traffic jams along the way.  The young man graduated from high school before that became a reality.  Still, Burns sees certification possible by 2019, although he admits regulatory hurdles are harder to overcome than technical ones.

The helicopter borrows a great deal of the technology from the W-15 Pickup, its 7,200 pound Gross Vehicle Weight Rating yielding a surprising 0-60 time of 5.5 seconds.  The W-15 can run 75 miles on batteries alone, and up to 310 miles on a full tank.  For its weight and size, the 28 city mpg, 32 highway mileage figures are excellent.  The company reports 5,000 advance orders from fleet sales.

Bigger still, Workhorce’s step van carries a maximum weight of 19,500 pounds, including the Horsefly delivery drone.  A well-organized delivery program can save fuel and enable extended reach from a sequential locations.  The company’s Metron™ telematics program, used to locate and keep track of performance metrics, probably helps guide the drone to its intended destination.

Workforce has a wonderful range of products, and we look forward to Paris in July.