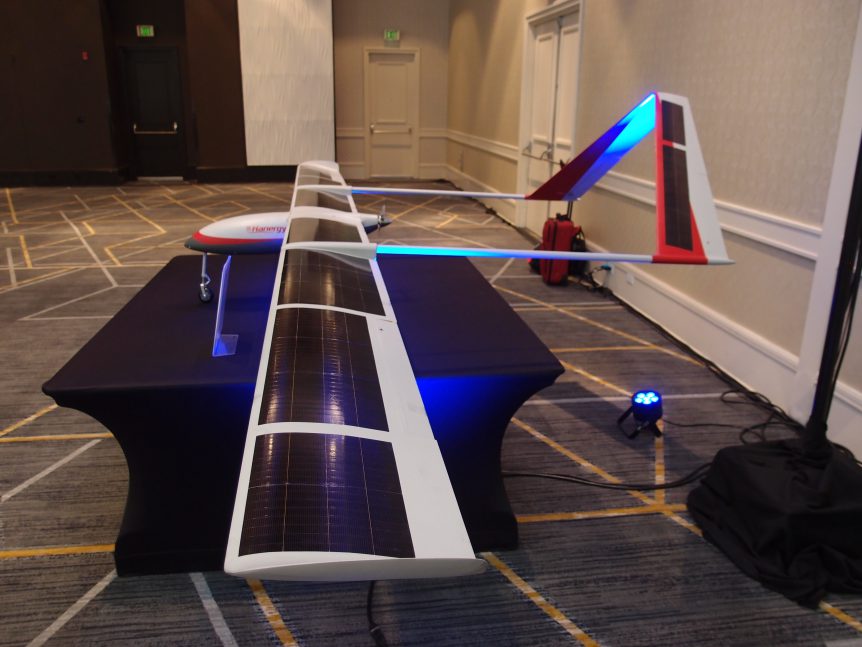 Getting personal once more, this entry highlights my adventures at the 2018 Sustainable Aviation Symposium as reported in the first person.

The Sustainable Aviation Symposium for 2018 began its Saturday session with J. Philip Barnes, the Senior Technical Fellow at Pelican Aero Group, who expanded an idea he has been developing for several years – that of flying on energy generated and stored by a self-launching sailplane’s motion through the air.  With both a single-seat Coulomb Keeper and larger Faraday First model to analyze, Phil turns to seminal works by Glauert and MacCready to create a motor/generator coupled with a propulsion fan that doubles as a propeller and windmill.  Clever use of switching in the control circuitry should enable high-efficiency prolonged flight exceeding what would be possible with batteries alone.  Phil’s website is well worth checking out, providing historical and engineering insights at every opportunity. 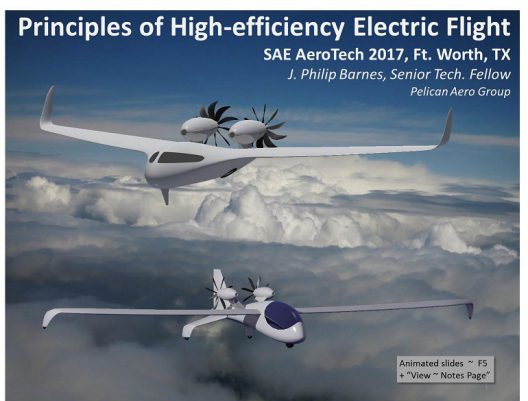 Boris Popov, founder of BRS (Ballistic Recovery Systems) has saved 380 lives (and counting) with his Whole Aircraft Rescue Parachute System (WARPS), giving him a better crisis-to-salvation ratio than your average superhero.  Motivated by the 20/20 television show that sensationally depicted the dangers of the ultralight craze of the 1980’s, and by structural failures that contributed to a tragic body count, Boris began his work that would lead to 30,000 systems sold, with one out of 120 deployed and potentially saving lives.  BRS has developed over 400 different installations,  ranging from hang gliders to four-seat cruisers such as the Cirrus propeller lineup and the SF50 Cirrus Jet.  His latest challenge is creating systems that will work with multiple rotating blades on the many sky taxis coming to our cities.  Letting one ton or larger vehicles down in urban environments is a test of Boris’s engineering skills, but one he will undoubtedly add to his list of accomplishments.  Below, see a sample of saving one life in desperate straits.

Sandwiching me and my presentation on my attempt to create the world’s cheapest electric airplane between Boris Popov and Dr. Jasenka Rakas, a professor at UC Berkeley, may seem a bit ludicrous, but I took my turn at comedy relief fairly seriously.  Surrounded by folks used to designing and building advanced vehicles using CFD, CAD, and often large amounts of cash, it may seem I will have a hard time getting even a Flintstone-type machine airborne.  Partly, I want to show myself that I can complete a viable, but budget-friendly ultralight airplane.  Luckily, I found one that was complete and mostly built with the exception of the left wing.  Even that requires only assembly of the spars, ribs, aileron, and flap – all done with a craftsman’s flair (so far).  The big question will be finding a motor, controller, and batteries that fit a penurious soul’s requirements.  Stay tuned as we continue this adventure in economy.  I will be installing a BRS unit, though, unwilling to save a buck in this crucial area. 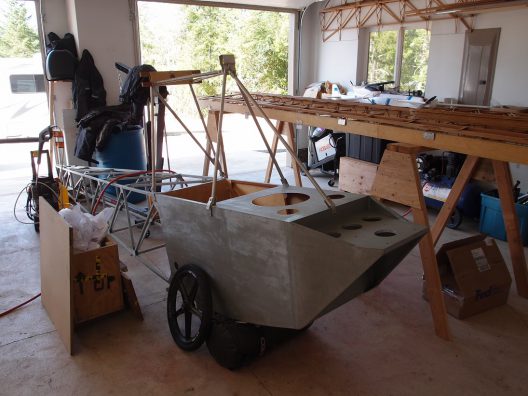 The Symposium took a turn at this juncture, moving from the technical to the effects this emerging technology will have on our society, and the changes we might have to make in our lives and the planning of our cities to accommodate what might become a massive disruptive influence.  Are we ready?

Dr. Jasenka Rakas, as mentioned, teaches at Berkeley, famous for its 1960’s revolutionary thought.  Her students get a different dash of radical thinking, envisioning helipads, vertiports, and pocket airparks as the new bases for urban mobility.  Looking at past efforts such as the Helicopter Network of the 1970s, and the planned but never realized vertiport, tilt-rotor concept for the NorthEast Corridor, she brought us back to earth with probing questions about how we will make all the pipe dreams of the future into realities.  Founder of the Airport Design Studio, she works with multidiscipline teams to create future airports “in support of the US National Airspace System (NAS) transformation into the Next Generation Air Transportation System.”  Her work truly gets down to earth, examining factors such as the economic effects of lightning strikes on airports, and means to ameliorate such effects.  Other factors include conversion of existing structures, such as piers, retroffited garages, skyscrapers, and roof tops for VTOL landing spaces, and adding new structures above highways to accommodate the new transportation systems. 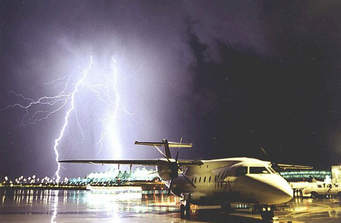 Dr. Rakas discussed the economic effects of lightning on air travel, and how planners must design craft and facilities that can cope with such power

After a break, we had three talks with different points of view.  Leading off, Todd Litman, founder and executive director of the Victoria (BC) Transport Policy Institute, discussed “Smart and Sustainable Urban Planning for Multi-Modal Transportation.”  He tossed some ice water on the sometimes heated speculation by noting that several factors make possible sky taxis and their effect on the infrastructure as, “Not as nice as it seems.”  He noted that rotor loading increases the noise level for VTOL flight, making such vehicles less desirable in an urban setting.  One possible unintended consequence would be to expand urban settings, though, with increased fringe development leading to greater sprawl.  We must consider how many added roads and parking spaces are necessary for access to the new air terminals, for instance. 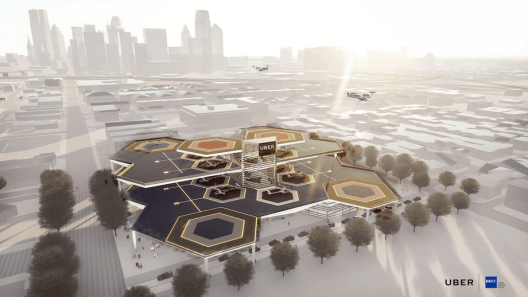 Daniel Sperling, founding director of the Institute of Transportation Studies at the University of California, Davis and professor of Civil Engineering and Environmental Science and Policy, is also a member of the influential California Air Resources Board.  His recent book, Three Revolutions, looks at automated, electric, and most important to Sperling, shared transportation.  Pooling is one of his answers to relieving the “car-centric monoculture” that is expensive and resource-intensive to maintain.  An automated car might cost an individual owner 60 cents per mile to operate, but pooling with others and filling all four seats would lower the cost per individual to 15 cents per mile.  He noted that time costs are lower for automated cars, enabling each occupant to read, surf the ‘net, or pursue other interests while being driven.  He explained that disruptions brought about by the three revolutions would affect taxis, transit, the automotive industry. oil companies, rental car agencies.  Insurance companies, parking garages, service and repair outlets, and parts suppliers.  Conservative forces will slow the transition to cleaner, more efficient transport as a self-protective move.  Even the rise of Uber and Lyft has had unexpected consequences, with carpooling dropping from 20 percent to nine percent of vehicles in use. 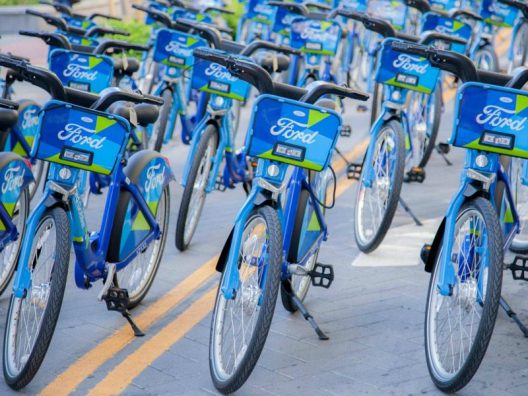 Will these be the Fords in our futures? Ford shares the market with at least Lime Bike, Blue GoGo, amd Jump on the streets of San Francisco,

In the meantime, advocates for automated autos will need to validate the Artificial Intelligence underlying their operation.  We will go through a process of asking “how safe is enough?” and determining when and where driverless cars should be allowed.  Sperling looked at cybersecurity and hacking concerns for automated vehicles, and speculated on their effects on liability and insurance.

Alissa Walker edits a web site called Curbed.com.  She tackles issues of urban mobility from the viewpoint of a woman who chooses not to own a car in Los Angeles, but instead relies on public transit, and true to her name, walking.  One of her recent posts comments on Uber’s architectural attempts to provide landing spaces for the many sky taxis the company anticipates filling the skies.  If one has read her writings in spaces such as Gizmodo, one can understand that she views such things with a proper distance and skepticism, and a clear eye for detail.  How, she wonders, will Uber manage to loft 4,000 passengers per hour from a three-acre site when more terrestrial transport when “the least-busy stations on Los Angeles’s bustling Red Line subway see about 4,000 boardings per day.”  She agrees with Daniel Sperling that Uber and Lyft are making traffic worse, causing people to choose private rides rather than public transit.  The numbers of cars increase.  She thinks that scooters and bicycles, currently subjects of interest in the bay area, will change the way we get around cities.  She cautioned the audience to listen to needs of any group they wish to serve. 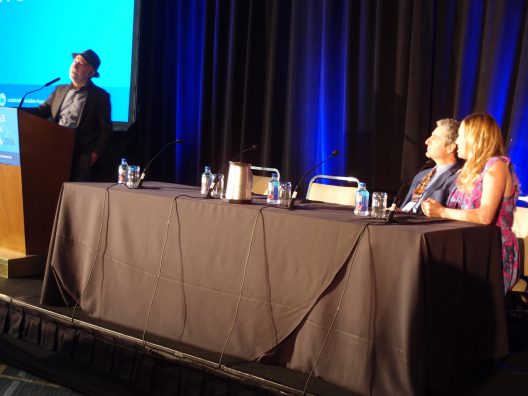 The morning ended with a panel moderated by Sperling and enlightened by his ideas and those of Litman and Walker.  We hope to have the full dialogue available soon, since it is both optimistic, but clear-eyed.

I always leave these events feeling optimistic that good design and rational approaches can help solve many of the self-inflicted wounds with which we live in our “car-centric” culture.  This year’s event was no different in that respect, but it added a social overview of issues that mere technology, no matter how sophisticated, can redeem by itself.