Imagine near-silent air races that don’t involve sailplanes. The Electric Aircraft Company (TEACO) near the Welsh border in Gloucestershire, England is proposing just such a series of races, combining the best of Reno-style pylon racing with Red Bull color and style.

Roger Mottram, founder of an association that will race these sleek, light craft, notes the elements that may help make such races possible and successful.  “Motors are getting smaller and becoming more powerful and battery technology is going the same way.  Our plan is to go ‘fast and furious’, unlike endurance planes, which rely on small motors and big wings.”

Note: different reports indicate a single 60 kilowatt (81 hp) motor driving a single propeller (shown in the few pictures) and other reports discuss the twin-motor arrangement. We’ll be following up with technical details as they become clear. 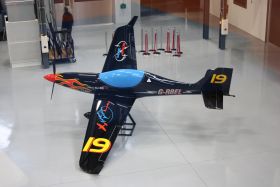 The symmetrical airfoil, one-piece wing spans 20 feet and has only 51 square feet of area. The fuselage is a mere 17 feet in length with smooth lines, but contains an energy-absorbing cockpit and ballistic parachute.  To jazz up the quietness, airplanes can even carry a sound system to help them make Spitfire or other noises in flight and broadcast sponsor’s messages when they are on the ground.

TEACO will show a full-size mockup of the Bat at Venturefest Bristol 2012, a science and invention showcase highlighting Bristol’s “Science City” reputation.  Their program explains,” The Electric Aeroplane Company (TEACO) are creating a record-breaking electric aircraft. The TEACO-Bat is a super-lightweight acrobatic aeroplane which will attempt to break the electric air speed record in 2013.  After setting the world record, the company’s long-term vision is to establish TEACO-Bat as an affordable kit aircraft. The company is looking for further investment to help it succeed in its world-record attempt.”