Dr. Yi Cui, assistant professor of materials science and engineering at Stanford University, is a battery scientist extraordinaire, and a presenter at last April’s Third Annual Electric Aircraft Symposium. His paper was well received, one in which he discussed how breakthroughs in his lab could lead to an 80-percent improvement in battery capacity for the same weight as current units. He has topped himself with an extraordinary approach to manufacturing batteries.

Imagine painting an ordinary piece of paper with a coating of carbon nanotubes and silver nanowires, and ending up with a very thin battery or supercapacitor. This video, courtesy of Stanford University, shows that process, and includes Dr. Cui lighting an LED with a small square of paper. He and his colleagues have abused the battery, washing it with acid and crumbling it, but it still produces current. He notes that they haven’t tried burning it.  Dr. Cui predicts that such batteries could be good for 40,000 cycles, a huge leap over the endurance of today’s best cells. 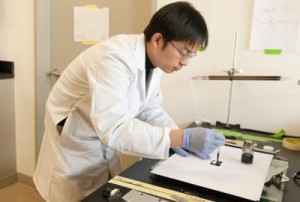