Honeywell and Safran have teamed up to create EGTS International, a company that makes Electric Green Taxiing Systems for airliners.  Honeywell has extensive experience with auxiliary power systems and Safran makes “world-class landing gear systems.”  Put them together and you have the self-powered landing gear which made its public debut at the Paris Air Show this week.   Others have been working on the same type of system, but  EGTS is the first to show the technology off at an air show. 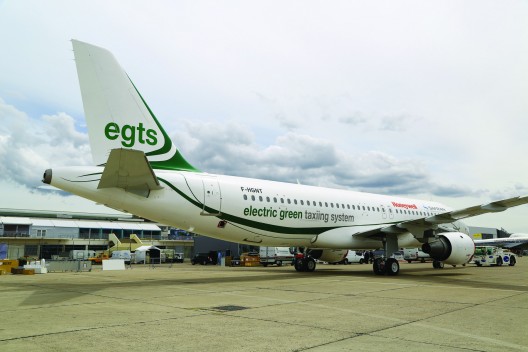 Besides making the display Airbus A320 one of the quietest airplanes moving across the tarmac at the show, the system could save airlines up to four percent per flight on fuel burn.  As the EGTS web site explains, “Because an aircraft’s main engines are optimized for flying rather than taxiing, they burn a disproportionate amount of fuel during ground operations. With a short- or medium-range aircraft spending up to 2.5 hours of its time on taxiways every day, EGTS could save approximately 600 kilograms of fuel used during taxiing from being consumed daily, according to Honeywell and Safran estimates.”

With its engines turned off during taxiing, there is less danger of picking up FOD (foreign object debris) from the taxiways and causing damage to the engines.  CO2 and nitrogen oxide (NOx) emissions are zero while the airplane has its engines turned off.  With reduced ground handling necessary, passengers can deplane more quickly.  With fewer vehicles at the gates and on the tarmac, safety and timeliness both improve.

The system may save on brakes, too.  Jens Berlinson, test pilot for Safran, says, “With EGTS we no longer need to use the brakes unlike with today’s aircraft that have a tendency to accelerate naturally even when the engines are at idle. This is especially valuable in busy airports, where planes are often queuing up for an extended period of time before take-off.”

An airliner will have a greater degree of autonomy, being able to push back and taxi between gate and runway without using its main engines.  The aircraft will use its auxiliary power unit (APU) to power the system, using a great deal less fuel than running the main engines, although not quite emissions-free.  Perhaps the next generation will use fuel cells or next-generation batteries to run things during ground operations.

The partners have a big future planned for this innovation.  “Since this aircraft’s ‘first move’ in April of this year, the EGTS fitted to it has logged close to 160 kilometers (100 miles) of rolling tests. These tests evaluate the system in various load configurations and runway conditions, through a series of complex maneuvers such as pushback, tight turns and U-turns, according to varying specifications of acceleration and speed. The next major milestone of the testing program following the Paris Air Show will be to conduct these same maneuvers at speeds up to 20 knots, at full performance and with the aircraft at maximum take-off weight (MTOW).”