Announced at Friedrichshafen’s Aero Expo and displayed (at least in model form) at the 2013 Paris Air Show, the Elektro E6 is the technology platform for a future, all electric transport aircraft. With low CO2 emissions, noise and vibration, the six-seat, two-motor airplane features full carbon composite structure.  Solar cells on its high wing could help extend the range for this machine to 500 kilometers (310 miles), predicted if battery developments continue at their current pace for the next six years.  The light twin would boast a payload of 480 kilograms (1,065 pounds).

The E6 comes about as part of an Agreement of Cooperation between PC-Aero GmbH and EADCO GmbH.  Rosario De Luca’s EADCO (European Aerospace Design Consultants), capable of supporting new designs from conceptual review through manufacturing has worked on projects for Boeing, Airbus, Fokker and Fairchild Dornier, along with Eurofighter.  Calin Gologan’s PC-Aero has seen the inception and test flights of the Elektra One, Solar One and the creation of the two-seat Solar Two with 14-meter (46 feet) or 17-meter (55 feet, 9 inches) wing and Solar Two Record, a 17-meter ship capable of flights up to 2,000 kilometers (1,240 miles).  An unmanned version for surveillance and observation will have an endurance of eight hours. 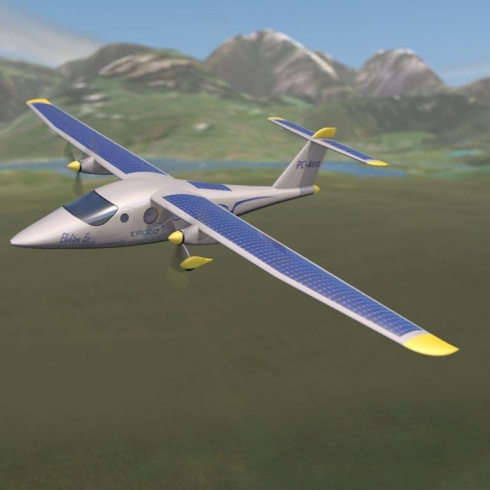 The team’s goals are to build a Proof of Concept vehicle in three years and achieve CS23 Certification (equivalent to FAR Part 23) in 10 years.

The Elektro E6 will include all systems of a normal commercial aircraft in the final version, including retractable landing gear, anti-ice system, cabin pressure and air conditioning, according to the companies.

EADCO is exhibiting at the Paris Air Show in Hall H4, booth F-7.  We will look forward to the team’s progress.