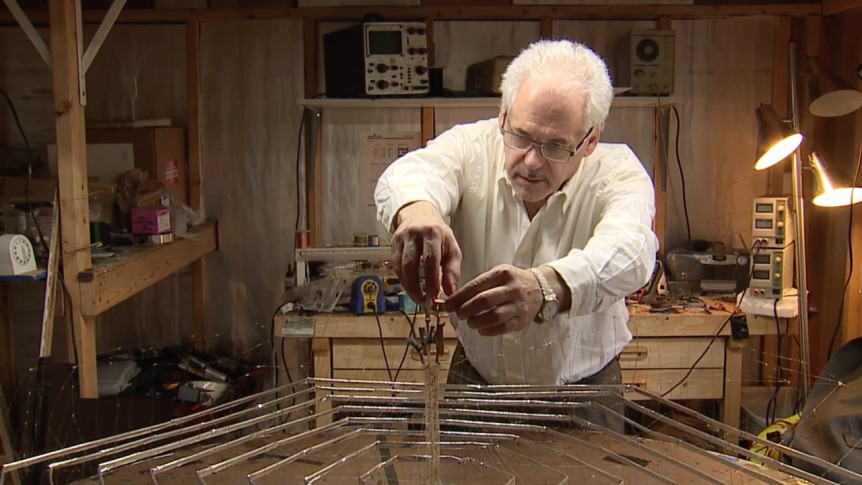 There seems to be great interest in ionic propulsion.  After we published “MIT’s Ionic Flyer – Solid State All the Way,” our editorial offices (otherwise known as your editor’s kitchen) received a comment from Ethan Krauss, who corrected the historical record.  He explains, “MIT was NOT “the first ion propelled aircraft of any kind to carry their power supply, as their video and paper say.  They don’t use less voltage, they are not more efficient, they are not the largest. Size was not the limit in the past.”

Click on image to see video of MIT’s first flights.

“They are the second in the world to be able to claim that they built an ion propelled craft that can carry its power supply. Their craft however, was launched with the assistance of a bungee cord, and large wings thereby reducing the power needed for its 10 second flight.”

The Cleveland Plain Dealer interviewed Mr. Krauss and reported: “‘Aviation started here in Ohio by two guys that everyone thought were just out of their minds,” Ethan Krauss said.  You could call Krauss, who is an electrical engineer, a modern-day Wright brother…. If you can move the air downwards without stirring it up too much, then you end up with a very efficient flying machine,’ Krauss said.  ‘The flying machine has no moving parts, it’s silent and creates no emissions. Possibly be a revolution in flight for light duty applications,’ said Krauss.”

Krauss responded to questions from your editor about whether a larger (say, person carrying)ionic propulsion lifting device could be powered by similar means.  “It is simply not correct to imply that lightweight lifters could carry their power supplies. The whole point is to be able to carry a power supply using ion propulsion. The power to weight ratio was 3 orders of magnitude too low. A larger heavier ion propelled device than MIT’s was flown in 2003 with an external power supply though.

“The first and only ion propelled invention ever that can both take off and fly with onboard power, is called the ‘Self Contained Ion Powered Aircraft.’  It is extremely well verified to predate the MIT device with onboard power. It also produces about 20 times as much thrust for its weight. ”

The patent,  provides details of how Krauss’s machine is constructed and how it works.

For Those Who Want One

A basic device, powered by an external source, can be assembled from balsa wood and aluminized Mylar film. These have been floating around in laboratories for several years, and are realizable for an enthusiast.

Skip the first minute or so, but then this video gets down to business.

These demonstrations illuminate a reality that ionic propulsion devices can fly, but questions remain as to whether these craft can be made into practical people or cargo carriers.  As they grow large enough and carry enough voltage and amperage to lift more substantial loads, will there be a substantial danger in their passage?  Things at such light weight and high voltages seem dicey at best.  TechtheLead.com reports about MIT’s efforts: “One of the first prototypes of the plane fried itself due to its black coating, as black color contains carbon, which conducts electricity. Those previous prototypes only managed to tumble to the ground seconds after being launched.

“The latest prototype, this time painted yellow, managed to sail through the air for almost 200 feet at 11 miles per hour (17 kilometers per hour). Unfortunately, it crashed into the nearest wall, but the fact still remains that the yellow prototype, dubbed simply Version 2, worked.”

As teams progress on their different paths, we might see some hope for more practical demonstrations of an interesting technology here on earth, rather than in propelling payloads toward Andromeda.