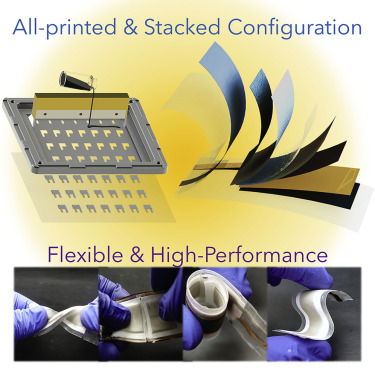 University of California at San Diego researchers headlined a report with fairly astonishing news:“A flexible screen-printed rechargeable battery with up to 10 times more power than state of the art.”  Combining their science with the manufacturing expertise of a hearing-aid battery maker, they have come up with a silver oxide and zinc battery that can be screen printed in normal lab conditions.  Normally, such production requires a sterile environment under vacuum.

So far, the battery technology seems to be limited to hearing air-sized coin cells, or in the case of UC San Diego’s work, printable displays on wearables.  On smaller scales, such batteries could be used to power Internet of Things (IOT) sensors and transmitters, alerting folks when an oven kicks on or the ketchup in the refrigerator is getting low.  One big question your editor has is whether this tech can successfully make electric vehicle batteries with significantly improved power and energy density to make a difference.

The jointly-produced paper by UC San Diego and battery maker ZPower is published in the December 7 issue of the scientific journal Joule.  Lu Yin, a co-author and Ph.D. student in Professor Joseph Wang’s UC San Diego research group, makes some graduate-level observations regarding the silver-zinc cells.  “Our batteries can be designed around electronics, instead of electronics needed to be designed around batteries.  The areal capacity for this innovative battery is 50 milliamps per square centimeter at room temperature—this is 10-20 times greater than the areal capacity of a typical Lithium ion battery. So for the same surface area, the battery described in Joule can provide 5 to 10 times more power.  This kind of areal capacity has never been obtained before.  And our manufacturing method is affordable and scalable.”

The summary for the article focuses on battery performance.  “The rise of flexible electronics calls for cost-effective and scalable batteries with good mechanical and electrochemical performance. In this work, we developed printable, polymer-based AgO-Zn batteries featuring flexibility, rechargeability, high areal capacity, and low impedance. Using elastomeric composites, the current collectors, electrodes, and separators can be fabricated via a high-throughput, scalable, and layer-by-layer screen-printing process and vacuum-sealed in a stacked configuration. The batteries are customizable in sizes and capacities, with the highest obtained areal capacity of 54 mAh/cm 2 for primary applications. Advanced X-ray tomography, impedance spectroscopy, and rigorous deformation tests were used to characterize the battery. The batteries were used to power a flexible E-ink display system that requires a high-current drain and exhibited superior performance compared to commercial lithium coin cells under the same pulsed-discharge conditions. The developed battery presents a practical solution for powering a wide range of electronics and holds major implications for the future development of high-performance flexible batteries. 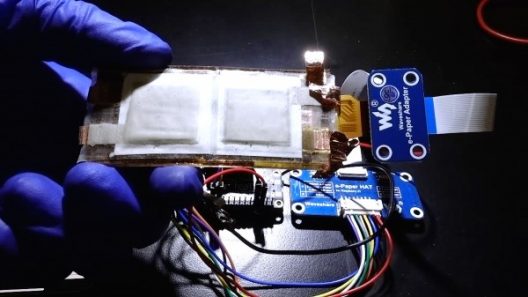 The battery is flexible, rechargeable and made by screen printing specially formulated inks.

With higher capacity brought about by lower impedance – resistance to alternating current – it can outperform “conventional lithium-ion batteries.  Zinc and silver in the right combination allows stability and high performance in the battery.

Jonathan Scharf, a co-first author of the Joule paper and Ph.D. candidate in the research group of UC San Diego’s nanoengineering Professor Ying Shirley Meng, sees the commercial potential for the cells in IOT applications.  “As the 5G and Internet of Things (IoT) market grows rapidly, this battery that outperforms commercial products in high current wireless devices will likely be a main contender as the next-generation power source for consumer electronics.” 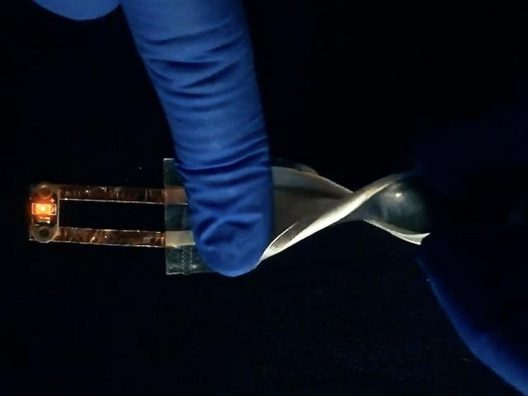 Even twisted this much, battery can still light LED

Consumer-based items could include clothing, which might even fall into “smart” categories.  The team’s batteries have successfully powered a flexible display system equipped with a microcontroller and Bluetooth modules.  Think of a flight jacket that carried its own communications abilities, including an emergency location transmitter (ELT).  Suitable for fairly rough wear, the batteries hold up to flexing and twisting and maintain capacity after 80 charge/discharge cycles.  Best of all, perhaps, the batteries are not flammable – important in clothing.

Meng, director of the UC San Diego Institute for Materials Discovery and Design focused on not only performance, but the manufacturing process.  To create the battery, the researchers used a proprietary cathode design and chemistry from ZPower.  Wang and his team contributed their expertise in printable, stretchable sensors and stretchable batteries. Meng and her colleagues provided their expertise in advanced characterization for electrochemical energy storage systems and characterized each iteration of the battery prototype until it reached peak performance.”

To maintain the stability necessary for a safe battery and the desired high performance levels, the team used a proprietary lead oxide coating.  Depending on the amount of lead involved, this might make the batteries unsuitable for certain applications or environments.  The specially developed coating allows silver oxide (AgO) to be used in a special ink for printing.  Batteries can be printed onto a high-temperature tolerant polymer film in seconds and dry and ready for use in minutes.  Future possibilities include high-speed roll-to-roll printing.  This would allow scaling up operations, but to what level is unclear at this time.  UC San Diego reports, “The team is already at work on the next generation of the battery, aiming for cheaper, faster charging devices with even lower impedance that would be used in 5G devices and soft robotics that require high power and customizable and flexible form factors.”