Of at least making it home at night.  Zero-Grid’s demonstrator looks like an electric green Zap!  Zebra sedan from the outside, but houses a wealth of creative energy, along with interior-filling racks of  batteries and an innovative charging and switching system.  While “range anxiety” is still a concern for buyers of even high-end pure electric cars, this hybrid system promises a final electricity-driven sprint even when the fuel runs out. 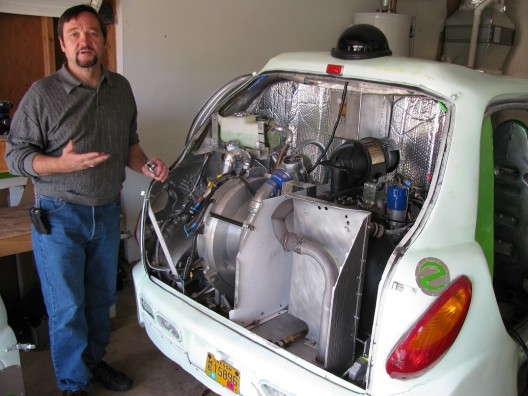 Using a “Battery Alternating Recharging Process” (BARP), Michael Hargett,the car’s inventor, says Zero-Grid’s Zero Kar™, with two or more individual battery packs and a hybrid generator, can recharge one battery pack while the other runs the car.  By alternating power and charging among multiple battery packs, the car achieves high mileage even for a hybrid, showing over 131 miles per gallon on average, with one run producing over 141 mpg.  It also has reasonable performance, topping 70 miles per hour: the original Zap! Car could only do about 45 mph on its batteries.  The Zero Kar can accelerate to 60 mph in 13 seconds, but considering the bulk of its proof-of-concept power system, such performance is not disappointing. 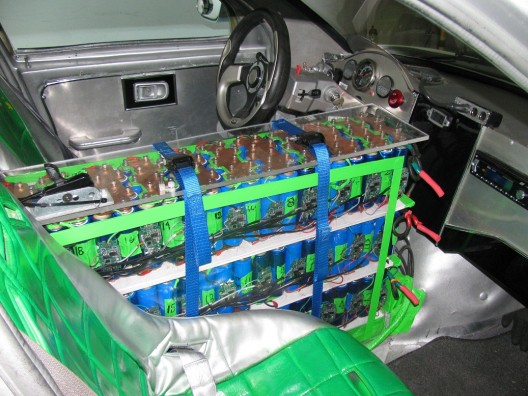 The prototype vehicle is filled with gear, including a Kohler V-twin engine that drives the two-foot diameter SEMA (Segmented ElectroMagnetic Array) generator, which charges the batteries arrayed in two layers between the rear firewall and the front seats, which in turn power the AC24LS, 15 kilowatt (20.1 hp) continuous, 20 kilowatts (26.8 hp) peak, Azure Dynamics motor nestled between the two rear wheels.

Zero-Grid claims recharging of the dormant LiFePO4 battery pack in a fraction of the time needed to run the working battery pack to a pre-set shut-off point, enabling transparent operation and continuous driving.   A special switchover mechanism transfers power from the battery pack going “off-line” to the one going “on-line” with no noticeable lag and no need for intervention from the driver. 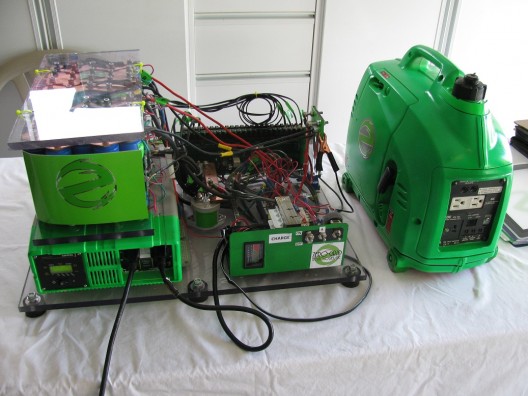 High mileage and redundancy should appeal to aircraft people, especially since the inventors are working on smaller, lighter packages.  A 2.5 kilowatt system, 52-pound system on a table top next to the Zero Kar is more compact, with two battery arrays next to a standard portable generator used to charge the system.  One’s mind conceives of such a system on a scooter or go-cart (or ultralight aircraft).  Senior Vice President of Engineering, John O’Gurley explains that a 60 kW system would take up only twice that volume with titanate batteries – which for now are being denied the experimenters, according to Hargett.

That same reduction in operational  bulk in the car would lead to a leaner, meaner machine, with possibly even better mileage.  Calculations show the possibility of 200 mpg in a small car.

Questioned about the very large SEMA generator, Hargett explained that the car had a secondary function – acting as a backup generator for the home in case of power outages – which happen frequently during wintertime storms in the Pacific Northwest. In fact, the car could provide emergency power to Hargett’s and eight lucky neighbors’ homes.  Zero-Grid’s web site shows the range of uses to which this technology can be adapted.

What was supposed to be a two-hour Q&A of the generator’s new function turned into an over seven-hour demonstration for engineers at the NASA Glenn Research Center in Ohio last June, according to Hargett, the unit also having generated intense interest.

Hargett and O’Gurley staged demonstration economy runs in which gasoline was measured in ounces and its use calculated against drive time, charging time, and miles per gallon.  They claim to recharge their battery packs in only 20-percent of total drive times.  The first of two July runs with their ZAP-Kar  proof of concept vehicle went 154.8 miles on 1 gallon, 8.8 ounces of unleaded, giving  144.8 miles per gallon.  The second average 131.62 mpg.  Both tests followed federal Department of Transportation criteria, with stop-and-go driving in urban and rural environments and at least a brief run on nearby Interstate 5.  Speeds ranged from 25 to 65 miles per hour.

Zero-Grid has received ride-along local TV coverage in their proof-of-concept vehicle, and the team will be installing their systems in a more aesthetically-pleasing line of electric vehicles produced by GGT electric vehicles (GreenGo Tek LLC).

We look forward to ongoing developments for this ingenious hybrid system.