Combine nano-anything with graphene, and that seems to describe most of what’s driving physics and chemistry laboratories at our major universities.  The blog reported last week on Princeton researchers who’ve created a thin, flexible solar cell that absorbs 96-percent of received light and draws energy from off-axis and varied wavelengths of light.

MIT researchers, too, have created a thin, flexible solar cell, but one based on layers of flexible graphene sheets, each coated with a layer of nanowires.  Besides flexibility, these sheets offer transparency, enabling their use on windows as well as other surfaces. 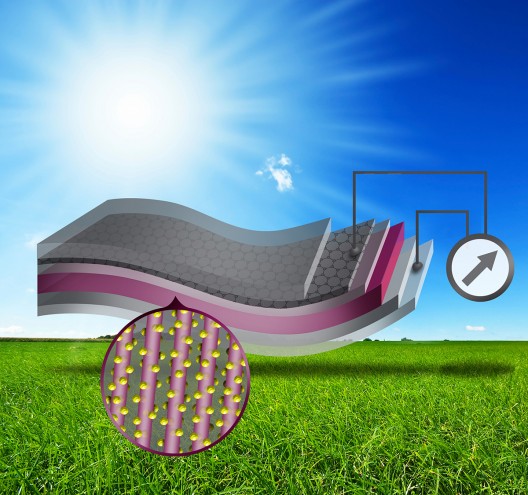 Layered structure of the new device, starting with a flexible layer of graphene, a one-atom-thick carbon material. A layer of polymer is bonded to that, and then a layer of zinc-oxide nano wires (shown in magenta), and finally a layer of a material that can extract energy from sunlight, such as quantum dots or a polymer-based material.
Illustration courtesy of the research team

David Chandler, reporting for MIT states that the new cells may prove to be far less expensive than today’s silicon equivalents, which require high-purity silicon that undergoes crystallization and extremely thin slicing.  Alternatives use indium tin oxide (ITO), itself an expensive substitute for or adjunct to silicon.  Nanostructured cells such as that from Princeton may allow lower-priced material, although one version uses a gold foil top layer.

Gradečak  says, “Currently, ITO is the material of choice for transparent electrodes” used in smartphone touch screens.  Graphene, made from common carbon, should be a budget alternative to ITO.  It’s also flexible, light weight, has good mechanical strength and chemical robustness.

Using the graphene material is not easy, though, because trying to place semiconductor nanostructures on graphene disturbs its electrical and structural properties.  MIT researchers coated the graphene with polymers, then bonded a layer of zinc oxide nanowires to that, and over that, a layer of lead-sulfide quantum dots or P3HT polymer – both of which respond to light waves.

“’We’ve demonstrated that devices based on graphene have a comparable efficiency to ITO,’ she says — in the case of the quantum-dot overlay, an overall power conversion efficiency of 4.2 percent — less than the efficiency of general purpose silicon cells, but competitive for specialized applications. ‘We’re the first to demonstrate graphene-nanowire solar cells without sacrificing device performance.’”

Processing can be done at temperatures below 175 degrees Celsius, much lower than silicon solar cell manufacturing.  The process is scalable according to Hyesung Park, the report’s fellow lead author.

MIT explains the process.  “The graphene is synthesized through a process called chemical vapor deposition and then coated with the polymer layers. ‘The size is not a limiting factor, and graphene can be transferred onto various target substrates such as glass or plastic,’ Park says.

“Gradečak cautions that while the scalability for solar cells hasn’t been demonstrated yet — she and her colleagues have only made proof-of-concept devices a half-inch in size — she doesn’t foresee any obstacles to making larger sizes. ‘I believe within a couple of years we could see [commercial] devices’ based on this technology, she says.”

Using graphene as a transparent electrode is not a new idea, but László Forró, a professor at the Ecole Polytechnique Fédérale de Lausanne thinks, “This work is a real breakthrough,” and “Excellent work in every respect.”