Seeing the Amprius web site, one would never know that some “dramatic improvements” promised in the terse announcement might mean so much in terms of true breakthroughs.

Amprius’s silicon technology was originally developed at Stanford University and enables dramatic improvements in the energy density and specific energy of Lithium-Ion batteries.

But the battery manufacturer has two first-generation product offerings with volumetric energy densities of 580 Watt-hours and 600 Watt-hours per liter.    Most lithium batteries fall into a range from 250-500 Wh/l., putting the new cells at the upper limit of such batteries.  Both Amprius batteries are now in production and available to original equipment manufacturers, ready for use in smartphones and tablets. 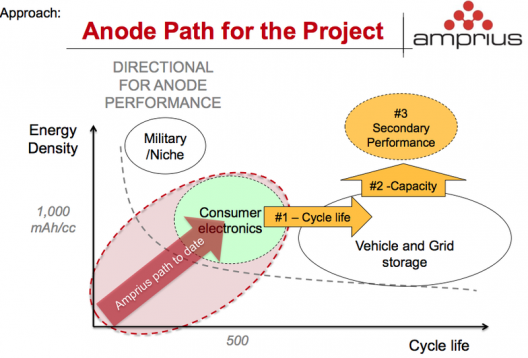 Professor Yi Cui helped develop Amprius’ technology at Stanford University and helped found the company.  He has spoken at several CAFE Foundation Electric Aircraft Symposia, where he explained the challenges of creating a 10X silicon battery.

In terms of energy density, silicon has more than 10x the theoretical capacity of carbon (4,200 mAh/g compared to 370 mAh/g), charging a lithium silicon cell to expand up to 400 percent, leading to internal fracturing and destroying the battery in a few cycles.  Amprius’ answer is to use a new, nanostructured silicon-based anode material to counter such swelling and add to battery life.

Much of the new technology and the milestones achieved so far is spelled out in a 2012 presentation for the U. S. Department of Energy.

One drawback may be the 500 or so charge/discharge cycles achieved so far.  Most lithium cell makers promise 1,000 or more cycles, and some, like Toshiba’s SCIB, can demonstrate over 5,000, although at lower energy densities.  This is an ongoing battle in battery development: high power or energy densities equate to shorter cycle life.

The introduction of the second and third-generation Amprius units may see improvements in Wh/g, Wh/l and cycle life, though, a milestone on the road to the 10X battery Dr. Cui has been attempting to craft for the last decade.