Thirty years ago, Claude Chudznik developed a beautiful little canard that flew on a 25-horsepower two-stroke engine.  The elegantly tiny craft performed well enough on its noisy (“almost unbearable” according to the team’s blog) engine that the team of Chudzik, Frédéric Laude, Rémy Audebert, Eric Favereau, Patrick Quiertant and Gilles Aubin decided to take it out of mothballs, repower it with an Electravia GMPE-E 205 50-hp system (batteries, controller and motor), and take to the skies again. 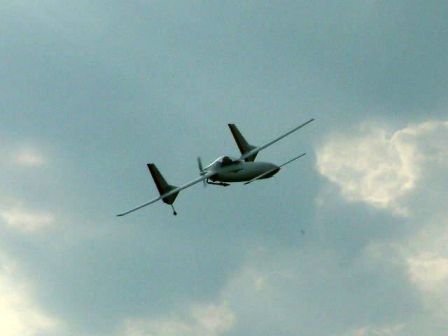 They are close to that goal, having recently reassembled the wings and canard to the fuselage, fitted batteries, motor and an EFIS (Electronic Flight Instrument System) and Electravia E-Screen ES-TX26RSD motor and battery monitoring screen.  The simple, mini-glass-cockpit fits well within the confines of the small craft.

This high-performance instrumentation complement the potential of this electrified and resurrected airplane, now with a motor twice its original power.  It flew at more than 200 kilometers per hour (124 mph) on its two-stroker (the engine now up for sale), and the team is hoping for “closer to” 300 (186 mph) on battery power.

Judging from photos on their site, partners spent time reconfiguring the original open and boxy engine mount and cowling into a more streamlined and aerodynamic shape, and that, coupled with removal of a long expansion chamber and exhaust pipe for the internal combustion engine, helps the airplane’s appearance and probably performance.

CC01 was inspired by Burt Rutan’s Vari-Eze/Long-Eze configuration but has a retractable in-line gear somewhat like that on B-47s and B-52s, with outrigger wheels under the wing-mounted rudders.

Claude Chudzik designed the CCO1 30 years ago, and was a pioneer in the ULM movement.  He has designed, built and flown a spectacular three-surface airplane in the years between completion of the CC01 and its renewal as an electric craft.  Working for Snecma as an engineer, he helped develop the SMA Diesel engine. 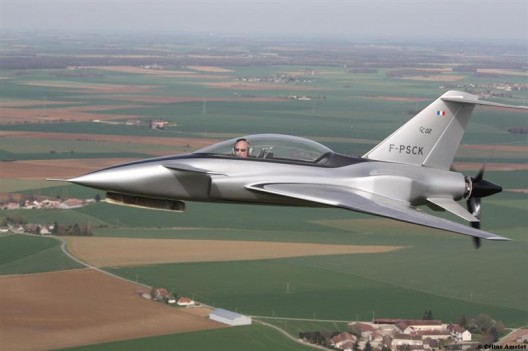 Frédéric Laude, an RV7 builder, saw the CC01 in a trailer, and persuaded Chudzik to transform it to electric power.  The other partners are all involved in aviation and have built or restored other aircraft.  We wish them the best in bringing their three-decades old airplane into the 21st century. 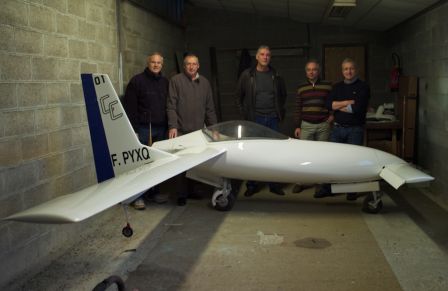 The team with the newly revived CC01 Electron, almost ready for flight