Acentiss is a German engineering and consulting firm specializing in medicine, aerodynamics, and recently, the creation of two small electric motors for light aircraft.  Located almost symbolically between Robert Koch Strasse (Nobel Prize in Medicine) Max Plank Strasse (Nobel in Physics), and EinsteinStrasse (Nobel in Physics) in Ottobrunn, the company not only provides design services for wind turbines and their components, assistance with process flows for the manufacture of medical equipment and devices, and consultancy services for the automotive and aeronautical industries, but has created components for use on light aircraft and unpiloted aerial systems. 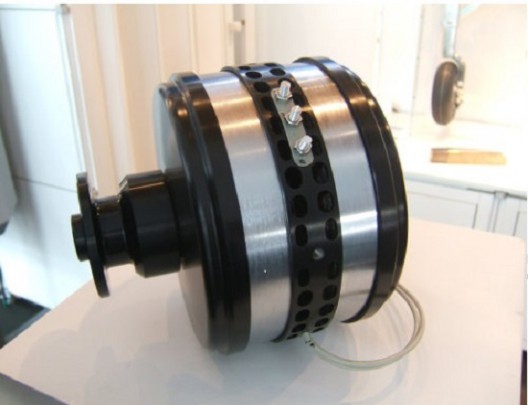 Their motors, developed with assistance from Geiger Engineering, look a great deal like the HP-25D from that company, often seen flying on PC-Aero aircraft.  The two motors, both 218 millimeter (8.6 inches) in diameter, produce a maximum of 32 kilowatts (42.8 horsepower) or 40 kW (53.6 hp).  The smaller motor can produce 25 kW (33.5 hp.) continuously at a leisurely 1,950 rpm, and the larger (thicker) motor can generate 32 kW at 2,200 rpm.  Both motors run at 58 Volts, meaning a high amperage helps create the torque to turn a propeller at low rpms.  Many think low voltages will provide greater safety for operators.

The less powerful motor weighs 8.9 kilograms (19.6 pounds) and the more powerful 11 kilos (24.2 pounds).  This light weight, coupled with the weight of the recommended dual motor controllers from Geiger Engineering that weigh only one kilo (2.2 pounds) each

Tandem rotors on both power plants can run independently, the same as those on the Geiger HP-25D, enabling economical flight on one rotor, or a “get-home” mode at half power that will at least stretch the glide in the event of one rotor or controller failing.

Acentiss is flying the motor on a modified PC-Aero Elektra One, but one which mounts Acentiss’ retractable tricycle landing gear.  For surveillance operations, The Acentiss Elias pulls the gear inside the fuselage for the nose wheel, and inside the wings for the main wheels, making an unobstructed view for belly-mounted cameras and sensors.  The gear weighs only 22 kilograms (48.4 pounds), a creditable weight for something that allows higher performance for an already clean airframe.  Solar cells can extend the airplane’s range and endurance.

The 11-meter (36-foot) span, 320 kilogram (704 pound) craft can carry batteries sufficient for 1.5 hours’ endurance, and significant test gear that can be monitored by an Acentiss Ground Control Station (GCS).  Depending on whether a pilot is on board, the system can monitor and control, by visual or data transmissions, the mission based on pre-set plans or manual over-rides.  It can check the multi-spectral, high-definition sensors on board Elias and record their output.

Beyond the interesting pair of new motors, Acentiss, with its many fingers in many technological pies, may pull out a surprising number of plums in the near future.